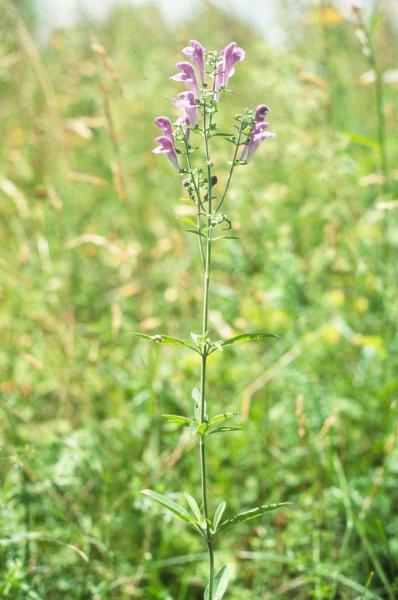 All of our existing populations were discovered in the 1990s while none of the 13 historical records have been rediscovered. The genus name is from the Latin, scutella, which means dish and refers to the appendage at the base of the flower while the species name means leaves without teeth (Fernald, 1970).

There are four existing populations but all of them consist of fewer than 100 plants each. There are 13 historical records but most of them have been searched or are located in areas that are highly developed and are considered extirpated.

The existing populations have not been resurveyed so short-term trends remain unknown. Some populations are small and unprotected so they may not persist.

Most of the historical records are extirpated or have little chance of being rediscovered and only four small populations remain in the state. If surveys fail to locate new populations this negative trend could continue.

Succession of open grassland and meadow habitat to woody plants is a threat. More study is needed to determine if deer browse threatens populations.

Study the habitat preference of this species to determine why it is not more widespread in seemingly common habitat.

More information on the habitat preferences of Hyssop-skullcap in New York State is needed. It has been collected from old fields and grassy openings within upland forests, roadsides, shrub swamps, and the shorelines of artificial ponds. Many of the historical records are from Long Island and Staten Island, where presumably it occupied quite different habitats from the extant sites in the Hudson Valley (New York Natural Heritage Program 2007). Borders of woods, thickets and clearings (Fernald 1970). Fields and open woods, especially on the coastal plain (Gleason & Cronquist 1991).

Historically this species was known from Long Island, Staten Island, and the Lower Hudson Valley as far north as Orange County. Today, the only extant records are from Orange, Rockland and Ulster counties.

New York is at the northern edge of the range of this species, which is considered extirpated in Massachusetts and endangered in Connecticut. Its range extends south along the coast to Florida and west to Texas and Oklahoma, and up the Mississippi and Ohio Valleys to Missouri, Tennessee, Kentucky, Ohio, and West Virginia.

Hyssop-skullcap is a showy perennial wildflower with the square stem and 2-lipped flowers typical of the mint family. The stems are densely hairy and 3-7 dm tall, erect, and with branches from the leaf axils. The bottom leaves are egg-shaped, crenate, and on petioles, differing from the middle ones which are lance-shaped, sessile or nearly so, and 2-6 cm long. The upper leaves become progressively narrower than the ones below. The flowers are arranged in an ascending, terminal raceme. They have blue (sometimes pink) petals 18-28 mm long, with the middle of the upper lip curved into a helmet-shaped bump.

This plant is best identified when flowering or fruiting.

The shield-shaped protuberance, or bump, at the base of the calyx identify this plant as a Scutellaria. Among New York skullcap species, the combination of having entire middle and upper leaves and flowers arranged in a terminal raceme should be distinctive.

This species flowers in June, and the fruits are present from July through September.

The time of year you would expect to find Hyssop Skullcap flowering and fruiting in New York.