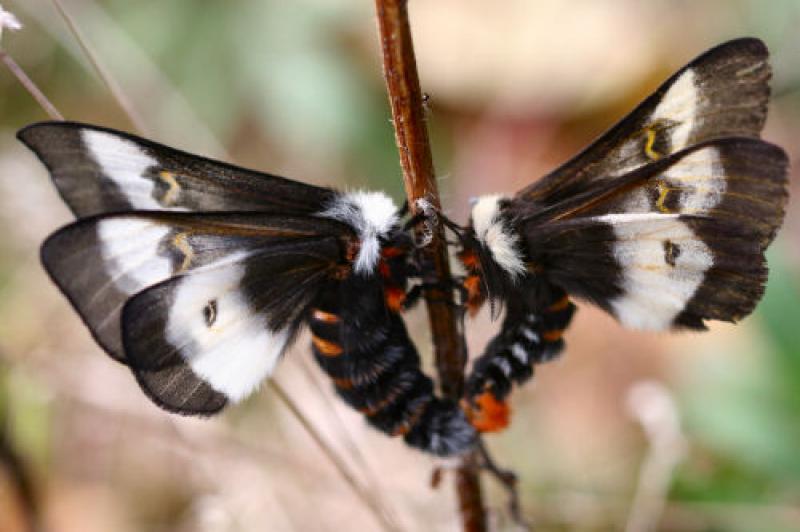 The inland barrens buckmoth is an oak feeding buckmoth. The eggs are laid on scrub oak or dwarf-chestnut oak and the larvae feed on these plants, although older larvae may wander to other trees.

Only three occurrences have recently been documented and one of these has not been verified as extant since 1985. However, the recent discovery in the Shawangunks and the rediscovery on the Kittatinny Ridge in nearby New Jersey indicates there is the potential for a few more occurrences of this subspecies in this region of New York. The state rank does not include the Long Island populations which are considered taxonomically distinct.

There has been a substantial to large decline (approximately 50%-90%), based on a loss of the original habitat.

The threats include habitat loss and fragmentation. Other possible threats include exotic parasitoids, habitat management issues, and spongy moth (Lymantria dispar) caterpillar spraying. Larvae of this subspecies are documented to be highly sensitive to Bt (Bacillus thuringiensis - a bacterial biological control used on spongy moth caterpillars) (Peacock et al., 1998). The larvae appear to be able to survive even severe defoliation, however. Based on observations by Dale Schweitzer in New Jersey, late instars are very tolerant of starvation, can usually find an alternate foodplant while the oaks refoliate, and manage to survive but subsequently pupate later than normal. In such situations they will eat black huckleberry and dangleberry which even spongy moth larvae accept sparingly.

At the Albany Pine Bush, increased prescribed burning should benefit this buckmoth.

Information on the exact habitat requirements of southeastern New York populations is needed.

The Albany Pine Bush and Glens Falls populations are on remnants of once extensive sand plain pine barrens which is typical for the species at this latitude. Such populations occur in scrub oak areas with almost no tree cover or a sparse pitch pine canopy. Recent photographs of larva from the Shawangunk Ridge in southeastern New York indicates that some scrub oak habitats in this region support populations as they do in adjacent northern New Jersey. The northern New Jersey population is found in scrub oak areas, but in general, the habitats for these ridgetop occurrences are not well understood and it possible they could occur in other dry scrubby situations.

There are only three isolated occurrences documented in New York ranging from Glens Falls, the Albany Pine Bush, and the Shawangunk Ridge. Originally, the species was likely more widespread in the mid-Hudson Valley, where it still occurs in the Albany Pine Bush. It was last documented in the Glens Falls barrens in the mid-1980s. It is difficult to assess the extent of the Orange County occurrence, but this population cluster also has nearby occurrences in New Jersey.

This subspecies ranges from inland Massachusetts, and probably farther northeast into Maine, to Missouri, south to coastal Louisiana, North Carolina and northern Georgia. It is unclear whether the Florida populations should be included since at least some larvae in that state appear to differ from larvae in New York. Populations that are excluded from this subspecies are in central Texas (H. maia peigleri), and in coastal southeastern New England and Long Island, New York (NatureServe subspecies 5).

This is the widespread oak feeding buckmoth of the eastern United States that is found mostly from southern New Jersey to Missouri and southward, but has isolated colonies inland north well into New York and at least formerly Maine.

The subspecies taxonomy suggested by NatureServe is followed here. Populations on Long Island and coastal southeastern New England are considered a separate subspecies. For New York, this means Hemileuca maia maia refers only to the more normal mainland populations, which are known from Glens Falls and Albany southward to the Shawangunk Ridge in Orange County. Maculation (spotting) of larvae and almost all adults, and morphological characters of these mainland New York populations, appear to fall within the variation of the more variable southern populations which NatureServe and most literature consider typical H. maia maia, although New York and other far northern populations do differ in their close association with scrub oak. The Albany area population has probably been isolated for a long time and has, or had, a very rare form in which the white forewing band is completely missing. Apparently, such a form is not known from any other eastern United States population of any species of this genus. Tuskes et al. (1996) illustrate a Long Island adult, as well as more normal adults. Wetland buckmoths are not considered part of this species.

Adult buckmoths are unmistakable as a group and nearly always can be identified to species by habitat, which would be scrub oak barrens for this species, and to subspecies by range, which in New York means any place other than Long Island. Young larvae are found in clusters on scrub oak in May and are black and spiny. They could be confused with Mourning Cloak larvae, but these are usually on willows or elms. Older larvae differ from other species and also from populations on Long Island in not having extensive yellow dorsally or a yellow lateral line. The last instars are described as plain blackish with no real pattern, but sparsely sprinkled with pale flecks. Populations south of New York are more variable and those in the southeastern region of New York could be variable as well.

This buckmoth is found among scrub oaks or on dry ridgetops with scrub oak or possibly other shrubby oaks. It does not occur in wetlands although an individual could stray into a wetland.

The eggs are laid on scrub or dwarf chestnut oak and the larvae predominately feed on these species. Later instars (stages) wander to other foodplants such as cherry and willow.

The adult flight season is brief, probably no more than two weeks in a given year. In the Albany Pine Bush, the flight season starts on a sunny day soon after about September 25 and usually peaks the first week of October. The flight period should run a few days later south of there, and perhaps a few days earlier at Glens Falls. The eggs probably hatch before May 15 in warm springs, but May 20 is generally about average. They hatch while the scrub oak foliage is expanding and larvae must reach fourth instar before this foliage hardens. After the fourth instar, the growth slows and the last instar can take up to a month. Female larvae feed about a week longer than males. Pupation starts about mid-July and most are in the soil by the end of the month. While most pupae diapause (a period where growth is suspended; i.e, a dormant period) only a few weeks and eclose (emerge as an adult from the pupal case) the same autumn, probably about 10-30% overwinter and eclose in the second autumn. In states farther south, a few pupae overwinter two or three times and this might also happen in New York. A viable population will always have pupae in the soil. In contrast to southern populations, the Albany area adults are active only in sunny, hazy, or partly cloudy weather. They may abruptly cease flying if a large cloud obscures the sun, especially on a cool day. Males fly mostly between 10:00 am and 2:00 pm, and mating occurs during this time. Most females mate a few hours after eclosion. Mated females rest briefly and then take flight that afternoon when they locate a suitable oak and lay an egg ring. If it is sunny, the female usually flies a second time and she lays another egg ring if a suitable oak is found quickly enough. However, many females manage to lay only one egg ring the first day and the second egg ring is then laid on the next sunny day when oviposition is sometimes preceded by a second mating. Early instar larvae also feed mostly in sunny weather. Older larvae are less fussy, but still feed mostly in the daytime and are lethargic in cool weather.

The time of year you would expect to find Inland Barrens Buckmoth reproducing, larvae present and active, eggs present outside adult, and pupae or prepupae present in New York. 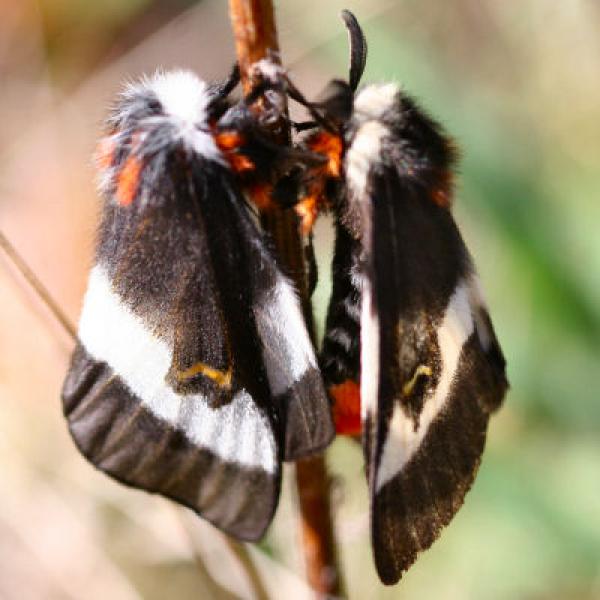 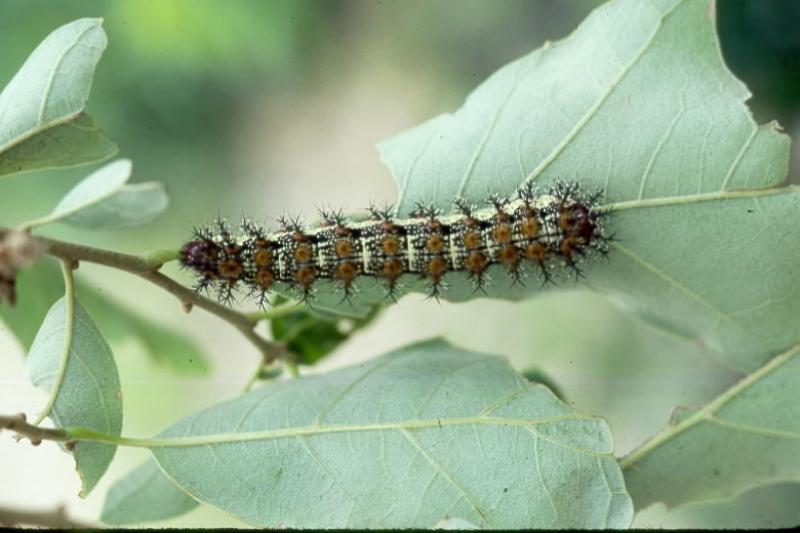 The subspecies taxonomy suggested by NatureServe is followed here. Populations on Long Island and coastal southeastern New England are considered a separate subspecies. For New York, this means Hemileuca maia maia refers only to the more normal mainland populations, which are known from Glens Falls and Albany southward to the Shawangunk Ridge in Orange County. Maculation of larvae and almost all adults, and morphological characters of these mainland New York populations, appear to fall within the variation of more variable southern populations which NatureServe and most literature consider typical H. maia maia, although New York and other far northern populations do differ in their close association with scrub oak. The Albany area population has probably been isolated a long time and has or had a very rare form in which the white forewing band is completely missing. Apparently, such a form is not known from any other eastern United States population of any species of this genus. Tuskes et al. (1996) illustrate a Long Island adult, as well as more normal adults. Wetland buckmoths are not considered part of this species.