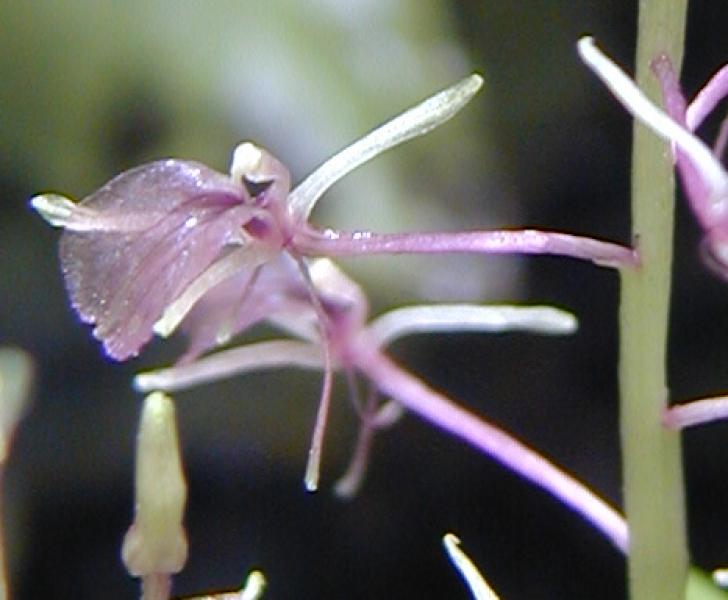 Over the decades there have been many arguments as to whether this species name is spelled with one i or a double i. It has been shown that the correct spelling should be with a double i. The flowers are pollinated by flies and the seeds can germinate and grow only in association with a specific mycorrhizal fungi that is the same throughout its range (Mattrick 2004).

There are eight existing populations but only one has more than 100 plants. All other occurrences contain five or fewer plants. There are 52 historical records but most of them do not contain specific enough location information to relocate the plants that occur only in small numbers. Many of the occurrences from the Lower Hudson region could be extirpated.

Four of the existing eight populations have been resurveyed and the plants still existed in three of them. It seems that populations tend to remain at low numbers for many years. All populations should be checked to better understand short-term trends.

There are 52 historical records but now only eight existing populations so it seems that there has been a substantial decline over the last 100 years. Many historical records are from highly developed areas with high deer populations even though substantial natural areas exist where small populations of orchids could remain. The small number of plants in a population could make them difficult to relocate and they may be more common than we think. The maturation of early to mid-successional forests where this species thrived has reduced populations from the late 1800s and early 1900s when these habitats were dominant.

Potential threats to existing orchid populations are flooding by beaver activities or the draining of their swamp habitat. Spraying insecticides to control mosquitos may inadvertently kill the flies that pollinate this orchid. Populations are also threatened by forest maturation from the early to mid-successional stages that this orchid prefers. Inbreeding depression may also reduce populations (Mattrick 2004).

Establish sufficient buffers around populations to preserve the hydrology of their habitat. Experiment with different forest management techniques to observe whether different successional stages increase populations.

Research is needed to determine why almost all populations contain only a few plants while one population contains over 100. It should also be studied whether deer significantly affect this species and whether populations can be increased by forest management.

In New York Large Twayblade is known to occur in a variety of both upland and wetland habitats. It has been found in several red maple-dominated swamps with a substrate of sphagnous peat, growing on hummocks. In contrast it also occurs in dry woods on limestone-influenced soil and wooded talus slopes, and along RR grades at the edge of swamps (New York Natural Heritage Program 2007). Loamy or sandy woods and clearings (Fernald 1970). Rich woods (Gleason 1952). Rich woods (Gleason & Cronquist 1991). Brushy second-growth thickets and mixed woods, floodplains, pine plantations (Voss 1985). Often growing on seldom used paths or old logging roads through mixed woodland (T. Weldy pers. comm.). It seems Liparis liliifolia is an early to mid-successional forest species that prefers areas that are recovering from disturbance. It appears to prefer a small window of succession after aggressive weeds have declined and before the canopy provides too much shade (Mattrick 2004).

Lipais liliifolia is found at scattered locations throughout New York State except in the far north.

New York is at the northern edge of the range of Large Twayblade, which occurs in the northeastern and Midwestern States, from Vermont to the very northern portions of Georgia, Alabama, and Mississippi, and from southern Ontario, Michigan, and Wisconsin south to Arkansas.

Large Twayblade is a perennial orchid species growing up to 25 cm tall from a bulb-like root, with only a single pair of basal leaves and one central flowering stalk. The leaves are smooth, oval, 5-15 cm long, and entire. They are somewhat shiny, with parallel veins, and their bases form a sheath around the stem. The flowers are light green and mauve-purple. The broad, translucent purplish, drooping lateral petals (forming the lip) are 7-10 mm long and about as wide, contracted at the base into a darker purple spur. The fruit are dry capsules, shorter than their 11-18 mm long pedicels (stalks).

Large Twayblade is most easily identified when in flower, though fruiting individuals may also be determined.

Tipularia discolor (Cranefly Orchid) is another woodland orchid with many purplish-green blossoms on a leafless stalk, but it has a single, winter-green leaf, and much narrower and otherwise distinctive flowers.

Large Twayblade flowers from June through mid-July, and the fruits persist into October.

The time of year you would expect to find Lily-leaved Twayblade flowering and fruiting in New York. 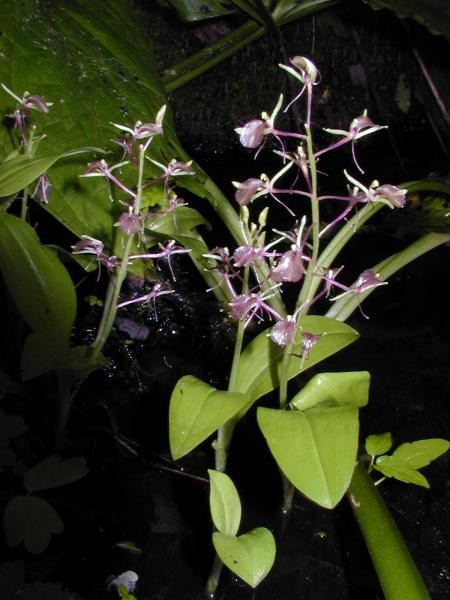 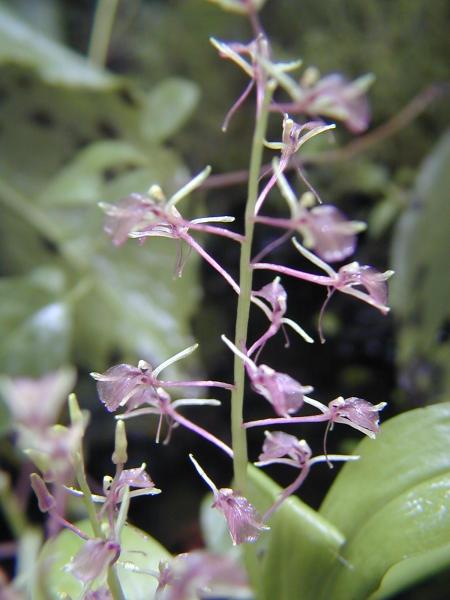 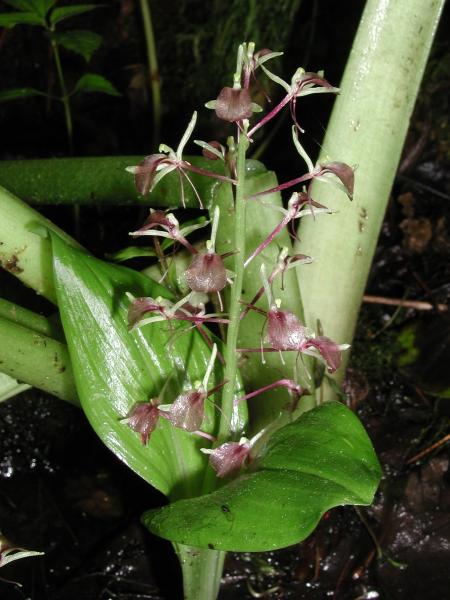