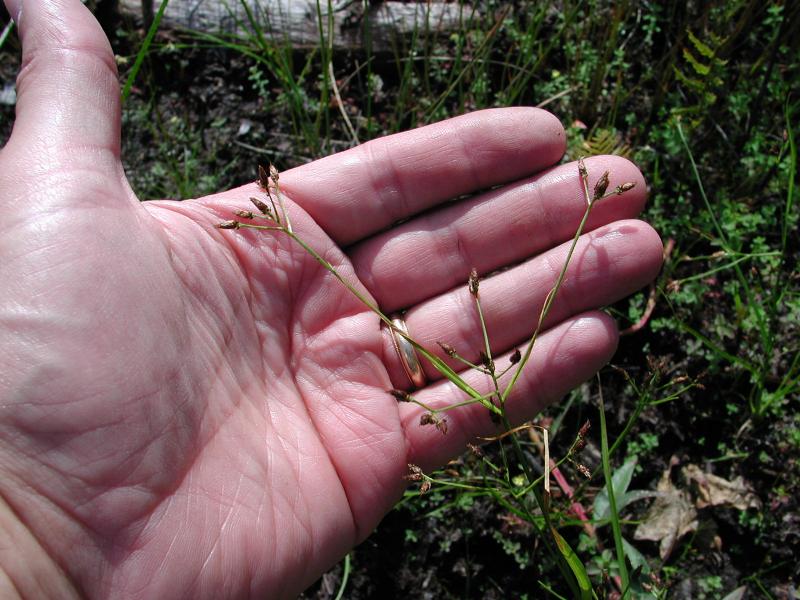 Even though the common name is long-beaked beakrush this species is truly a sedge and not a rush. The specific epithet "scirpoides" means Scirpus like. Scirpus is another genus in the sedge family (Fernald 1970).

Many of the known extant populations were first documented within the past 25 years. It is likely these populations were simply overlooked in the past. It is difficult to determine trends with this species as its populations fluctuate in size depending on pond water levels during a particular year. No populations are known to have become extirpated in recent years. Overall, short term trends are not clear but may indicate that this species is stable.

This species is threatened by disturbances caused by residential development especially along pond shores. It is also threatened by off road vehicles disturbing the habitat where it occurs.

The ponds should be protected from use by off road vehicles and from development. The hydrology of sites where the species occurs needs to be maintained.

In New York, this species occurs predominately on mucky or sandy soils on the margins and drawdown zones at the edges of coastal plain ponds in pine barrens of eastern Suffolk County, Long Island. When water levels stay high in these ponds, the available habitat and therefore the number of plants, are limited. It also occurs in bog-like or inland poor fen habitat with rich, peaty, acidic, and mucky soils (New York Natural Heritage Program 2002). Limesink ponds, usually at the lower margins of pond-shores, wet savannas, beaver ponds, and other wetlands with "drawdown" hydrology (Weakley 2007). Moist to wet sands or peats of banks of streams and ditches, ponds and lakeshores, depressions in savannas, marshes, often in moist to wet disturbed areas (Kral 2002). Wet sandy soil (Gleason and Cronquist 1991). In Michigan, occurs on sandy-mucky shores, sandy-peaty lake beds, and in a marly bog (Voss 1972). Peaty and sandy shores and swamps (Fernald 1970).

This species occurs from southeastern Massachusetts south along the coast to the panhandle of Florida and west along the Gulf Coast to Texas. It is also disjunct around the Great Lakes in Michigan, Wisconsin, and Indiana, and occurs in the West Indies (Kral 2002, Weakley 2007).

Long-beaked beakrush is a grass-like annual herbaceous plant that grows in clumps and is generally 30 to 80 centimeters tall. The leaves are narrow and strap-like. The stems are stiff and leafy. Clusters of minute inconspicuous flowers occur on secondary branches which arise from axils and summits of the stems. The flowers develop into small inconspicuous fruits (Kral 2002).

The easiest time to identify this species is when it has mature fruits.

This species varies from year to year in abundance depending on pond levels. It is more abundant and productive during years of low water. The plants start to fruit in mid to late July and fruits persist till early October. Since fruiting individuals are easiest to identify, surveys should be conducted between early August and late September when plants have mature fruits and they are not readily shedding.

The time of year you would expect to find Long-beaked Beak Sedge fruiting in New York. 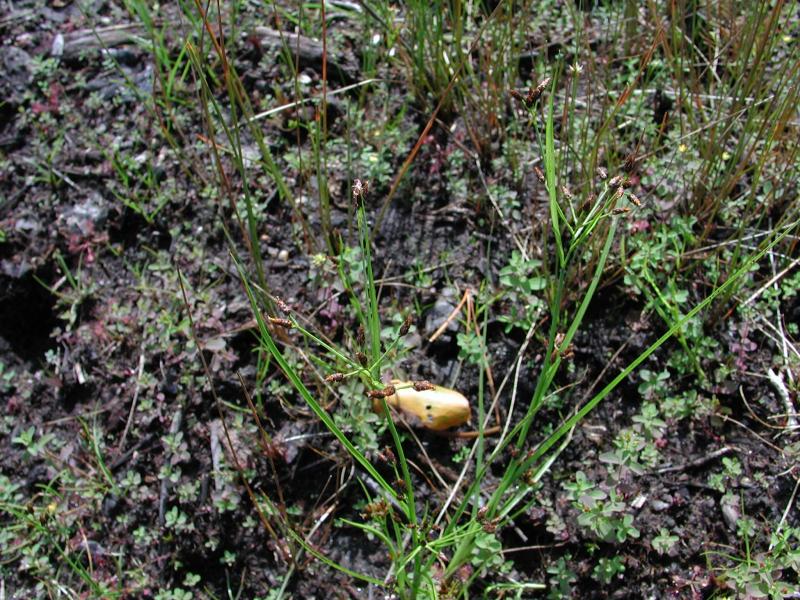 This species was transferred to the genus Rhynchospora Vahl from Psilocarya Torr. in 1867 by Asa Gray (Gray 1867). The year before under the species Rhynchospora brevirostris Grisebach (1866) states "Affinis [like] R. scirpoidi (Psilocaryae Torr.) sed achenium laeve [but smooth achene]". Some authors (Gleason and Cronquist 1991, Kral 2002) accept Grisebach's transfer to the genus Rhynchospora as validly published and use the author citation Rhynchospora scirpoides (Torrey) Grisebach while others (Kartesz 1994, Weakley 2007) accept Gray's transfer as the first validly published transfer and use the author citation Rhynchospora scirpoides (Torrey) A. Gray.