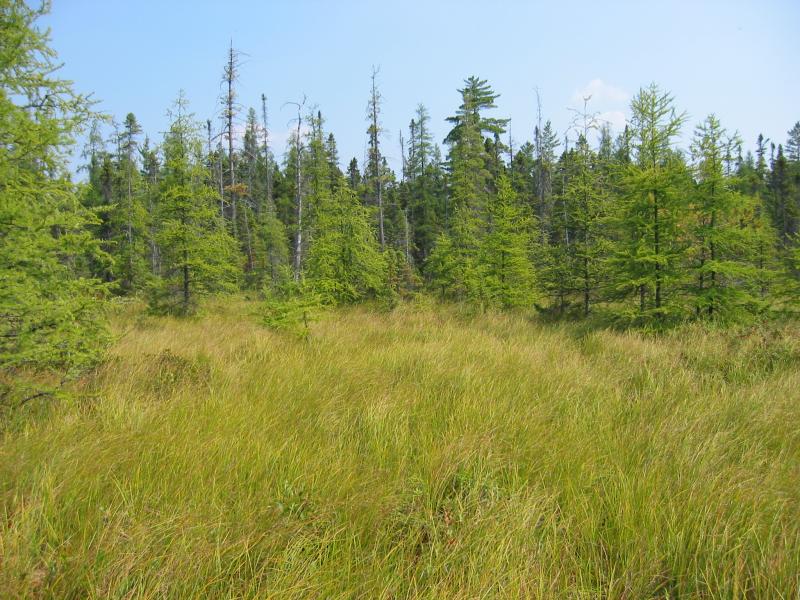 Did you know that certain inland poor fen plants, such as pitcher plants, use insect larvae to "eat" insects? Most plants receive their nutrients from the soil. However in nutrient poor soils of inland poor fens these plants digest insects to receive their nutrients. The pitcher plant has a hood-like "pitcher" leaf that holds water and nectar glands that attract insects. Insects are forced down the "pitcher" leaves into the water by downward pointed hairs. The insect is broken down by microorganisms and insect larvae that live in the plant's water. The nutrients from the insects are taken in by the plant. By early summer, the insect larvae reach their adult stage and fly away from the pitcher plant.

There are several thousand occurrences statewide. Some documented occurrences have good viability and are protected on public land or private conservation land. This community is widespread throughout upstate New York, and includes several very large, high quality examples. The current trend of this community is probably stable for occurrences on public land, or declining slightly elsewhere due to moderate threats related to development pressure or alteration to the natural hydrology. This community has declined moderately to substantially from historical numbers likely correlated with peat mining, and logging and development of the surrounding landscape.

The numbers and acreage of inland poor fens in New York have probably remained stable in recent decades as a result of wetland protection regulations. There may be a few cases of slight decline due to alteration of hydrology from impoundments (conversion to other palustrine community types).

The numbers and acreage of inland poor fens in New York have probably declined moderately to substantially from historical numbers likely correlated with initial peat mining and logging of the surrounding landscape (increasing nutrient run-off into fens).

Survey for occurrences statewide to advance documentation and classification of inland poor fens. A statewide review of the acidic peatlands is desirable, similar to the studies done in New Hampshire (Sperduto et al. 2000), Massachusetts (Kearsley 1999), and similar to what New York Natural Heritage did for rich fens (Olivero 2001).

Research is needed to fill information gaps about inland poor fens, especially to advance our understanding of their classification, ecological processes (e.g., fire), hydrology, floristic variation, characteristic fauna, peat development, and succession. This research will provide the basic facts necessary to assess how human alterations in the landscape affect peatlands, and supply a framework for evaluating the relative value of poor fens (Damman and French 1987).

This community is widespread throughout upstate New York, north of the North Atlantic Coast Ecoregion. It is probably represented by different regional variants. It is concentrated in the Northern Appalachian Ecoregion where it approaches large patch size in a few occurrences.

The range of this broadly-defined community may be worldwide. Examples with the greatest biotic affinities to New York occurrences are suspected to span north well into Canada, west to Minnesota, south possibly to West Virginia, and southeast to North Carolina, and NE to Nova Scotia.

A weakly minerotrophic, flat peatland that occurs inland from the coastal plain in which the substrate is peat composed primarily of peat mosses (Sphagnum spp.) with admixtures of graminoid or woody peat. The dominant plants are peat mosses (Sphagnum spp.), with scattered sedges, shrubs, and stunted trees. Poor fens are fed by waters that are weakly mineralized, and have low pH values, generally between 3.5 and 5.0. This community typically develops where water moves through the peat mat, thus it often forms linear patches closely associated with open water. Many of our "kettlehole bogs" are inland poor fens, according to this classification, since they are weakly minerotrophic. Poor fens often include hummocks that are essentially ombrotrophic islands within a weakly minerotrophic peatland.

Known examples of this community have been found at elevations between 319 feet and 2,094 feet.

Dwarf evergreen shrubs are important contributors to the flora of inland poor fens; their showy blooms are best seen in late spring and early summer. In early fall as the growing season ends, the peat mosses, evergreen shrubs, and tamarack form a warm tapestry of red, copper, and warm yellow tones. 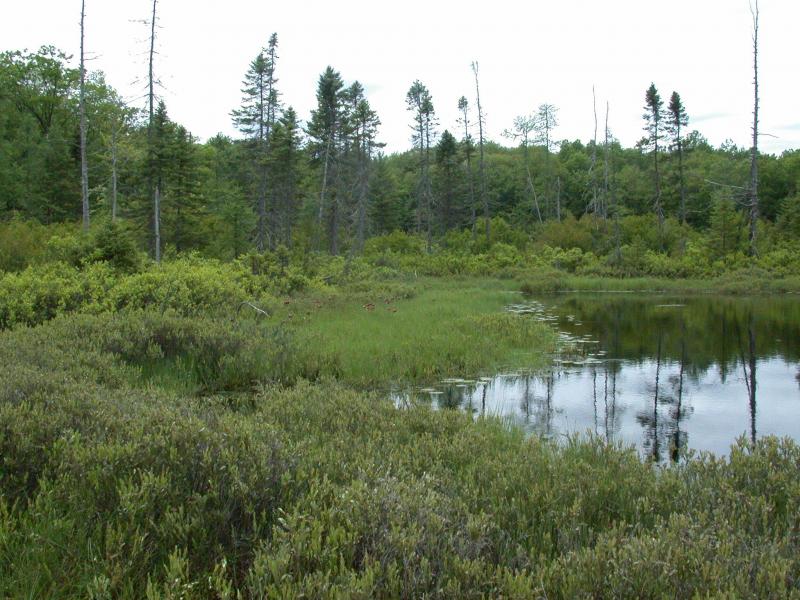 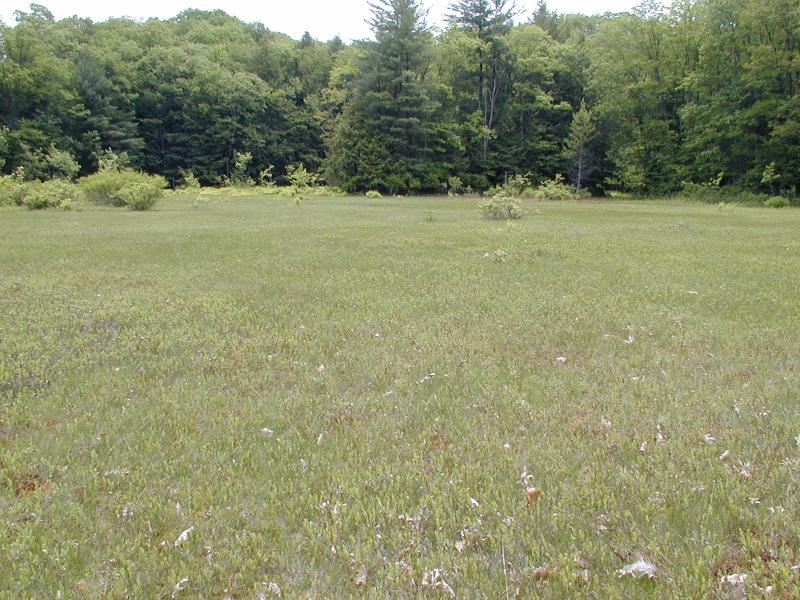 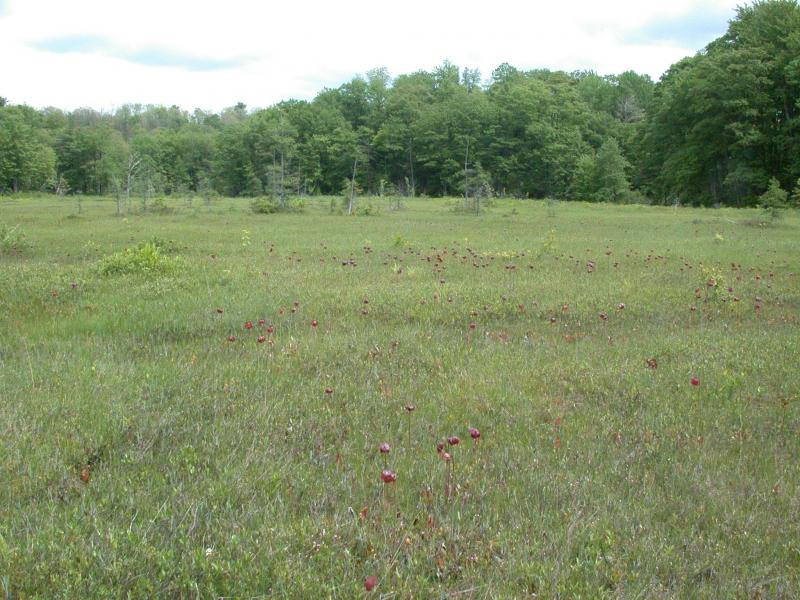 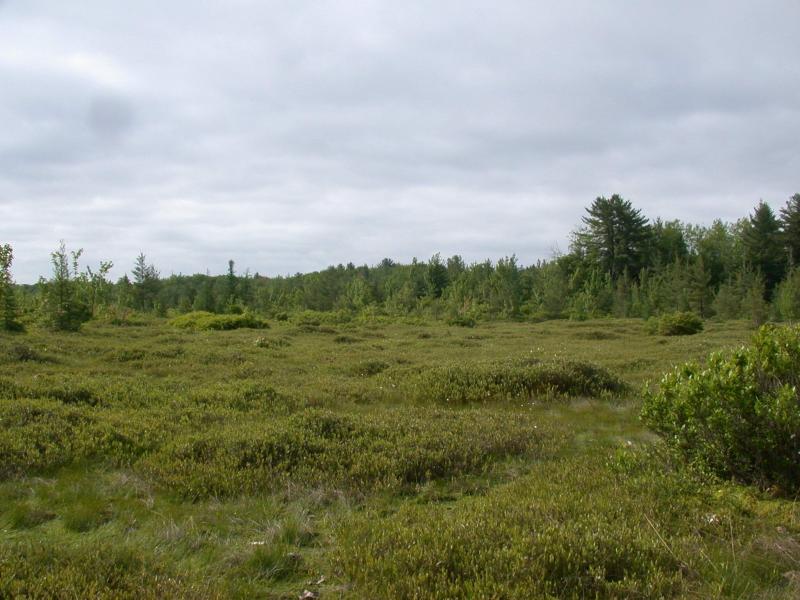 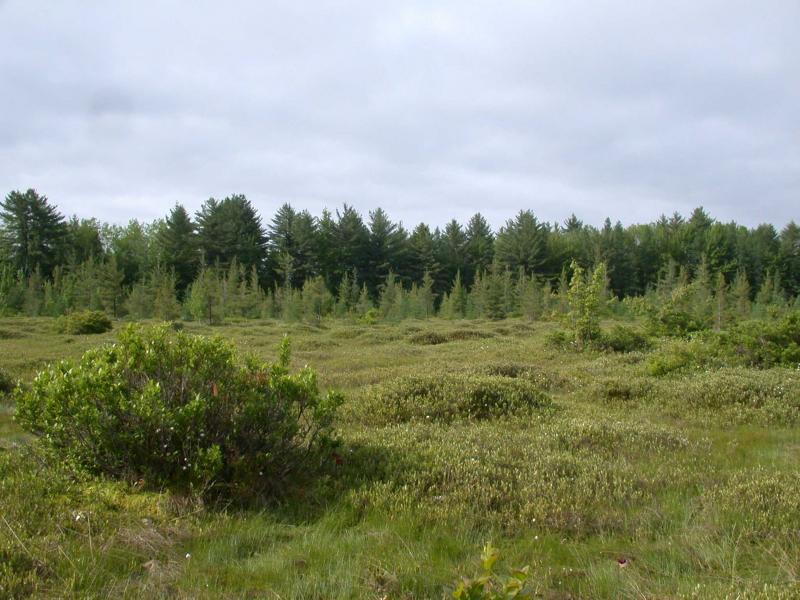 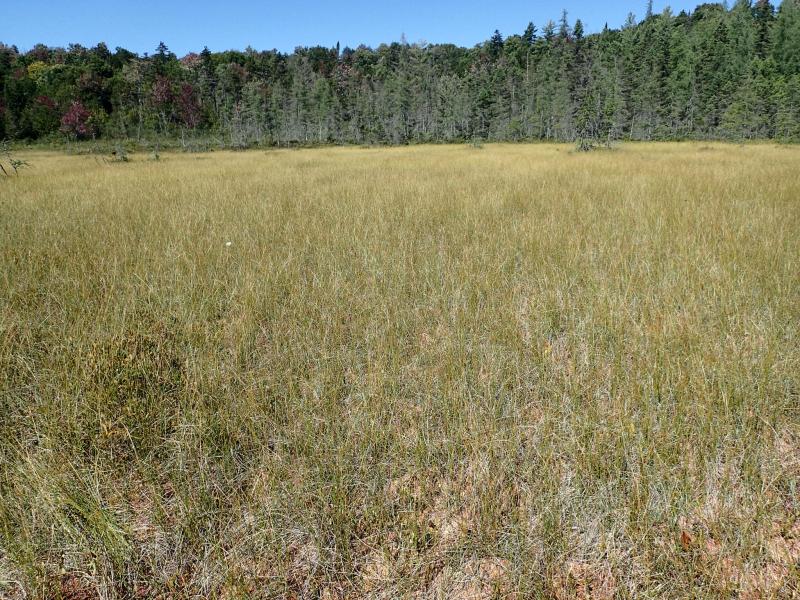 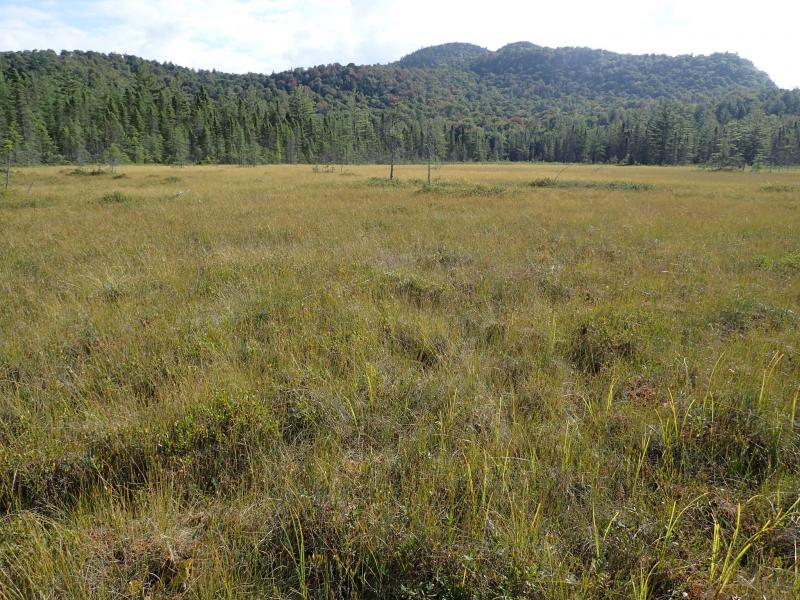 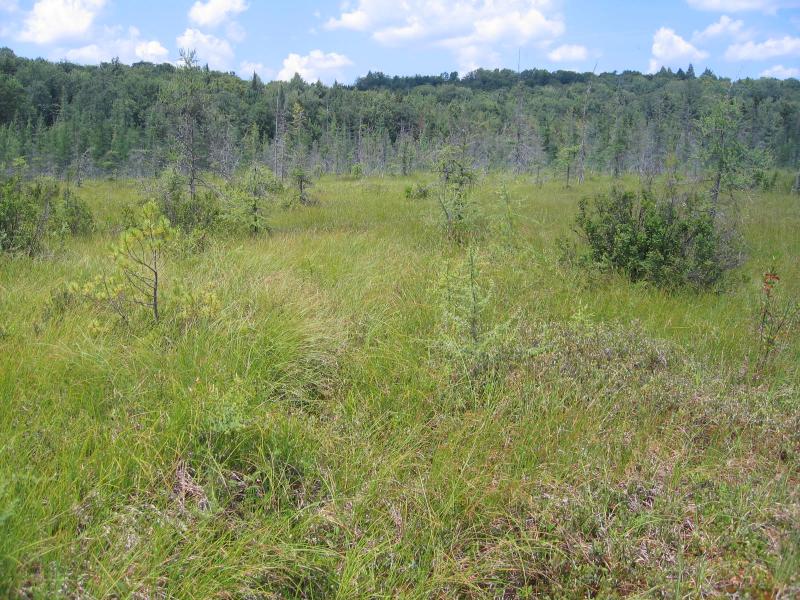 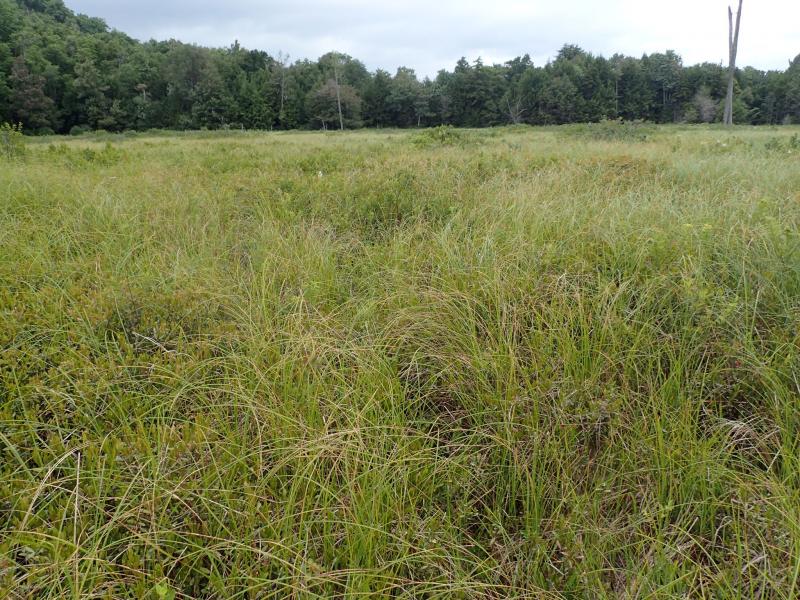 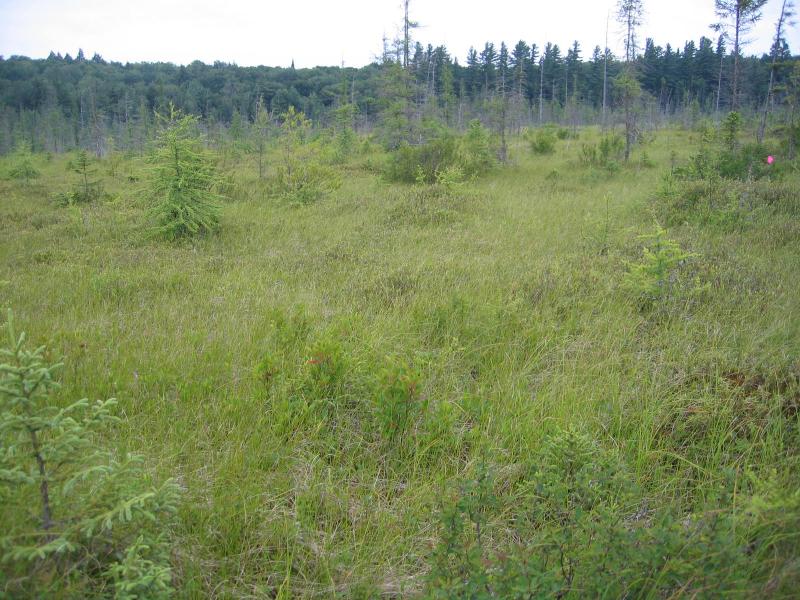 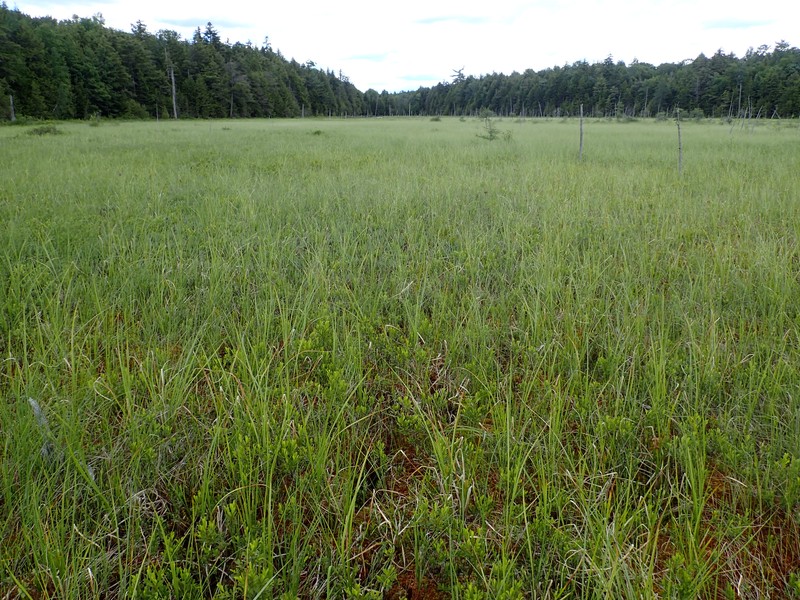 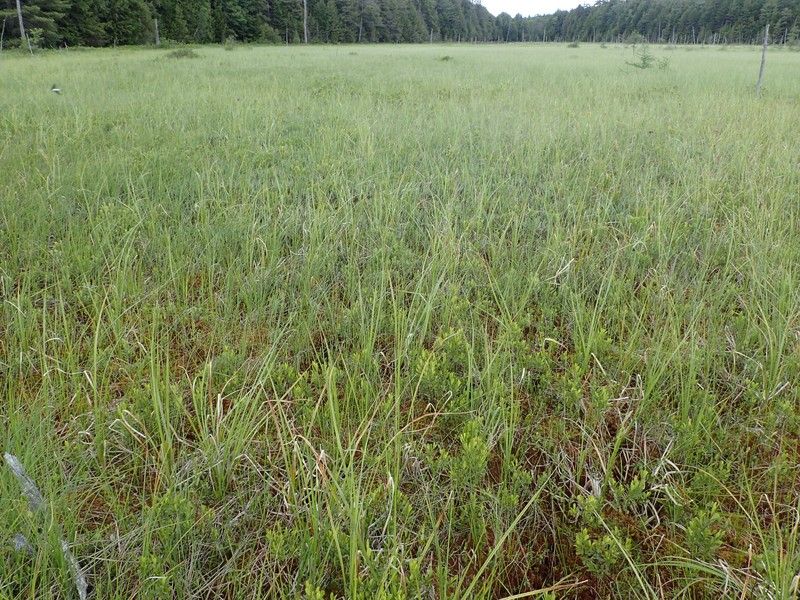 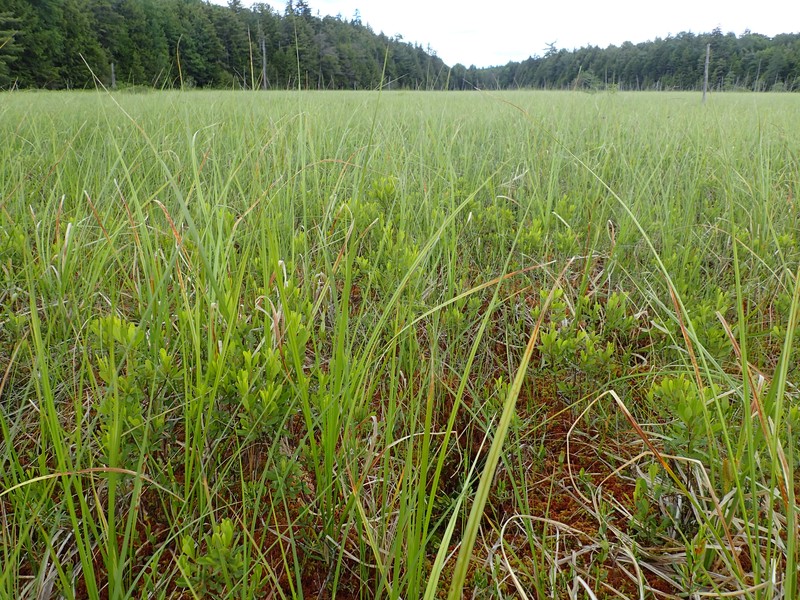 This figure helps visualize the structure and "look" or "feel" of a typical Inland Poor Fen. Each bar represents the amount of "coverage" for all the species growing at that height. Because layers overlap (shrubs may grow under trees, for example), the shaded regions can add up to more than 100%.