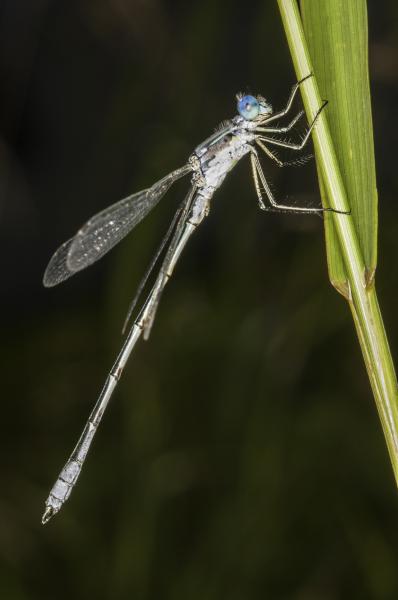 The Lyre-tipped Spreadwing is so named because the paraprocts (terminal appendages) on the tip of the abdomen on males are divergent and form a lyre (the stringed instrument) shape.

In New York, Lestes unguiculatus was known from 26 counties (Donnelly 1999) across New York prior to the beginning of the New York Dragonfly and Damselfly Survey (NYDDS, 2005-2009). It was documented in 9 locations within four counties in this region of the state during the NYDDS (White et al. 2010). The species appears to be sporadic or episodic in its occurrence in the state and presence can vary greatly from year to year across sites. But with this consideration, the species records over a five year period (2005-2009) compared with previous records appears to be declining.

In New York, Lestes unguiculatus was known from 26 counties statewide (Donnelly 2004) including northern, western, central, southern New York, and Long Island prior to the beginning of the New York Dragonfly and Damselfly Survey (NYDDS, 2005-2009). It was documented in 9 locations within four counties in the state during the NYDDS (White et al. 2010). Despite the increased survey effort during the NYDDS, county observations decreased which could be reflective of a population decline. The species appears to be sporadic or episodic in its occurrence in the state and presence can vary greatly from year to year across sites (Donnelly pers comm).

Any activity which might lead to water contamination or the alteration of natural hydrology could affect Lyre-tipped Spreadwing populations (NYS DEC 2005). Such threats may include roadway and agricultural run-off, industrial pollution, the building of dams, recreational boating, and development near their habitats (NYS DEC 2005). Groundwater withdrawal is a potential threat in lentic habitats, as are invasive plant species replacing native plants required for oviposition (New York Natural Heritage Program 2017). Both emergence rates and/or species ranges may shift for damselflies as a result of climate change in New York (Corser et al. 2015).

Further research is needed to define the distribution and population size of the Lyre-tipped Spreadwing. In addition, research is required to understand the habitat requirements and threats to this species, and to create appropriate management guidelines for its persistence in known locations (NYS DEC 2005). Monitoring for this species over time is needed to determine if they are truly in decline.

Lyre-tipped Spreadwings are known to inhabit small ponds and marshy wetlands, often in open, temporary situations that dry up in mid-summer (Lam 2004, Paulson 2011).

Lyre-tipped Spreadwings have been documented in 30 counties including northern, western, central and southern New York, plus Long Island. During a recent odonate atlas (White et al. 2010), their distribution was determined to include the four counties of Saratoga, Chenango, St. Lawrence, and Jefferson. The species appears to be sporadic or episodic in its occurrence in the state and presence can vary greatly from year to year across sites.

The global range for Lyre-tipped Spreadwings extends from British Columbia eastward through Canada to Nova Scotia and Newfoundland and southward into the United States covering most states except for the most southern below the line of California and Tennessee (Abbott 2006-2017). New York lies near the eastern edge of the overall range.

Lyre-tipped spreadwing males have a dark metallic thorax with pale (blue-green or tan) shoulder stripes; sides become pruinose pale blue to white with age. The abdomen is metallic dark green to brown above. The abdominal tip often becomes pale gray with age (segments 9 and 10), pruinosity leaving a dark triangle on the top of segment 8. Males may be separated from other similar Lestes by the shape of their terminal appendages, of which the paraprocts are divergent and lyre-shaped. Females have a green thorax above with pale (tan, blue-green, or yellow) sides and pale shoulder stripes. Their abdomens are metallic brown or green above and pale below and the rear of their heads are pale (Nikula et al. 2003, Lam 2004, Paulson 2011).

Lyre-tipped larvae feed on smaller aquatic invertebrates and adults feed on insects which they capture in flight.

Lyre-tipped spreadwing adults have been found in New York from June through September. Larvae may be found in appropriate habitats year-round.

The time of year you would expect to find Lyre-tipped Spreadwing present and reproducing in New York. 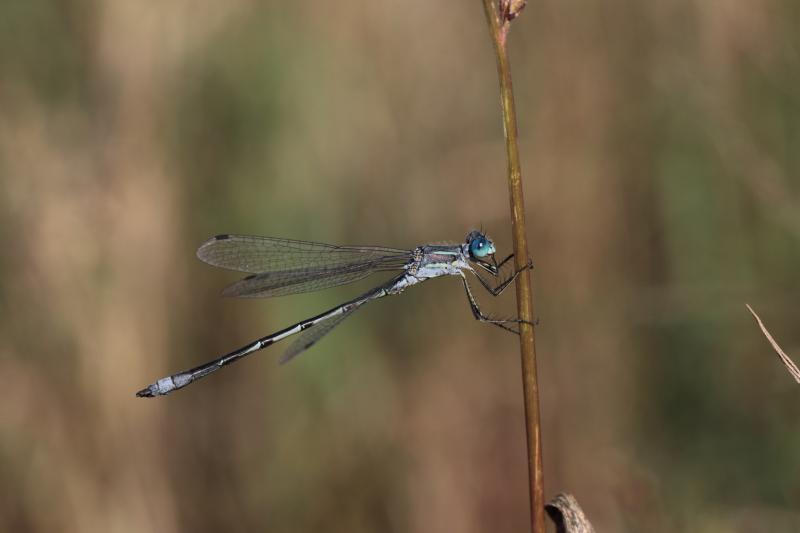 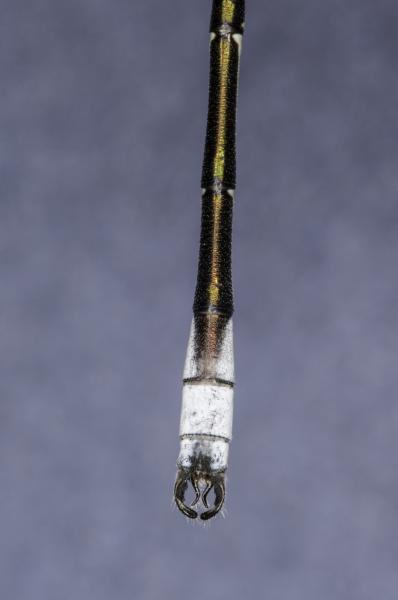 Information for this guide was last updated on: March 31, 2017