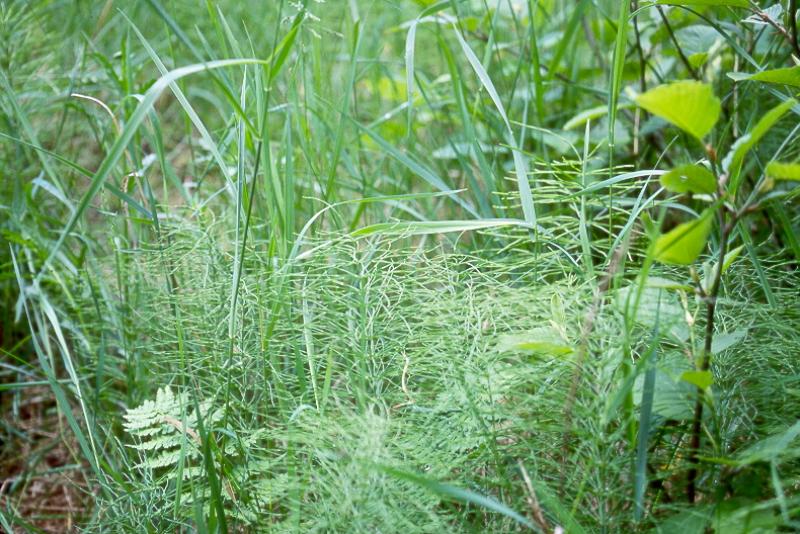 Species in the genus Equisetum are living members of a group of plants, the sphenophytes, that dominated the landscape during the age of dinosaurs. Some grew up to 100 feet tall but today's plants of the Equisetum family are much smaller, even though some species in South America may reach 15 feet in height.

There are 15 existing populations but only five of them are in good to excellent condition. The rest of the populations are 100 or fewer plants in small areas that are easily threatened. There are 10 additional historical occurrences and some of them still require surveys.

Most populations seem to be stable although many of them have not been resurveyed. One population was not rediscovered after an ice storm covered its habitat with downed trees.

Threats include trampling by people, erosion or high water in riverside habitats, logging and improper maintenance of roadsides including allowing succession to crowd out plants.

Plants need to be protected from direct impact by humans using their shoreline habitat. Roadside maintenance should avoid impacting plants by using proper mowing schedules and equipment. Open wetland habitats where these plants occur should not be allowed to succeed to shrubs or trees.

More research is needed to determine habitat preference since it is not known why these plants prefer certain areas of extensive wetland habitats this would help guide future surveys and modeling efforts.

In New York most records of Equisetum pratense are from three counties in the extreme northern portion of the state: St. Lawrence, Clinton, and Essex. It seems to be most common along the Ausable River. There is a single disjunct population known from the Catskill region, and a single historical record from Long Island.

Meadow horsetail occurs from Northern New England and Maritime Canada across the Great Lakes Region and Central Canada to British Columbia, The Yukon, and Alaska. It also occurs in Eurasia, including China and northern Japan.

All horsetails are perennial from rhizomes, have hollow stems with prominent nodes and whorled leaves, and produce spores rather than seeds. Meadow horsetail has annual above-ground stems, the fertile and sterile stems not alike, and it fruits in the spring. The sterile stems are 16 to 50 cm tall and 1-3mm thick, with a hollow center 16 to 1/3 the diameter of the stem, and the tips of the leaf sheaths separate except at the base. The upper half of the stem is covered with spicules (small projections of silica). The first branch internode is shorter than the stem leaves. The branches are mostly horizontal and delicate.

Equisetum pratense can be identified from vegetative or fruiting stems.

Equisetum arvense's fertile stem is not persistent and soon withers (not becoming green and branched). On vegetative stems the first branch internode is longer than the stem leaves, and the stems lack spicules. The branches of E. arvense are often ascending, and appear coarser than those of E. pratense.

Equisetum pratense produces spores in May and June.

The time of year you would expect to find Meadow Horsetail vegetative and fruiting in New York. 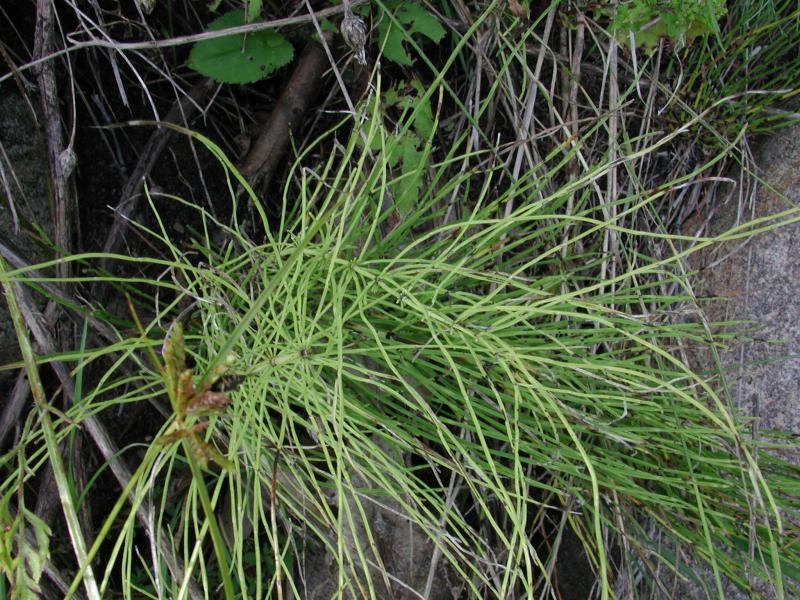