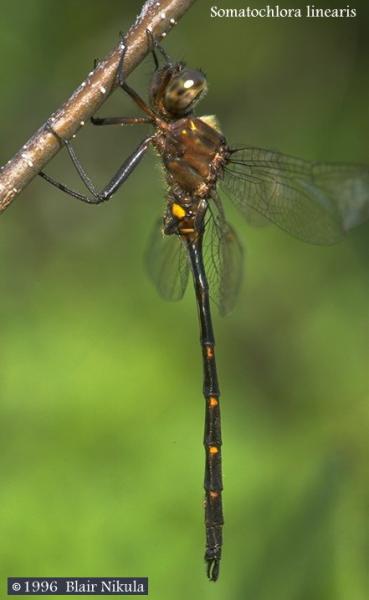 Most species of Striped Emeralds, dragonflies of the genus Somatochlora, have a metallic green wax coating their thorax (Dunkle 2000). The females of our species of interest, the Mocha Emerald, are slightly larger than the males (Natural Heritage Endangered Species Program 2003).

The Mocha Emerald is known to occur in eight counties in New York State, with no population estimates determined. Further survey efforts may result in the identification of additional populations or range expansions, and may enable population size estimations.

No estimate of population size for the Mocha Emerald has been made between the early-1990s to 2002 (New York Natural Heritage Program 2007). Information prior to this time frame is even more limited. New location information on the Mocha Emerald in New York may reflect heightened interest in surveying for this species rather than a population increase or a range expansion (Holst 2005).

While recent observations of Mocha Emeralds have been made from the early-1990s to 2002 in Westchester, Rockland, and Orange counties, they are known to occur in Cattaraugus, Dutchess, Erie, Oswego, and Tompkins counties, as well as New York City based on earlier observations (Donnelly 2004, New York Natural Heritage Program 2007). Since the full extent and size of the populations have not been determined, long-term trends are unclear.

Any activity that might lead to water contamination or the alteration of natural hydrology could impact Mocha Emeralds and other stream dwelling odonates (Holst 2005). Such threats might include chemical contamination from agricultural run-off, changes in dissolved oxygen content, flow alteration, increases in sediment load, development near their habitats, and the building of dams (Natural Heritage Endangered Species Program 2003, Holst 2005).

Any measures to reduce water contamination or hydrological alteration such as agricultural run-off, upland development, and damming that would affect flow of small forested streams should be considered when managing for this species (Holst 2005).

Further research is needed to define the distribution and population size of the Mocha Emerald. In addition, research is required to understand the habitat requirements and threats to this species, and to create appropriate management guidelines for its persistence in known locations (Holst 2005).

Mocha Emeralds inhabit small, shaded streams in forested areas that are about 1-3 yards wide with sand, gravel, or rocky substrates (Dunkle 2000, Nikula et al. 2003, Holst 2005). Larvae are aquatic and found in the water during this lifestage, whereas adults are terrestrial and are found in habitats surrounding forested streams.

The Mocha Emerald is confirmed in locations from eight counties in the eastern, central, and western parts of the state (Donnelly 2004, New York Natural Heritage Program 2007).

Adult members of the family Corduliidae, or emeralds, have emerald green jewel-like eyes which come together to form a seam on top of their heads. Mocha Emeralds are large (2.3-2.6 inches), slender, and elegant dragonflies with black legs, a chocolate or mocha-colored thorax that has a greenish iridescence, and sometimes brown-tinted wings. They have a black abdomen with a whitish-yellow lateral (side) spot on abdominal segment 2 and pale orange-brown lateral (side) spots at the proximal ends (closest to the thorax) of segments 3-8. Male terminal appendages and female subgenital plates are distinctive among Somatochlora species when examined under magnification. Females (2.6-2.7 inches) are larger than males (2.3-2.4 inches), and their ovipositors are thorn-shaped and perpendicular from their abdomen. They are usually distinguished from other species of emeralds by their large size, elegant shape, brown-tinted wings, lack of markings on their thorax, and forested stream habitat.

Adult Mocha Emeralds hunt and feed in nearby fields or forest undergrowth, sometimes hunting in pairs. Flight behavior can be rapid with up-and-down and side-to-side undulations or slower with gliding movements. Males patrol up to 20-30 yards of stream looking for females (Dunkle 2000). Females oviposit (lay eggs) alone after mating by tapping the tip of their abdomen directly into wet mud or shallow water at the edges of the stream (Natural Heritage Endangered Species Program 2003, Nikula et al. 2003).

Mocha Emerald larvae feed on smaller aquatic invertebrates and adults feed on insects which they capture in flight.

Somatochlora linearis are active from late June through early September in the northeast (Nikula et al. 2003). They are most active in early morning, beginning at dawn, and in the late afternoon to dusk (Dunkle 2000). Larvae may be found in appropriate habitats year-round.

The time of year you would expect to find Mocha Emerald present and reproducing in New York.

Information for this guide was last updated on: April 16, 2007