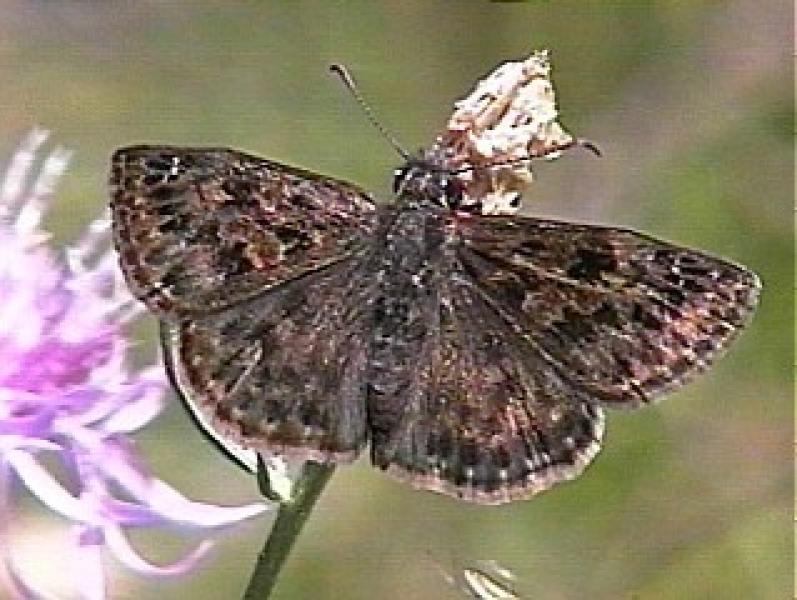 This skipper is thought to be extirpated from most of its range east of the Mississippi River, with a few colonies remaining in New York, Canada, and probably in the southern Appalachians and Great Lakes region. The main foodplant of the larva was once so common that it was commercially important as New Jersey Tea, especially around the time of the American Revolution. Now the plant is so reduced that this skipper and two moths whose larvae feed on the leaves are probably gone from that state and much of the east. The Albany Pine Bush is probably the only place in the Northeast where all three still occur. Excessive browsing by deer and loss of brushy and barrens habitats are among the factors in this decline. The recent well-known populations on the southeastern Pennsylvania serpentine barrens apparently disappeared in the early or mid 1990s following a few years of heavy browsing of the foodplant by deer. The deer herd was reduced, the plants recovered, but with no known populations remaining closer than the Albany, New York Pine Bush; the Mottled Duskywing is not expected to return there.

This skipper still occurs in the Albany Pine Bush and two additional preserves. However, it is unlikely that any sites are actually protected from deer. The foodplants are now known to be exclusively Ceanothus spp., which are favored by deer and deer have apparently caused the extirpation of colonies of this skipper in other states. This skipper has declined dramatically in Ohio and Canada and probably no longer occurs in any other states near New York, from New Hampshire through at least eastern Pennsylvania.

The current status and population size at many sites needs to be assessed. This species is apparently declining in the Albany Pine Bush, probably due to deer browsing.

The extent of decline is a bit uncertain because the validity of some of the older records is uncertain. If, as seems likely, those in Shapiro (1974) are correct, the decline has been about 95% in the last 50 to100 years which would be less than in most eastern states. Most New York records are historical.

This butterfly's foodplant, New Jersey Tea (Ceanothus americanus), is a favored food by deer. Deer are known to have eliminated populations of this species in other states (e.g., Pennsylvania) and they could be a major factor in the collapse of this skipper in the east, although there have been others such as successional changes. Impacts from deer would be by far the most likely explanation for any decline in the Albany area.

Research needs include determining the population (metapopulation) dynamics. Systematic gathering of data on this species is necessary.

Former habitat types in New York likely included a variety of dry brushy or scrubby areas or relatively open woodlands with abundant New Jersey Tea (Ceanothus americanus), although as with any species of the genus Erynnis, the possibility of some records being misidentifications should be considered. The current and recently extirpated locations for this species in the Northeast and mid-Atlantic region are mostly inland Pitch Pine (Pinus rigida) barrens. One current New York occurrence is in an alvar grassland. In Ontario, oak savannas and oak woodlands can provide suitable habitat for this species, and it is likely that this was an historical habitat type in New York. The persistence of this species probably requires the foodplant to occur in substantial patches over an area of at least a few hundred acres or containing a cluster of smaller habitats.

Despite the presence of the foodplant, New Jersey Tea (Ceanothus americanus), in the southern part of New York and elsewhere, this skipper is largely absent from all stands of the foodplant east of Ohio. There are records, mostly historical, from Long Island, Albany, Rockland County, Westchester County, throughout the Hudson Valley, central and western New York, as well as a few scattered sites in the more northern part of the state. It is difficult to know if all of these records were correctly identified, however. More importantly, considering the lack of recent records and the collapse of this species in all neighboring regions, this does not reflect a current range. Glassberg (1993) reports it was already historical with no records in 30 years for the New York City area. It is now historical or extirpated from all four areas covered by that book, and is no longer known extant anywhere in New England, New Jersey, or Pennsylvania. According to Robert Dirig (as of July 2007), the Mottled Duskywing still occurs in the Albany Pine Bush and vicinity, but is much less common than in the past. There also have been credible reports of this species from the Clintonville barrens in 2001 and 2004, and one was photographed on an alvar in Jefferson County in 2004. These three counties in New York comprise the majority or all of the current distribution in the entire Northeast, from Maine to Maryland.

The historic range is approximately that depicted by Brock and Kaufman (2003). It extended from Massachusetts, Connecticut, and New Hampshire, west across New York and southern Ontario and the Great Lakes states to Minnesota and western Iowa, then south to the Gulf states, and central Texas (Opler and Krizek 1984), west to eastern Nebraska, eastern Kansas, the Ozarks, with disjunct isolated populations in the eastern foothills of the Rocky Mountains in central Colorado, and in the Black Hills (Stanford 1981, Stanford and Opler 1993, Opler 1994, Opler and Krizek 1984). The current range is drastically less than what was once present. The species is now apparently extirpated from New England, New Jersey, at least the eastern half (and possibly all) of Pennsylvania and most of Maryland, and it is very rare in West Virginia and Ohio. However, since 2001 it is still extant in at least three counties in New York. It seems unjustified to consider anything east of Ohio, including Canada, in any range extent estimation since such populations are mostly small, isolated, remnant colonies on a few hundred hectares or less of habitat and, in most cases, destined for extirpation.

This species has been commonly misidentified in the past in other states. However, this is less of a problem in New York because females of the Horace's Duskywing (Erynnis horatius), a similar species, appear to be the main source of confusion and this species is not widespread in New York.

A small, very bright, and contrasting duskywing. The purplish sheen is diagnostic when obvious. Note the narrow sharply delineated hindwing band. The size can be unreliable because small females of Horace's Duskywing (Erynnis horatius) are very similar. This species can be tentatively identified from Brock and Kaufman (2003) or Glassberg (1993, 1999), but it should be verified by an expert based on a specimen or several diagnostic images. Some images may leave room for doubt, however.

The larval stage is perhaps the easiest to identify. Any larva that can be determined to be a skipper and is found living in a folded leaf of and eating the same plant, Ceanothus spp., will be this species. However, it will usually be found in the adult stage.

The larval foodplants are species of Ceanothus, primarily New Jersey Tea (Ceanothus americanus), but Prairie Redroot (Ceanothus herbaceus) is the foodplant in Clinton County. The adults sip moist soil and take nectar from a variety of flowers, perhaps most often those of Ceanothus spp. when flowering coincides with the second brood.

Shapiro (1974) thought there to be one brood (generation) from mid-June to 21 August in the Ithaca area. However, this length of time is long enough to represent two broods and there have been two broods documented in all adjacent states and in Ontario, with the dates of these broods occurring about mid-May and June and late July to mid-August in most localities. The Clinton County records are in early to mid-June and the Jefferson County record is from 13 May. Each brood probably occurs over a period of less than a month during most years, and the Mottled Duskywing is not likely to be found reliably in late June or early July, despite a few records during this period of time. The two broods overlap the Karner Blue (Plebejus melissa samuelis), but the first brood starts earlier, occasionally even in late April. The Mottled Duskywing is probably most reliably found from mid to late May and the last two weeks of July.

The time of year you would expect to find Mottled Duskywing reproducing and larvae present and active in New York. 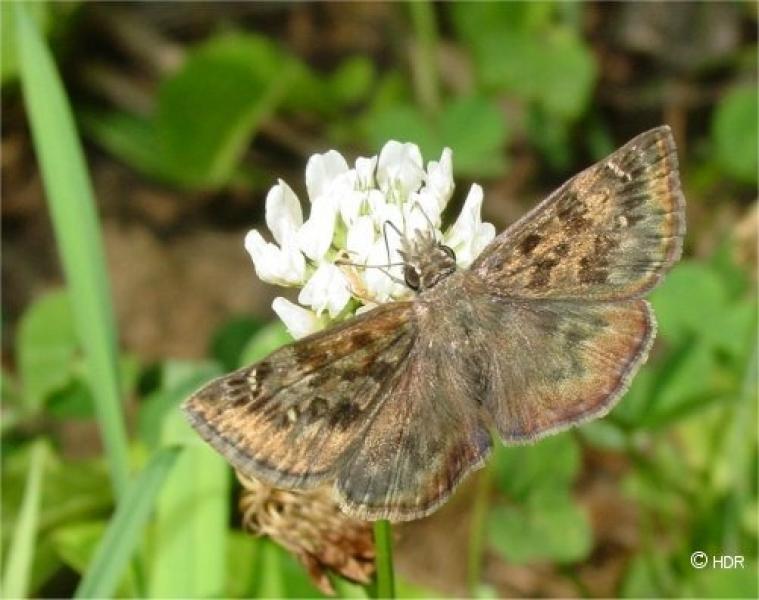 This guide was authored by: Dale Schweitzer

Information for this guide was last updated on: May 24, 2021