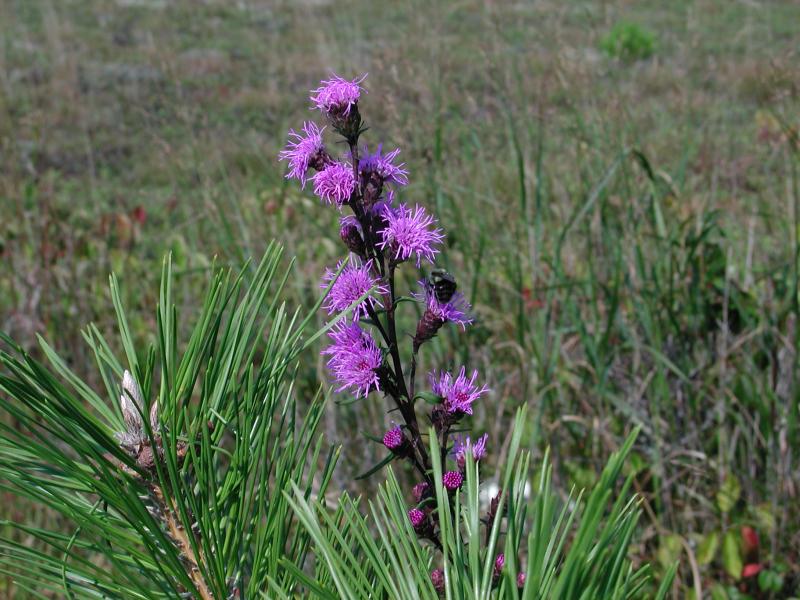 The number and range of this plant has been greatly reduced on Long Island as development has reduced its open upland habitat. An interesting naming problem occurred with this variety as the name Liatris scariosa var. novae-angliae (meaning New England) was being used in botany manuals without first being formally published. This was corrected in 2003 with a formal recognition of the name. The origin of the name Liatris is unknown.

There are 19 existing populations but only four of these are in good condition. The rest are usually less than 100 plants each in small grassland or roadside habitats. There are approximately 30 historical occurrences but about 10 of these have been extirpated in Western Long Island and Westchester County.

The short-term trend seems stable although a few populations were extirpated by habitat alteration in recent years.

The long-term trend has been declining over the last 100 years as grassland habitats have become more fragmented by human development. There are only a few populations that remain in fairly large grasslands as others have held on in smaller grassland fragments or along roadsides. The 10 or so historical occurrences from Western Long Island, New York city and Westchester County are considered extirpated.

These plants may be lost to succession if the grassland communities are not maintained, preferrably by fire management. Roadside populations are threatened by improper mowing schedules which remove plants before they can disperse seed or by maintenance which can destroy plants. Some plants are threatened by house construction or by picking for flower arrangements. More study needs to be done to see if plants are being over-browsed by deer. Without periodic fires moth larvae eat the seeds of Liatris and reduce reproduction (Vickery 2002, Kane 2001).

Grassland habitats need to be kept open by mowing, grazing, or preferrably by prescribed fires which increase seed production for (Vickery 2002, Kane 2001). Mowing schedules should avoid direct damage to plants. High dispersal populations can be targeted for management efforts to promote regeneration (Gravuer 2003).

More research is needed into maintenance techniques that will preserve and augment populations. Deer browse studies are needed to determine their effect (Kane 2001).

In New York Northern Blazing-star has been found only on Long island and in Dutchess County in the Hudson Valley.

Liatris scariosa var. novae-angliae is found in each of the New England states as well as New York, New Jersey, and Pennsylvania.

Northern Blazing-star is a perennial herb of the Aster family, growing up to 1.2 m tall. Its leaves are long (11 to 27 cm), narrow (.5 to 2.5 cm), and glabrous or minutely hairy. There are 5 to 30 flowering heads of disc flowers only, each on a peduncle 1-5 cm long. The flowers (35-60 per head) are a bright (blazing) pink, and tube-shaped, lending the heads a distinctive "shaggy" appearance.

L. scariosa var. angliae and L. cylindracea are the only Liatris species native in New York, and the only ones with the flowering heads on pedicels as long as the involucres. Liatris cylindracea differs from Liatris scariosa var. novae-angliae by its linear leaves (normally no more than 6 mm wide), and glabrous stem, and is a Midwestern species known in New York only from Niagara County.

Northern Blazing-star flowers and fruits in late summer, and may persist until frost.

The time of year you would expect to find Northern Blazing Star flowering and fruiting in New York. 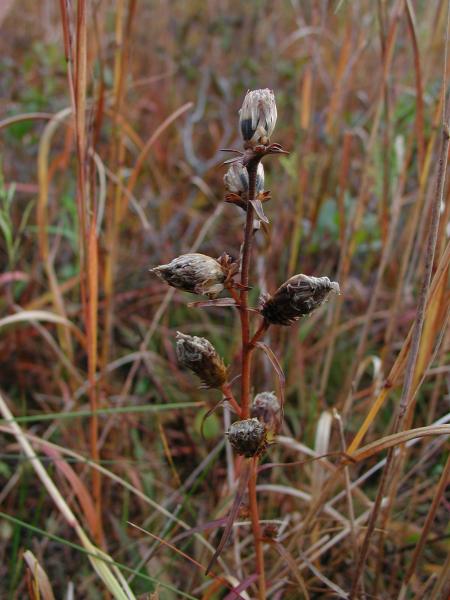 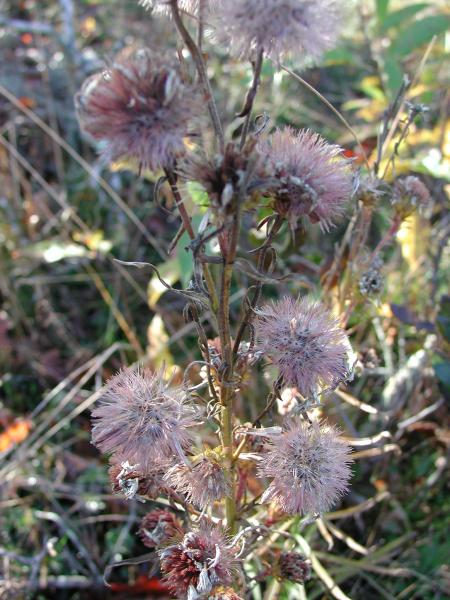 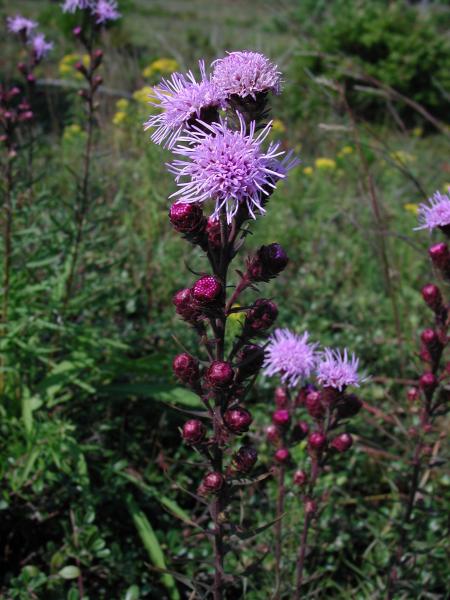 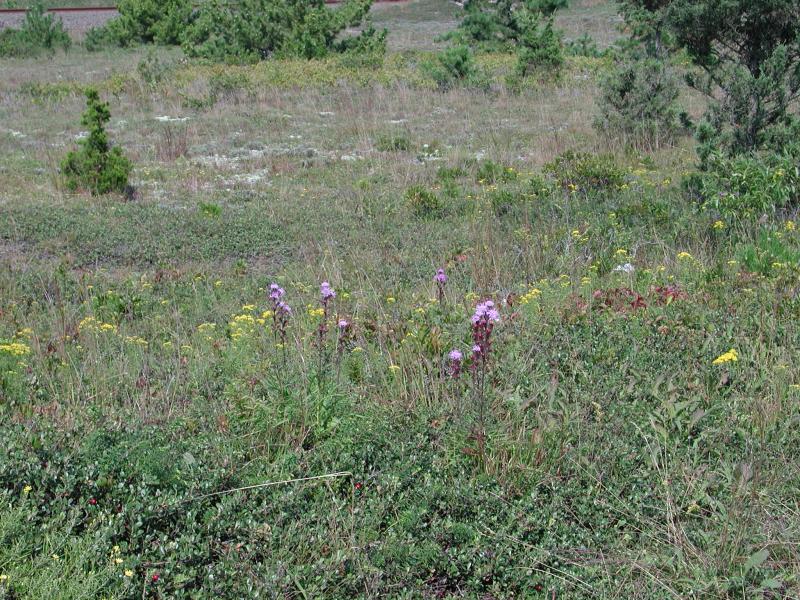 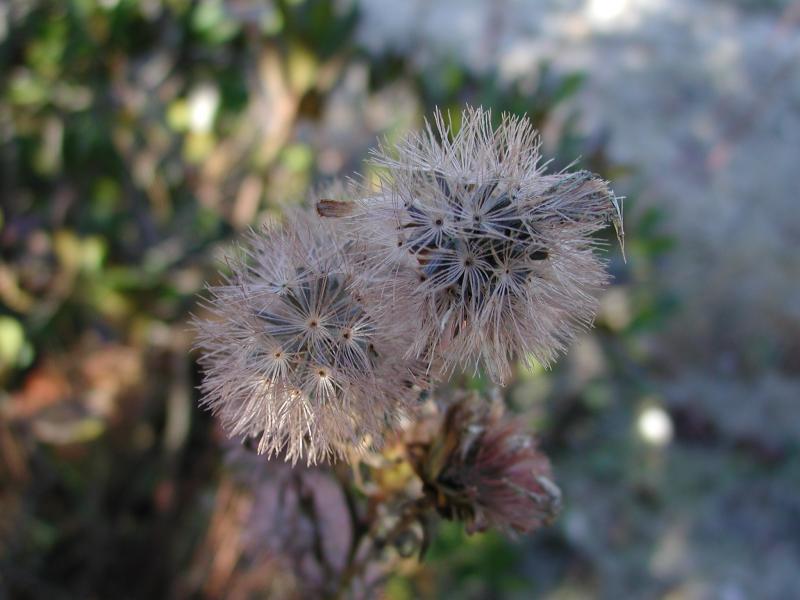 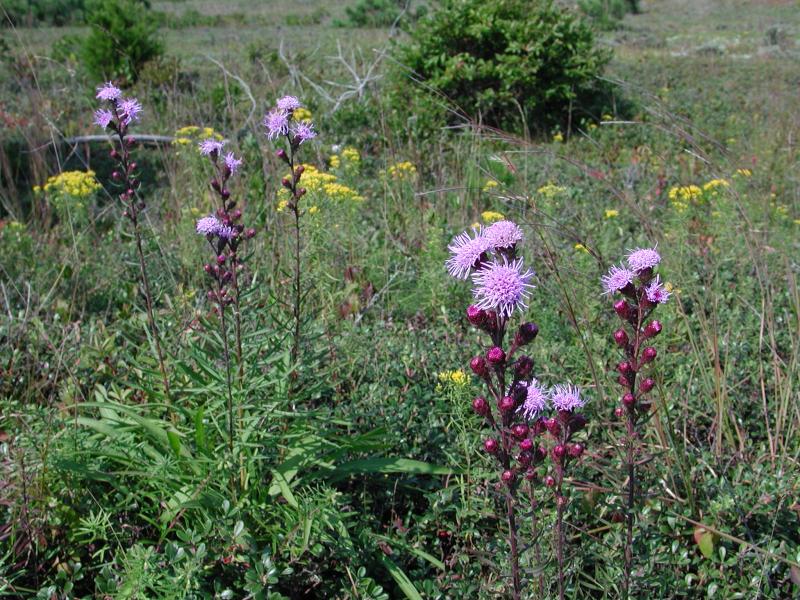