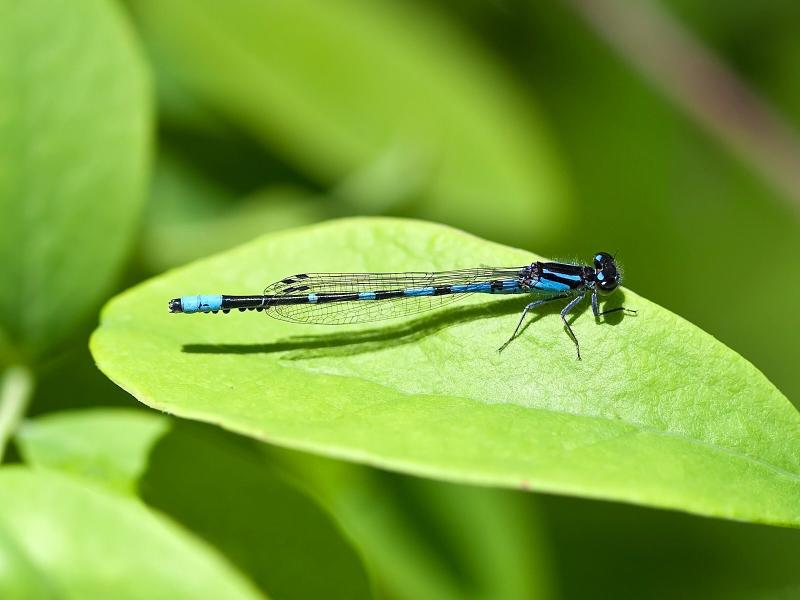 While slender and small in appearance, male Pine Barrens Bluets can be quite aggressive in behavior with other male bluets during breeding season and have been observed to attack these other individuals (Carpenter 1991).

In New York, Pine Barrens Bluets have been confirmed in thirteen coastal plain ponds in Suffolk County (New York Natural Heritage Program 2011). In addition to a restricted range, there are a number of threats to these locations (see Conservation and Management section). New locations in recent years are likely due to increased survey effort rather than a population increase or expansion.

Population estimates have been made in recent years as part of a special effort during the New York Dragonfly and Damselfly Survey (2005-2010) (White et al. 2010). Of the thirteen sites where Pine Barrens Bluets are known to currently occur, four sites are estimated to have excellent viability. Some sites are in close proximity to each other, and the thirteen sites may be grouped into at least four pond complexes. In two of the complexes, between 100-999 individuals were estimated in at least four of the ponds since 2005. Recent information on the species prior to 2005 is very limited, with records going back to 1988 or 1990 at a few sites (New York Natural Heritage Program 2011). New locations in recent years are likely due to increased survey effort rather than a population increase or expansion and may serve as baseline information to look at future trends.

Recent observations since 1988 have been noted at Suffolk County sites and the species had been observed at three additional historical locations, one of which dates back to 1910 (New York Natural Heritage Program 2011). Observations are fairly recent and long-term trends are unclear.

Any activity which might lead to water contamination or the alteration of natural hydrology could impact Pine Barrens Bluet populations (NYS DEC 2005). Such threats might include roadway and agricultural run-off, ditching and filling, eutrophication and nutrient loading from fertilizers, herbicides, and septic systems, changes in dissolved oxygen content, and development near their habitats (NYS DEC 2005). Groundwater withdrawal is a potential threat in lentic habitats on Long Island, as are invasive plant species replacing native plants like white water lily that Pine Barrens Bluet requires for oviposition (New York Natural Heritage Program 2011). The introduction of grass carp is also a threat to coastal plain ponds on Long Island. A potential threat to the bluets may be the impact of Canada Goose (Branta canadensis) browse on native vegetation (New York Natural Heritage Program 2011). In addition, both emergence rates and/or species ranges may shift for odonate species as a result of climate change (Kalkman et al. 2008).

Any efforts to reduce roadway and agricultural run-off, eutrophication, development of upland borders to ponds and resulting increased groundwater withdrawal, invasive plant and animal species, trampling of vegetation from recreation, and ditching and filling activities should be considered when managing for this species (NYS DEC 2005, White et al. 2010). Maintenance or restoration of native shoreline vegetation and surrounding upland habitat will benefit this species, as females require native emergent vegetation for successful reproduction and spend much of their time in upland habitats away from the breeding pond (Gibbons et al. 2002, White et al. 2010). Many of the known sites on Long Island are located within or on preserves or protected lands, but the above listed threats might be present on adjacent lands.

Further monitoring is needed to define the extent of populations of Pine Barrens Bluets in New York. In addition, research is required to understand the habitat requirements and threats to this species. In particular, the impact of Canada Goose at some of the locations in Suffolk county should be assessed to determine if bird browse decreases oviposition sites or increases egg mortality by overgrazing native rushes used by Pine Barrens Bluets (White et al. 2010). A recovery plan for the species should be developed and appropriate management guidelines should be adopted for its persistence in known locations (NYS DEC 2005).

Pine Barrens Bluets are known primarily to inhabit acidic, coastal plain ponds with sandy substrate (Nikula et al. 2003, Lam 2004) and emergent vegetation such as Bayonet Rush (Juncus militarus) along the shoreline (Massachusetts NHESP 2008) where females oviposit (Carpenter 1991). In New York, this is the case as well, and some sites also have a floating bog mat or the pond has a boggy edge (New York Natural Heritage Program 2011). In New Jersey, they are found in bogs within pine barrens (Bangma & Barlow 2010).

In New York, there are 13 known locations in Suffolk County where the species occurs in four pond complexes (New York Natural Heritage Program 2011).

The male Enallagma recurvatum has a blue thorax with black mid-dorsal and shoulder stripes and tear-shaped, blue spots behind the eyes (Nikula et al. 2003). The abdomen is blue with black markings; the amount of black increases incrementally from abdominal segment 3 through 7 (Lam 2004). There is usually a small, black, horizontal mark laterally on abdominal segment 8. The female has a similar thorax, with pale areas that are tan or blue-gray and the abdomen is mostly black above, with either a blue or green unique mark dorsally at the base of abdominal segment 8 (Nikula et al. 2003, Lam 2004).

In New York, both pre- and during NYDDS, records for adults have been documented between May 4 and July 6 (Donnelly 1999) with most coming from the first half of June (New York Natural Heritage Program 2011). In Maine, specimens have also been taken in mid to late June (Brunelle & deMaynadier 2005). Adults are known to fly in New Jersey from May 8 through June 27 (Bangma & Barlow 2010) and in Massachusetts from late May through early July (Lam 2004). This species has a short and early flight season throughout its range (Carpenter 1991).

The time of year you would expect to find Pine Barrens Bluet present and reproducing in New York.

Information for this guide was last updated on: June 7, 2011