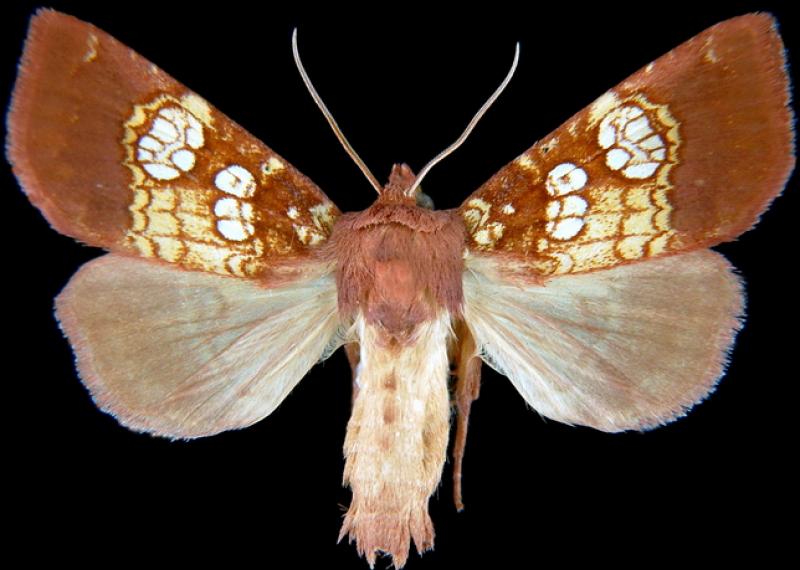 Larvae of borer moths in the genus Papaipema, such as the pitcher plant borer moth, can tunnel more than a foot into their host plant (Wagner et al. 2008).

Two populations of the pitcher plant borer moth are documented, one in a fen in Oswego County and one in a fen in Suffolk County. Each was documented in the late 1980s-early 1990s and has not been surveyed since. The habitat for this species is patchily distributed; the moth occurs only in wetlands such as bogs and fens that contain pitcher plants (Sarracenia spp.). Additional surveys are needed to better understand the status and distribution of this moth in New York State.

The short-term trend for the pitcher plant borer moth in New York State is unknown. The two documented populations were each surveyed once in the late 1980s-early 1990s and not since. One individual was captured at each site.

The long-term trend for the pitcher plant borer moth in New York State is unknown.

Altered hydrology in occupied wetlands could destroy pitcher plants (Sarracenia spp.), the larval foodplants. Any insecticide spraying in occupied wetlands during the pitcher plant borer moth's flight season, late August-September (Covell 1984; Wagner et al. 2008), might be a threat. It appears that moths in the genus Papaipema are only able to tolerate small environmental changes (Wagner et al. 2008). Changes in environmental conditions due to climate change might be an additional threat.

Occupied wetlands should be evaluated to minimize encroachment and fragmentation by development, since surrounding natural areas serve as buffers that reduce the impact of sediments, nutrients, and pollutants in runoff entering wetlands. In addition, in occupied areas, the following practices would be beneficial: 1) maintaining the natural hydrology, 2) restricting insecticide spraying, particularly during the pitcher plant borer moth's flight season (late August-September, Covell 1984; Wagner et al. 2008), and 3) conducting forestry practices in the vicinity of occupied wetlands in a way that minimizes negative impacts to occupied wetlands.

The pitcher plant borer moth occurs only in wetlands such as bogs and fens that contain pitcher plants (Sarracenia spp.), the larval foodplants (Covell 1984).

The pitcher plant borer moth is documented from Oswego, Suffolk, and Chenango counties.

The pitcher plant borer moth is distributed in eastern North America from coastal areas from Nova Scotia to Florida, inland through the Great Lakes region to Wisconsin (Covell 1984).

The pitcher plant borer moth is mostly reddish brown, straw yellow, and white. The top of the head and thorax is reddish brown, as is the base and outer third of the forewing. The rear half of the center of the forewing is straw yellow and marked with reddish-brown lines. The orbicular and reniform spots are very large and white and are also marked with fine reddish-brown lines. The hind wing has a pale yellow tinge with a light sprinkling of reddish-brown scales toward the outer margin (Covell 1984; Brou 2005). The wingspan is approximately 30-41 mm (Covell 1984). Frass of larvae is orange (Hessel 1954; Wagner et al. 2008). The early instars (stages) of many larvae in the genus Papaipema are colorful, with rings or whitish stripes on a maroon, pink, purple, or brown body. Later instars become whiter (Wagner et al. 2008). The species is most easily identified as an adult moth (Wagner et al. 2008; NatureServe 2010), and its identification should be confirmed by an expert if based on a photograph or sign other than an adult specimen (NatureServe 2010).

The adult is the best life stage for identification (Wagner et al. 2008; NatureServe 2010).

The best time to see the pitcher plant borer moth is during its flight season. In the Northeast, the moths generally fly from late August-September and sometimes into October (Covell 1984; Wagner et al. 2008). In New York State, the moth has been documented to fly in mid-September.

The time of year you would expect to find Pitcher Plant Borer Moth present and reproducing in New York.

Hessel, Sidney, A. 1954. A guide to collecting the plant-boring larvae of the genus Papaipema (Noctuidae). Lepid. News. 8: pp. 57-63. Note a corrected version is included as Appendix D of the Lepidopterists' Society's basic techniques manual (Winter, 2000).