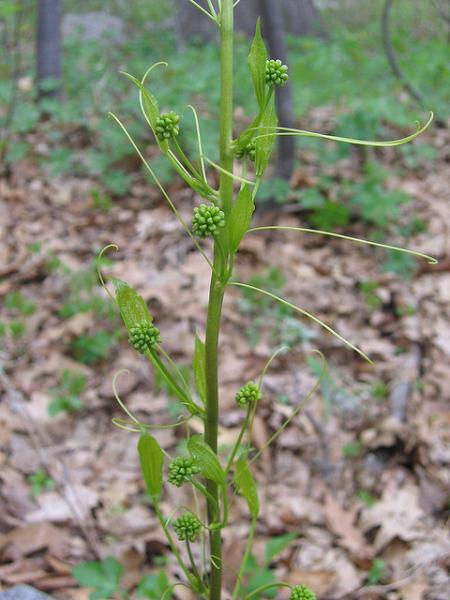 The species name is Latin for powdery and refers to the small hairs on the veins beneath leaves (Fernald 1950).

There are three existing populations but all of them have under 100 plants each. One population from 1916 was rediscovered in the 1990s and one other population from the 1870s needs to be resurveyed. 2 populations known from 1893 and 1919 respectively, no longer exist because their habitat has been destroyed.

The short-term trend of existing populations seems to be stable.

The long-term trend is somewhat negative. This plant has always been very rare in New York and there have been just a few populations documented since the late 1800s. Numbers will continue at low levels for the foreseeable future.

Overuse of natural areas from nearby residential developments may threaten these plants.

Natural buffers need to be established around populations in order to prevent direct disturbance.

Some herbarium work is needed to make sure that proper identifications were made to distinguish specimens from the closely related and common Smilax herbacea. More research is needed to determine its habitat preference to better target areas for survey as populations occur in seemingly common habitat.

In New York, two populations occur along the banks of a stream at the base of a slope; one in a shrub tangle of a mesic woods dominated by maples and the other in a rich oak-tulip tree deciduous woods. A third population is in a heavily disturbed successional oak-hickory forest near a playground area, small wetland, and public golf course (New York Natural Heritage Program 2012). Moist soil of open woods, roadsides, and tickets (Gleason and Cronquist 1991). Rich woods, thickets, usually in calcareous soils (FNA 2002).

This vine is currently known from Staten Island and in the Bronx. Historical records are also known from Manhattan and Westchester County where it is considered extirpated.

It ranges through the middle part of the eastern United States extending from New York south to Georgia in the East and from Illinois through Missouri and Arkansas to northern Mississippi in the West. There are scattered locations in eastern Kansas just over the border from Missouri and in Nebraska and Minnesota.

Downy carrion-flower is an herbaceous, annual vine that reaches up to 2.5 meters in height by climbing the surrounding vegetation. There are many leaves along the stem and most of them have tendrils at the base that help them climb. The leaf blades are broadly to narrowly ovate with convex sides and 8-16 cm long. The undersides are dark green and covered with whitish, transparent hairs mainly along the veins. The base of the larger leaves are heart-shaped and the tips are long pointed. Smaller leaves have a more level base and short pointed tip. The two or three long flower peduncles arise from the base of the leaf and are longer than the leaf petioles and sometimes about as long as the leaf. They are flat in cross-section. The round flower cluster at the top of the peduncle contains 10-35 green flowers with tiny sepals and petals both 3.5-5 mm long. The berries, 8-10 mm in diameter, turn from light green to black and are without a white waxy covering (FNA 2002).

This find can be identified vegetatively with leaf characters but is best seen in flower and/or fruit.

Smilax herbacea and Smilax pseudochina are the other two herbaceous species of Smilax without prickles. Smilax pseudochina has leaves with leaf margins which are concave instead of convex and the flower petals are larger, 1.5-2.5 mm long. The berries are blue to black with a white waxy covering. Smilax herbacea has hairless and paler undersides. The fruits turn from light green to dark blue with a white waxy covering. All other species of Smilax are woody perennials with prickles (FNA 2002).

Flowers late April through May, fruits persist through June.

The time of year you would expect to find Powdery Carrion Flower vegetative, flowering, and fruiting in New York.