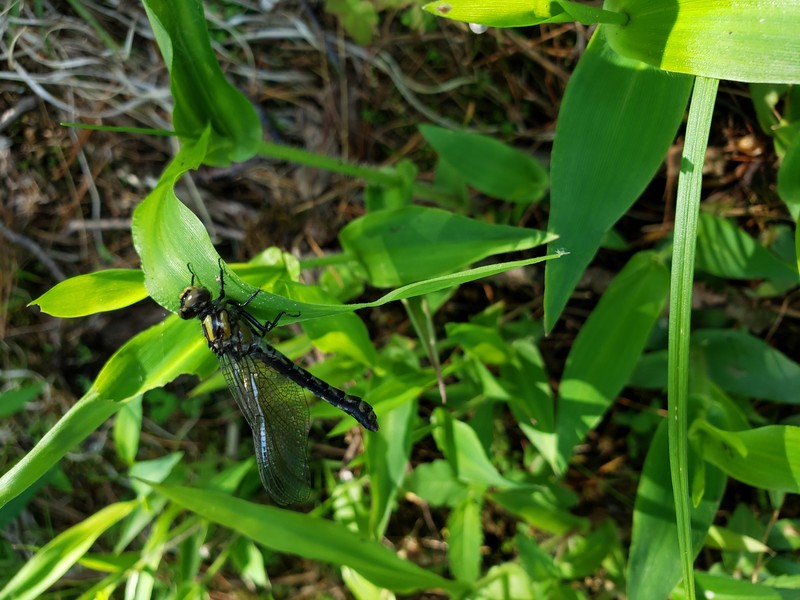 Adult Pygmy Snaketails spend most of their time in the trees that border their breeding habitats which are large, clear rivers surrounded by forest (Paulson 2011).

In New York, Ophiogomphus howei is known from two rivers in a single watershed in northern NY with historical records from an additional watershed (New York Natural Heritage Program 2021). It's current known range is small in the state, found in pristine river habitats with good water quality where threats to habitats could include water contamination, sedimentation, and alteration of natural hydrology (NYS DEC 2005).

Adults Pygmy Snaketails are difficult to detect, even at known sites. Populations should be monitored on a regular basis to confirm persistence. It took several years of emergence-timed surveys to confirm persistence at the Upper Hudson sites. It has not been detected on the Schroon River since 1999 despite more recent survey effort. The populations are therefore estimated to be slightly declining to relatively stable in New York.

Pygmy Snaketails have likely declined substantially in New York from historical populations where they were likely more prevalent on large rivers prior to damming and water pollution. Since 1967, they appear to no longer be present in the Susquehanna River, restricting their current population to the Upper Hudson watershed.

Any activity which might lead to water contamination or the alteration of natural hydrology could impact Pygmy Snaketail populations. Such threats might include roadway and agricultural run-off, industrial pollution, the building of dams, logging activity, development near their habitats, and littering (NYS DEC 2005).The species is known to inhabit pristine flowing waters and have high sensitivity to pollutants (COSEWIC 2018, Paulson 2011). Dams can negatively impact populations by eliminating appropriate substrate for the larvae (Dunkle 2000, COSEWIC 2018). However, in one NY location, exuviae were found immediately downstream of a large dam on the Hudson River (New York Natural Heritage Program 2021). This section of river has appropriate habitat and the larvae may have either floated down from upstream and emerged there, or oviposition is occuring in this section of river below the dam. In general, impoundments are considered a threat to the species in most areas.

Maintaining a large forested riparian buffer surrounding rivers where Pygmy Snaketails occur is essential to survival of both larvae (for water quality) and adults (for roosting and foraging habitat). Any efforts to reduce agricultural run-off, salt run-off from roadways, flow manipulation, and contamination of fast-flowing streams should be considered when managing for this species (NYS DEC 2005).

Further research is needed to define the distribution and population size of the Pygmy Snaketail. In addition, research is required to understand the habitat requirements and threats to this species, and to create appropriate management guidelines for its persistence in known locations (NYS DEC 2005).

In Canada, Pygmy Snaketails are known from New Brunswick, Quebec and Ontario. In the United States, they occur in Maine, New Hampshire, New York, Kentucky, North Carolina, Virginia, Tennessee, Michigan, Minnesota, and Wisconsin. The appear to be extirpated from Massachusetts and possibly extirpated from Pennsylvania. They may occur in Georgia, South Carolina, and West Virginia as well (COSEWIC 2018, NatureServe 2021).

Pygmy Snaketails are the smallest Ophiogomphus species known to inhabit New York. Adults have amber patches on the hind wings. Males have a bright green thorax with a dark, mid-dorsal stripe, a pair of dark shoulder stripes and thin lateral stripes (Nikula et al. 2003). The abdomen is black with a prominent club at the tip with yellowish terminal appendages, short yellow triangles on the dorsal surface of segments 3-7, lines or spots on 8-10, these may be absent from 9-10 or 10. The eyes and face are green. Females are similar to males with thicker abdomens, more extensive yellow markings on sides and hind wing (Nikula et al. 2033, Paulson 2011).

Adults are the easiest to identify, but this species is almost always discovered as exuviae (which are distinct from other Ophiogomphus) because the adults are very elusive, presumably staying mostly high in tree tops. If surveys are timed with mass emergence, an opportunity to see emerging adults can provide the best chance for species confirmation.

Adult males patrol over the water in brief trips and females oviposit "rapidly in large circles over areas of current," both spending most of their time in the forests near rivers (Paulson 2011).

Pygmy Snaketail larvae feed on smaller aquatic invertebrates and adults feed on insects which they capture in flight.

Pygmy Snaketails emerge en masse in early summer, typically near June 1, leaving their exuviae behind on shorelines. Adults mature and spend much of their time in forested riparian areas near breeding waters. Species records are best obtained from exuviae or teneral adult observation and collection near emergence (pers. comm. Paul G. Novak). The flight season is listed as mid-June to mid-July (Mead 2003, Brunelle and deMaynadier 2005).

The time of year you would expect to find Pygmy Snaketail reproducing in New York.

COSEWIC. 2018. COSEWIC assessment and status report on the Pygmy Snaketail (Ophiogomphus howei) in Canada. Committee on the Status of Endangered Wildlife in Canada. Ottawa. https://www.canada.ca/en/environment-climate-change/services/species-risk-public-registry/cosewic-assessments-status-reports/pygmy-snaketail-2018.html

Information for this guide was last updated on: May 24, 2021