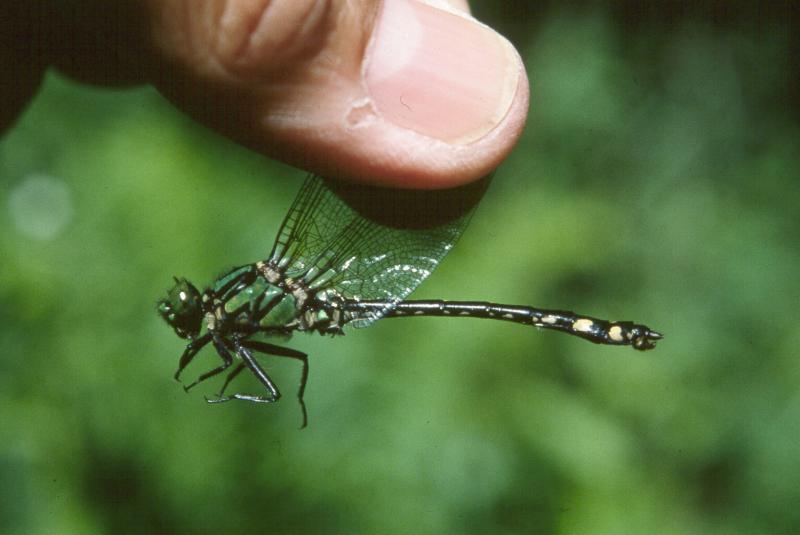 Recent observations of Extra-striped Snaketails have been made in the 1990s to present on the Upper Hudson River, Upper Delaware River, St. Regis River, Raquette River, and Moose River (Donnelly 2004, New York Natural Heritage 2009). In addition to the 1993 surveys by Ken Soltesz, Frank Carle searched the Port Jervis area without success in the 1980s and early-1990s (Soltesz 1994). Thus, it seems likely that the species is gone from this section of the river and has therefore suffered a decline in the vicinity of Port Jervis. There has been no estimate of population size for this species based on statewide occurrences. New location information on the Extra-striped Snaketail in New York may be reflective of heightened interest in surveying for this species rather than a population increase or a range expansion (Holst 2005).

Several historical records are known from the Delaware River in the vicinity of Port Jervis (1 from New York, 1 from New Jersey, 2 from Pennsylvania), all from the 1920-1951 time period. These specimens were all the result of casual collecting. The full extent and size of the populations have not been determined; thus, long-term trends are unclear.

Snaketail larvae require high water quality with high dissolved oxygen content and substrates that have little sedimentation (Lee 2007). Due to the fact that these are intolerant organisms, Ophiogomphids are important components of macroinvertebrate indices to rate water quality in New York. Thus, any activity which might lead to water contamination or the alteration of natural hydrology could impact Extra-striped Snaketail populations (Holst 2005). Such threats might include agricultural run-off and other pollutants, dams, shoreline modifications, increases in the sediment load of rivers, and changes in the dissolved oxygen content (Holst 2005, Lee 2007). Maintaining a forested buffer around the river would be beneficial to adult snaketail populations (Lee 2007). On the Upper Delaware River, the hydrological flow has been altered by two large water supply reservoirs on each of the two branches upstream from Hancock and hydroelectric plants have been built on two major tributaries. The reservoirs act as sediment traps resulting in coarsening of the river bed downstream leading to a lack of finer sediments probably required by nymphs. High flow releases in late summer which are contrary to the natural flow regime may also have a detrimental effect on the larvae (Soltesz 1994).

Further searching and larval sampling may be necessary before specific stewardship needs at a location can be identified. However, any measures to reduce water contamination or hydrological alteration such as agricultural run-off, shoreline development, and damming that would affect river flow should be considered when managing for this species (Holst 2005).

Further research is needed to define the distribution, life history, and population size of the Extra-striped Snaketail. In addition, research is required to understand the habitat requirements and threats to this species, and to create appropriate management guidelines for its persistence in known locations (Holst 2005, Lee 2007).

The Extra-striped Snaketail inhabits clear, rapid and cold, medium to large rivers with high dissolved oxygen content and high water quality (Dunkle 2000, Mead 2003, Lee 2007). They can often be found perched on bushes near the tree line, bordering riffle areas of rivers (Dunkle 2000) and are known to spend much of their time aloft and perched high in the treetops (Mead 2003). Along the Aroostook River in Maine, emerging larvae of this species were the most widely distributed Ophiogomphid along a 137 Km river stretch occurring in both the upper reaches and downstream sections, but was most abundant in mid to lower reaches. These habitats were characterized by having higher percentages of land use devoted to human uses such as agriculture and industry and had higher temperatures, and a larger variety of substrate partcicles (silt, sand, cobble, pebble) than more upstream locales (Gibbs et al. 2004).

The Extra-striped Snaketail has been confirmed from nine counties in the eastern portion of the state in the 1990s to present in larger rivers of the Adirondacks and Catskills (Donnelly 2004, New York Natural Heritage Program 2009). It is not known to occur in western New York.

Snaketails are characterized by their bright green thorax and are part of the Clubtail family. As their name suggests, Clubtails have an enlarged tip on the end of their abdomens, giving them a club-like appearance. The Extra-striped Snaketail has green lateral thoracic stripes forming an N shape above the base of the legs (Mead 2003). They are an average of 1.7 inches long. They have green eyes and, as with all gomphids, their eyes are separated dorsally. This species has black legs and narrow black cross-stripes on their face (Dunkle 2000). They have a black abdomen with a moderately widened "club" at the end and yellow dorsal spots. The dorsal spots of abdominal segments 9 and 10 are more rounded than those of other segments. Segments 7-10 have yellow side spots of various shapes (Mead 2003).

Adult Extra-striped Snaketails spend most of their time in treetops away from water, but they can occasionally be found in bushes near riffle areas of rivers (Dunkle 2000). Larvae are aquatic and burrow in the sandy substrate of rivers (Mead 2003). Nevertheless, larval drift could be important because the highest numbers of emerging Ophiogomphids in Maine were found at the furthest downstream station on the Aroostook River, but Ophiogomphids are rarely captured in drift samples (Gibbs et al, 2004). Extra-stiped larvae emerge from the water to shed their larval skin and transform into adult form early in the spring during a short, synchronous period with five other Ophiogomphus species (Gibbs et al. 2004). Maine researchers showed that the larval life histories of the six co-occurring Ophiogomphid species had a high degree of spatial and temporal overlap. This lack of ecological differentiation could suggest that this larval assemblage has evolved a suite of convergent traits that enhance fitness in a riverine habitat. Alternatively, a similar scenario is also seen in certain damselflies, where differentiation of the mate recognition system in winged adults has driven a radiation (Gibbs et al. 2004). An identical Ophiogomphid assemblage occurs on the upper Hudson River in Warren County and it is likely the same ecological and evolutionary factors are in play at this locale; however Ophiogomphus anomalus appears to be found in lower numbers here than was recorded in Maine (Gibbs et al. 2004, New York Natural Heritage Program 2009).

The time of year you would expect to find Extra-striped Snaketail present and reproducing in New York.

Soltesz, Ken. 1994. A field survey of the odonata of the Upper Delaware River (Port Jervis to Callicoon) with a tentative status assessmenet for Ophiogomphus anomalus in New York State.

Information for this guide was last updated on: October 28, 2009