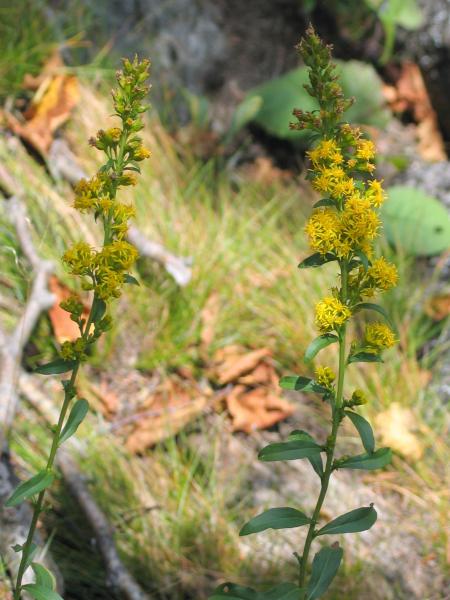 State Conservation Status Rank
S2S3
Imperiled or Vulnerable in New York - Very vulnerable, or vulnerable, to disappearing from New York, due to rarity or other factors; typically 6 to 80 populations or locations in New York, few individuals, restricted range, few remaining acres (or miles of stream), and/or recent and widespread declines. More information is needed to assign either S2 or S3.
Global Conservation Status Rank
G5T4
Apparently Secure globally - The subspecies/variety is uncommon in the world but not rare; usually widespread, but may be rare in some parts of its range; possibly some cause for long-term concern due to declines or other factors. (The species as a whole is common globally.)

The specific epithet monticola means dweller of the mountains. Although not a true alpine plant, this species is often found in mountainous regions.

There are 21 known extant populations. At least six of these are very small with under 50 individuals.

There are no clear data on short-term trends.

Many new populations are being found in Essex County at middle elevationss on cliffs and rivershores. No populations are known to have become extirpated. Many of the populations are quite small with under 50 individuals, but there is no evidence that these populations are declining. Overall, long-term trends are unclear but may indicate a stable situation.

All of the populations appear to be secure, although in many cases quite small. There are no known threats.

Specimens need to be checked to confirm that they are not the closely related species S. simplex var. racemosa.

In New York, this taxon grows primarily on cliffs, ledges, and rock outcrops. It is also known from talus slopes below exposed rocky sites. The cliffs and ledges where this taxon occurs can be in forested areas or more often in exposed, open areas. The rocks are primarily acidic but this taxon also grows where there appears to be some calcareous influence. The populations are primarily in cool, relatively high elevation sites but it is not a member of the true alpine flora (New York Natural Heritage Program 2007). Dry serpentine soils, granitic rocky barren uplands of mountains below alpine slopes (Semple and Cook 2006). Plants mostly of cliffs and ledges (Haines and Vining 1998).

In New York, this taxon is known only from northern New York, mostly restricted to the Adirondacks.

This taxon occurs as small disjunct populations throughout its range, which is from northern New York east to Massachusettes, Vermont, New Hampshire, Maine, and southern Quebec (Semple and Cook 2006)

Rand's mountain goldenrod is a perennial herb. It is related and somewhat similar to other more widespread goldenrod species. The stems are 10-83 cm tall and have 3-35 leaves on them. Some leaves occur only as rosettes on the ground. The lower stem leaves are 4-16 cm long and have teeth on their margins while the upper leaves are 1-8 cm long. The flowers occur in dense clusters or heads with 3-150 heads per plant. The flowers are yellow, and similar to dandelions, the mature fruits have capillary hairs that aid in dispersal (Semple and Cook 2006).

Mature plants in flower or early fruit are easiest to identify.

This goldenrod can be distinguished from most others by its having heads in axillary clusters which are not secund, inflorescences racemiform to paniculiform, basal leaves present when in flower, and viscid phyllaries, peduncles, and leaves.

Solidago puberula can look somewhat similar. It differs from Solidago randii in having the stems densely puberulent and the plants not viscid.

Solidago racemosa grows in different habitat (rocks, usually calcareous, associated with rivers) but otherwise is quite similar. It differs in having the proximal cauline leaves lanceolate to narrowly spatulate (compared to obovate to spatulate), (2-)3.7-9.5(-17) mm long (compared to (5-)10-22(-31) mm long), and leaf margins entire or dentate, rarely serrate (compared to crenate to serrate) (Semple and Cook 2006).

The time of year you would expect to find Rand's Goldenrod flowering and fruiting in New York. 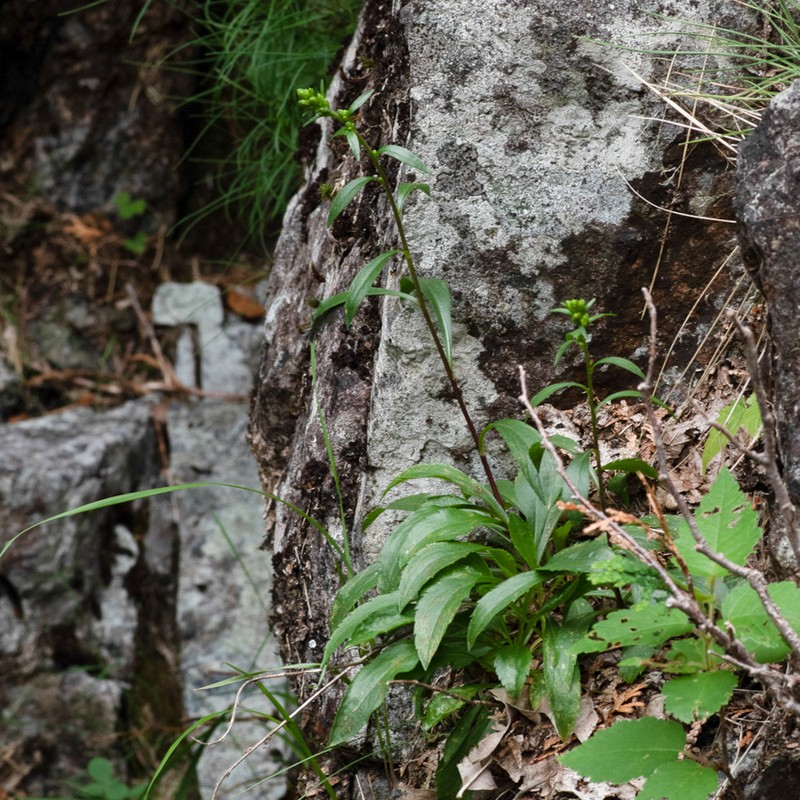 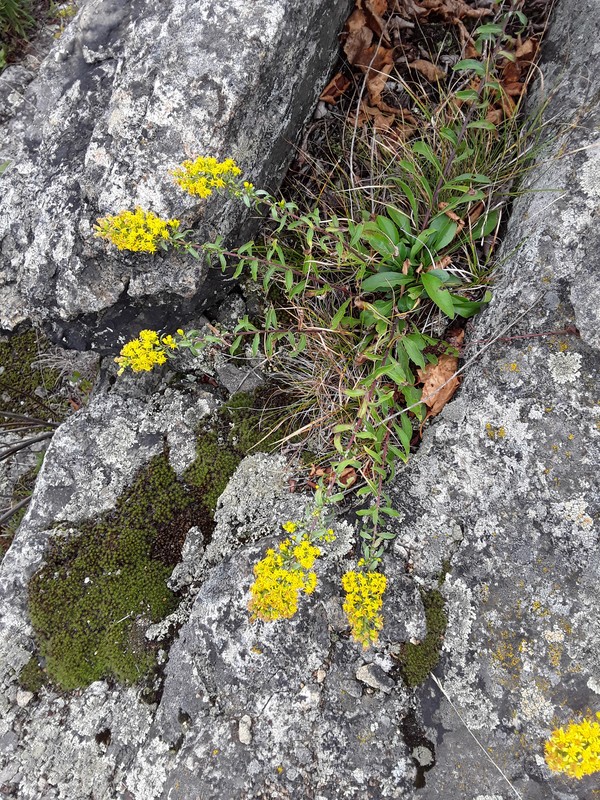 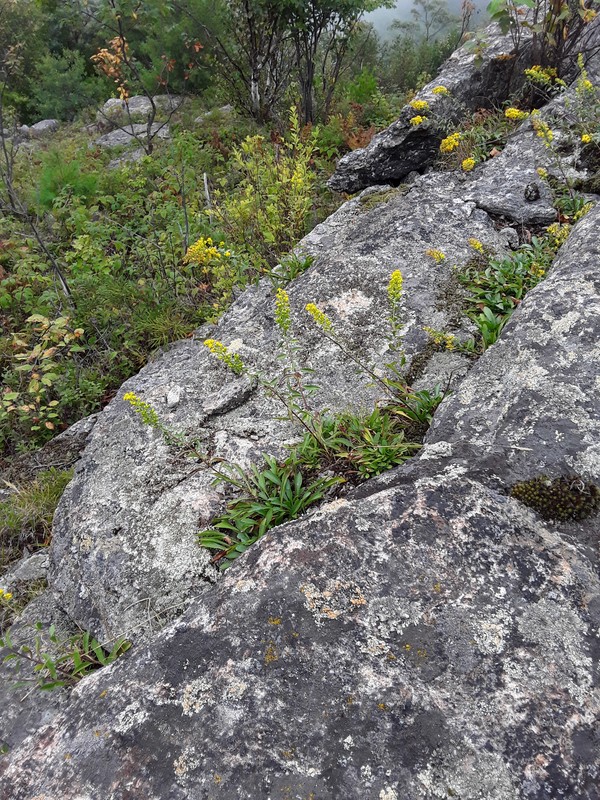 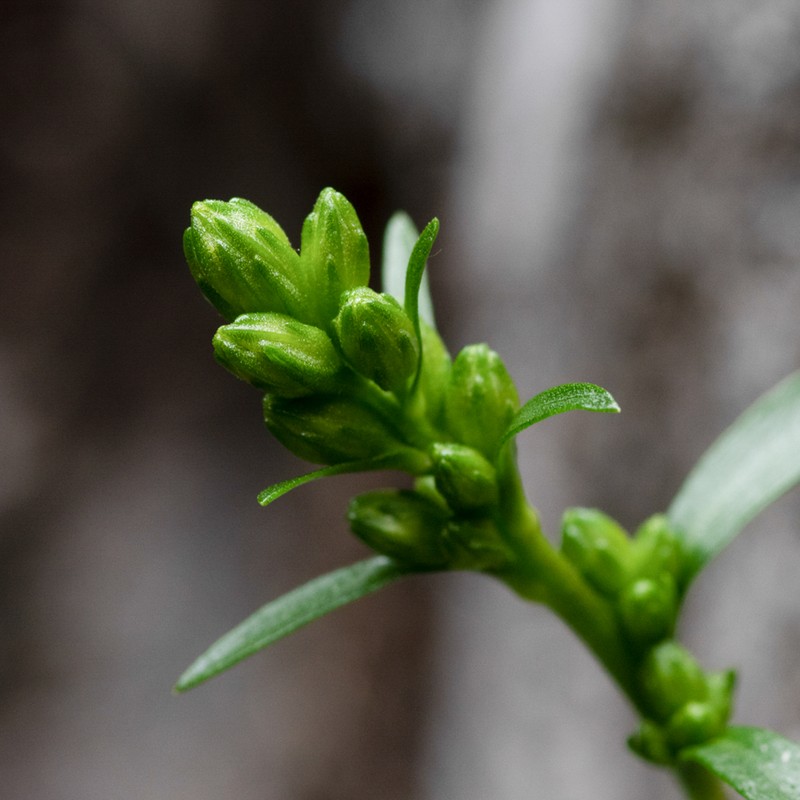 This taxon has been recognized under the name Solidago glutinosa. The older name S. simplex, based on the type from Mexico, was found to be conspecific and takes priority at the species level (Nesom 1989). Within S. simplex two subspecies (ssp. simplex and ssp. randii) are recognized. Under ssp. randii four varieties (var. monticola, var. racemosa, var. gillmanii, and var. ontarioensis) are recognized (Ringius and Semple 1991, Semple and Cook 2006). Kartesz and Gandhi (1991) created the name S. simplex var. randii to replace S. simplex ssp. randii but the name monticola takes priority at the rank of variety. Therefore, the taxon detailed in this conservation guide is known by the quadrinomial Solidago simplex ssp. randii var. monticola (Ringius and Semple 1991, Semple and Cook 2006). It can also simply be called Solidago simplex var. monticola as all varieties under S. simplex (including both subspecies) have unique names in accordance with Greuter et al. (2000). Fernald (1970) and Gleason and Cronquist (1991) circumscribe this taxon slightly differently then is currently accepted and therefore only more recent authors (Haines and Vining 1998, Semple et al. 1999, Semple and Cook 2006) should be followed. The name was changed to Solidago simplex var. monticola in the Asteraceae, volume 20 of Flora of North America and the NY Flora Atlas. In 2007, we adopted this change.