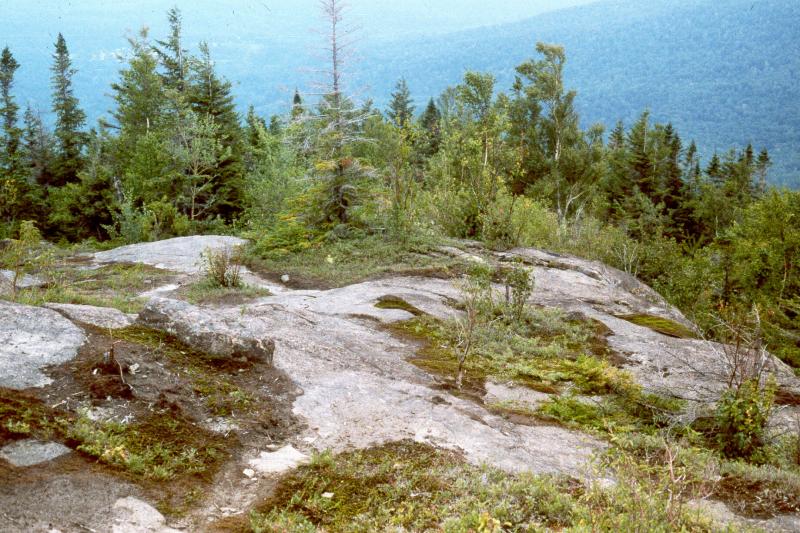 The bark blisters on balsam fir contain oleoresin, used as a medium to mount microscope specimens, in the production of glue, as a cement for optical systems, and in the manufacturing of candles. Varnishes, turpentine, and balsam oil are also manufactured from this resin.

There are a few hundred occurrences statewide. There are a few large, high quality occurrences protected on state land. This community is limited to the higher elevations of the Adirondack and Catskill Mountains. The current trend of this community is probably declining slightly due to the combined effects of atmospheric deposition and recreational overuse. This community has probably declined moderately from historical numbers likely correlated with fire suppression, development, and to a lesser extent logging.

The number and acreage of spruce-fir rocky summits in New York have probably remained stable in recent decades as a result conservation efforts at high elevation areas in the state.

The number and acreage of spruce-fir rocky summits in New York have probably declined moderately from historical numbers as a result of fire suppression, summit clearing for development, and mining of mineral resources.

Communities that occur at higher elevations in the state (e.g., >3,000 feet) may be more vulnerable to the adverse effects of atmospheric deposition and climate change, especially acid rain and temperature increase. Spruce-fir rocky summits are threatened by development on the summit and in the surrounding landscape (e.g., fire towers, residential, ski slopes) and trampling by recreational visitors (e.g., hikers, rock climbers). Given the stunted and gnarly growth form of summit trees, the community is only minimally threatened for timber resources. Summits on unprotected land may targeted for mining of mineral resources. Natural fire regimes (e.g., from lightning strikes) may be suppressed in some areas, but are apparently intact at many sites, especially in the Adirondacks. Clearing in the adjacent forest may be a threat that provides corridors for invasive plants. A few examples are threatened by invasive species, such as bluegrass (Poa compressa). Spruce budworm may be considered a threat to occurrences of spruce-fir rocky summit that experience extreme outbreaks, especially if it coincides with other stresses and reduces tree regeneration. The spruce budworm (Choristoneura fumiferana) is a native insect that creates canopy gaps in spruce and fir forests of the eastern United States and Canada. Since 1909, there have been waves of budworm outbreaks throughout the eastern United States and Canada. The states most often affected are Maine, New Hampshire, New York, Michigan, Minnesota, and Wisconsin (Kucera and Orr 1981). Balsam fir is the primary host tree for budworm in the eastern United States, although white, red, and black spruce are known to be suitable host trees. Spruce budworm may also feed on tamarack, pine, and hemlock. Spruce mixed with balsam fir is more likely to show signs of budworm infestation than spruce in pure stands (Kucera and Orr 1981). Mountain spruce-fir forests are threatened by acid rain deposition. The ability of forest soils to resist, or buffer, acidity depends on the thickness and composition of the soil, as well as the type of bedrock beneath the forest floor. Places in the mountainous Northeast, like New York's Adirondack and Catskill Mountains, have thin soils with low buffering capacity. Forests in high mountain regions are often exposed to greater amounts of acid than other forests because they tend to be surrounded by acidic clouds and fog that are more acidic than rainfall. When leaves are frequently bathed in this acid fog, essential nutrients in their leaves and needles are stripped away. This loss of nutrients in their foliage makes trees more susceptible to damage by other environmental factors, particularly cold winter weather (US EPA 2005).

Soils are very thin in and around this community and the effect of clearing and construction on soil retention and erosion must be considered during any development activities. Similarly, these soils are acidic and nutrient-poor and any soil enrichment contamination (e.g., from septic leach fields or fertilized lawns) can alter community structure and function. The open structure of this community is maintained by fire and presents a fire hazard to existing and proposed development. Unprotected structures located within or near this community are more susceptible to damage from fire.

Survey for new occurrences in the Adirondacks and Catskill mountains in order to advance documentation and classification of mountain spruce-fir rocky summits. A statewide review of alpine and high elevation (>3,000 feet) communities is desirable. Continue searching for large sites in good condition (A- to AB-ranked).

This community spans north to Quebec, west to Ontario, south to North Carolina and Tennessee, and east to Nova Scotia.

Spruce-fir rocky summits are located in the Catskill and Adirondack Mountains, on non-calcareous rocky outcrops and summits. The relatively open canopy is dominated by red spruce and balsam fir, and the associated vegetation may be sparse and patchy, with numerous rock outcrops and slides.

Known examples of this community have been found at elevations between 1,400 feet and 4,626 feet.

Flowers and grasses may be in bloom throughout the growing season, and blueberries may be present during midsummer. 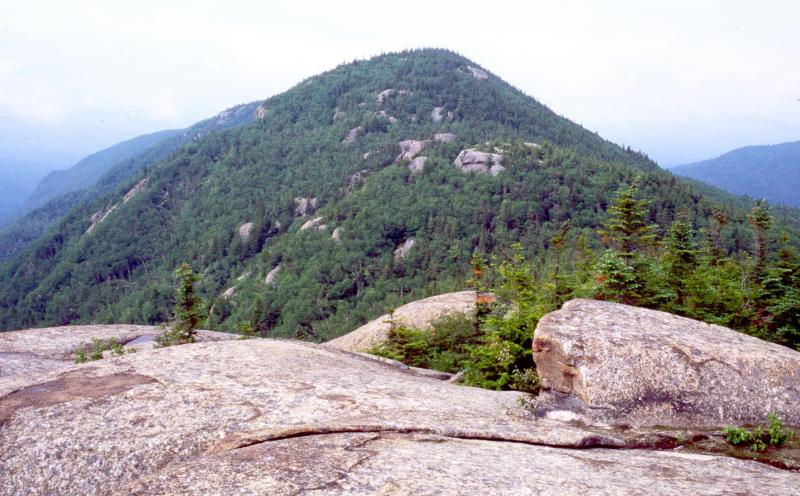 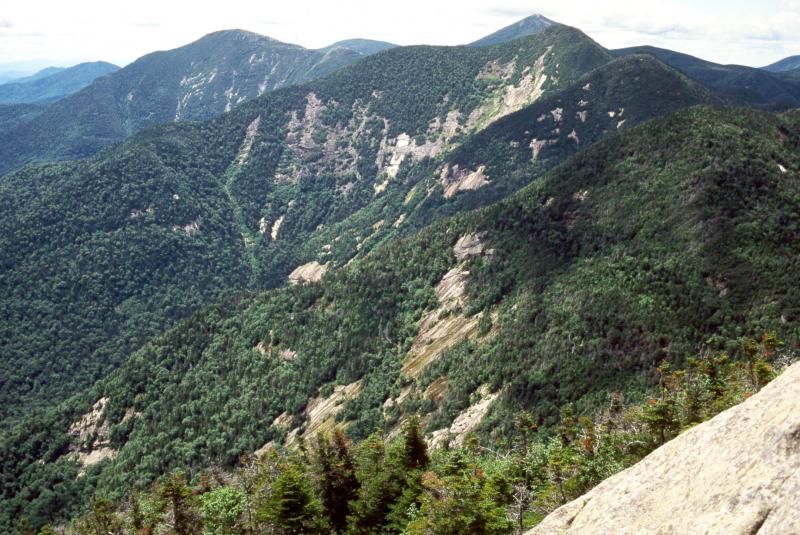 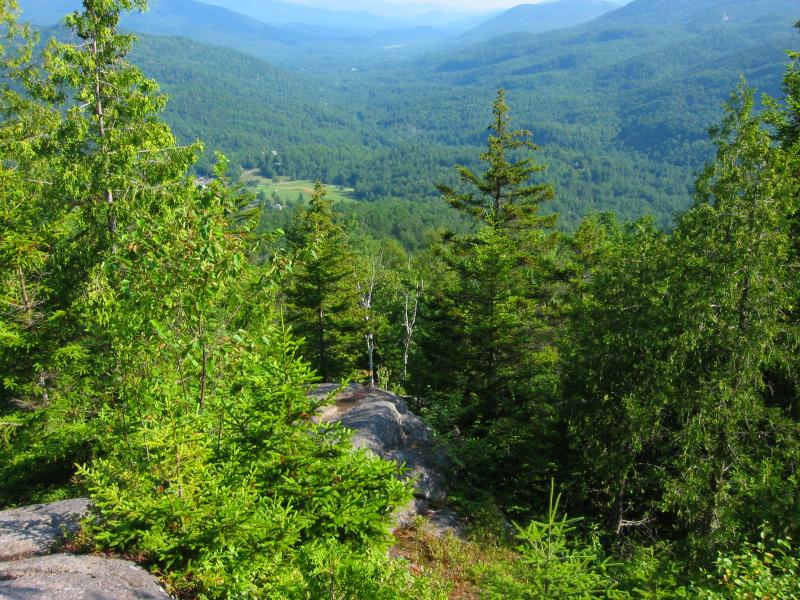 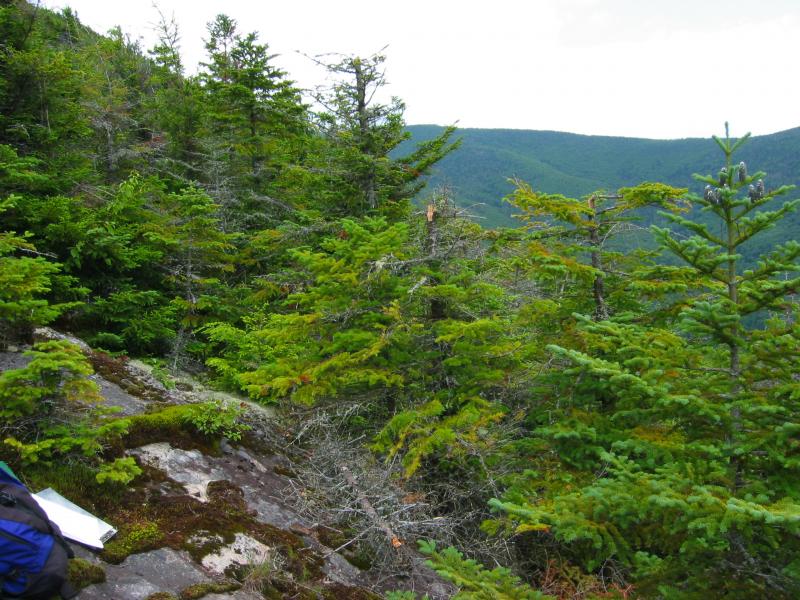 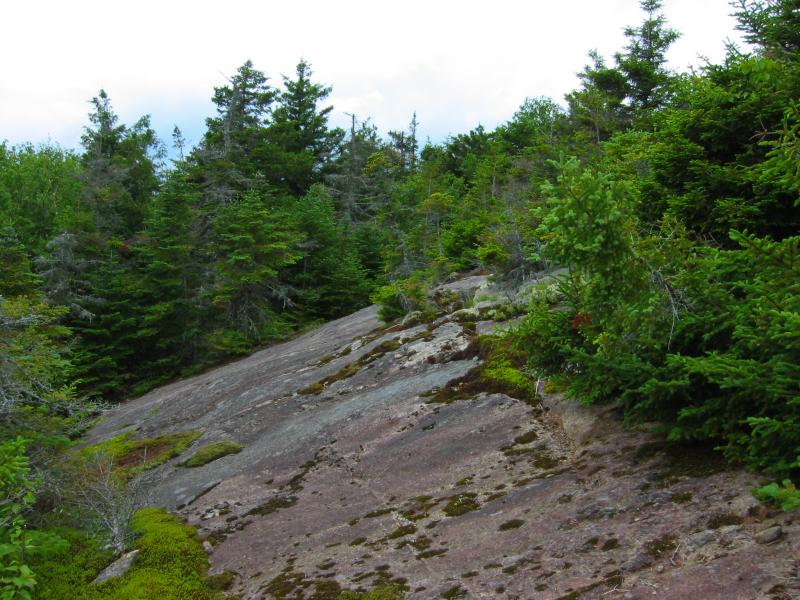 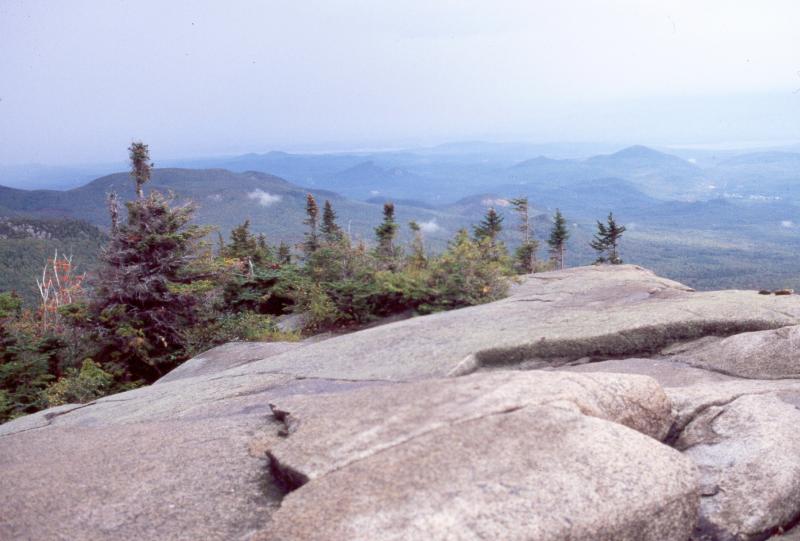 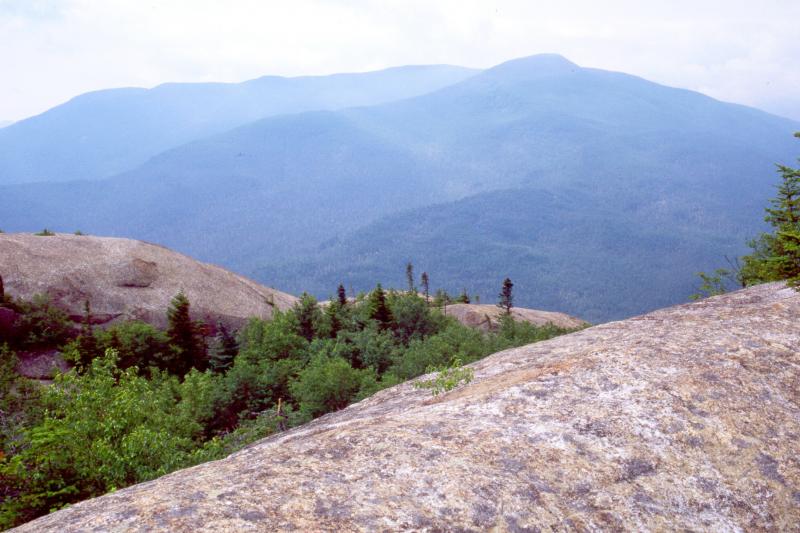 This figure helps visualize the structure and "look" or "feel" of a typical Spruce-Fir Rocky Summit. Each bar represents the amount of "coverage" for all the species growing at that height. Because layers overlap (shrubs may grow under trees, for example), the shaded regions can add up to more than 100%.

Information for this guide was last updated on: April 23, 2019