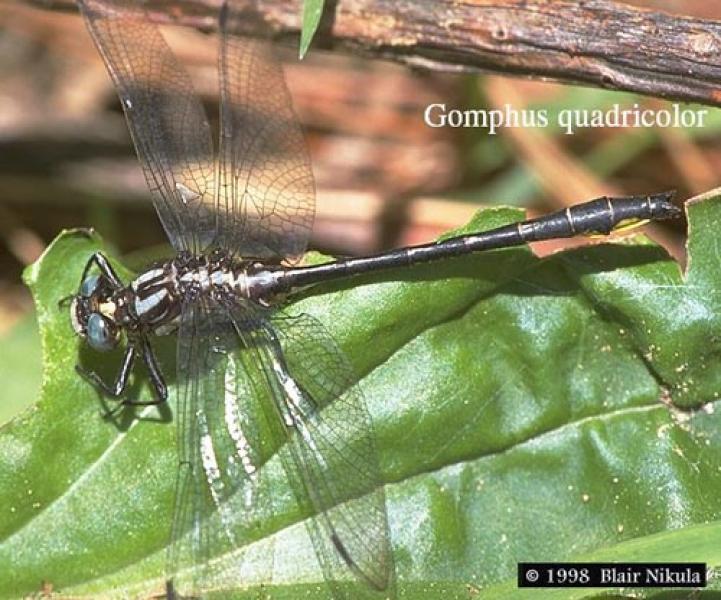 All adult dragonflies are aerial predators that hunt and capture other insects on the wing for food. Gomphus females have larger spines on their hind legs, allowing them to capture larger prey than their male counterparts (Dunkle 2000).

There are five extant and two historical locations where this species is known to occur in New York State, with no population estimates determined. There are two locations in the state where exuviae have been found, but no adult sightings were confirmed. If these records are confirmed, this may change the rank to an "S2".

There has been no estimate of population size for this species based on statewide occurrences. These occurrences have been reported from the late 1990's to present, and information prior to this time frame is limited. Therefore, any new location information on the Rapids Clubtail in New York may be reflective of heightened interest in surveying for this species rather than a population increase or a range expansion (Holst 2005).

There are two known historical occurrences of Gomphus quadricolor in New York State, in Broome and Tompkins counties. Five extant occurrences have been located in Warren, Saratoga, Orange, Ulster, St. Lawrence, Sullivan, and Broome counties. There is no existing information regarding the current existence of populations at these locations; therefore long-term trends are unclear.

Any activity which might lead to water contamination or the alteration of natural hydrology could impact Rapids Clubtail populations (Holst 2005). Such threats might include agricultural run-off, heavy siltation, flow manipulation of streams and rivers, residential development, and recreational boating (Holst 2005, Cuthrell 2000).

Any efforts to reduce agricultural run-off, habitat alteration (including development and clearcutting) and contamination of streams and rivers should be considered when managing for this species (Cuthrell 2000).

Further research is needed to define the distribution and population size of the Rapids Clubtail. In addition, research is required to understand the habitat requirements and threats to this species, and to create appropriate management guidelines for its persistence in known locations (Holst 2005).

The Rapids Clubtail has been confirmed in locations from 10 counties. While no population estimates have been made, they are known to occur in large, shallow, swift-flowing rivers throughout the state including the Upper Delaware River and the Upper Hudson River. More inventories are needed to determine the full extent of its statewide range (Holst 2005).

The Rapids Clubtail is known to range from Ontario and southwestern Maine to its western limit in eastern Minnesota, south to Alabama. (Walker 1958, Needham and Westfall 1955). This species may be at risk in Ontario as it is extirpated from one of the four known sites.

As their name suggests, Clubtails have an enlarged tip on the end of their abdomens, giving them a club-like appearance. Not only is this species uncommon in New York State, but it is difficult to see due to its camouflaged coloration. The Rapids Clubtail is greenish yellow in color with blackish brown stripes and a blackish abdomen with yellow dorsal (top) and lateral (side) stripes (Needham et al. 2000, Nikula et al. 2003). They are 42-45 mm (1.7-1.8 inches) in length with a 31-34 mm abdomen. They have blue-green eyes and, as with all Gomphids, their eyes are separated dorsally. They have a slender abdomen with a widened "club" at the end and abdominal segments 8-10 are dark dorsally, with yellow, linear spots present on the top of the other abdominal segments. Yellow to gray-green stripes occur laterally on all abdominal segments. The male anterior hamule (the top pair of terminal appendages, consisting of hardened cuticle, which borders the genital pocket) is sickle-shaped and female sub-genital plate is thick and 1/7 as long as abdominal segment 9 and has a V-notch nearly to the base. They may be distinguished from other similar species by the following characteristics: Adults have a more prominent club and less yellow on the abdomen and completely black legs. Also, females have more yellow spotting on their abdomen.

Gomphid larvae spend much of their time burrowing into the substrate of streams and rivers where they are found. Adults are found perching on the ground, on emergent rocks in streams and rivers, or on leaf surfaces (Nikula et al. 2003). Adult females oviposit by tapping their abdomens onto the surface of swift-flowing water while simultaneously releasing eggs (Nikula et al. 2003, Mead 2003).

Rapids Clubtail larvae feed on smaller aquatic invertebrates and adults feed on insects which they capture in flight.

Adults are active from late May through mid-July. Larvae may be found in appropriate aquatic habitats year-round. Exuviae (cast skin of dragonfly larvae) are best found in June (Cuthrell 2000).

The time of year you would expect to find Rapids Clubtail present and reproducing in New York.

Information for this guide was last updated on: February 28, 2007