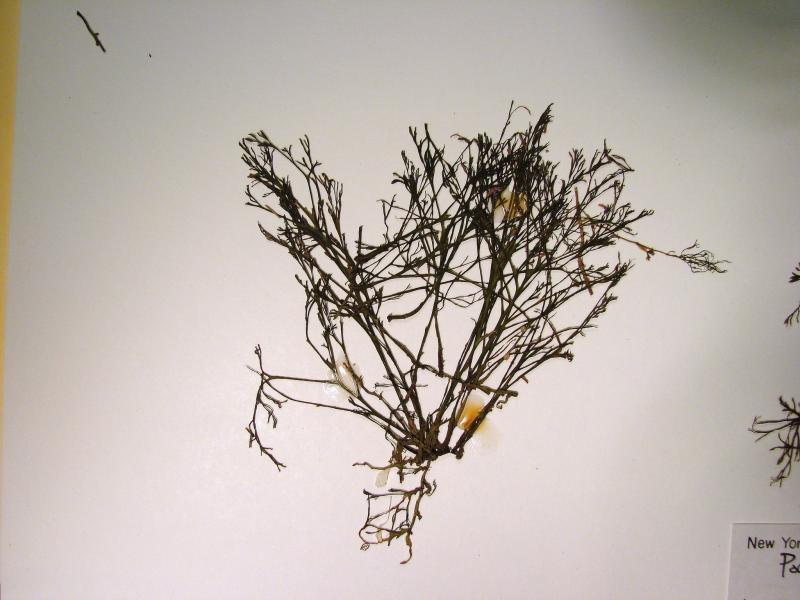 This is the only member of this genus and family that occurs in North America. The genus is confined to the New World (Philbrick and Novelo 2004). The genus name Podostemum comes from the greek words for foot and stamen and is in reference to the stamens appearing "raised on a stalk by the side of the ovary" (Fernald 1970). The specific epithet ceratophyllum means horn-leaf (Fernald 1970) and may be in reference to the narrow stiff leaves of this species.

There are 16 known extant populations and 8 populations which have not been seen in recent years and are considered historical. Many of the populations are clustered along particular rivers. Habitat is somewhat limited for this species but certainly not rare.

Fifteen out of the 16 known extant populations have first been documented in the past 30 years. This would seem to point to an increase in this species but since this species is often overlooked, resembles algae, and grows in habitat that make it difficult to detect, it is equally possible that these "new" populations were simply overlooked in the past. Overall, short term trends are not clear but probably are at least stable.

Some of the streams where this species occurs may be used for a water source. This development could result in a change to the stream that would make the habitat less suitable for riverweed. Other populations are threatened by water quality deterioration as a result of development, agriculture, and run off from a sewage treatment plant (New York Natural Heritage Program 2007). Negative impacts on rivers including siltation, nutrient pollution, and dam building have been considered threats to this species (Quiroz et al. 1997 in Philbrick and Novelo 2004).

Water quality of the rivers where this species occurs, should be protected.

This species occurs from Nova Scotia and New Brunswick, west to Quebec and southeastern Ontario, and south to Georgia, Louisiana, Arkansas, and Oklahoma. It is disjunct in the Dominican Republic, and Honduras (Philbrick and Novelo 2004).

Riverweed is an olive-green, aquatic plant of firm texture that grows in streams and rivers attached to rocks. It resembles seaweed, alga, or moss and attaches to rocks by fleshy disks. The stems are 2-30 cm long and often branched. The leaves are very narrow and divided into numerous linear lobes. The flowers are small, not showy, and scattered along the stems (Fernald 1970, Gleason and Cronquist 1991, Philbrick and Novelo 2004).

It is easiest to identify this plant when it is in flower or fruit although vegetative material, when not confused with alga or moss, is also relatively easy to identify.

This species is perhaps superficially similar to alga and moss but can be distinguished from both by its true although minute flowers, its firm texture, fleshy disks (which attach to the substrate), and stipule-like appendages at the bases of the leaves. The latter three characters will also help separate this species from other aquatic vascular plants.

Flowers and/or fruits are present from mid-June through early October. Since this species often grows submerged in rapids and fast moving water it can be difficult to spot. Therefore, the best time to survey for this species is between mid-June and early October and when water levels are low.

The time of year you would expect to find Riverweed vegetative, flowering, and fruiting in New York. 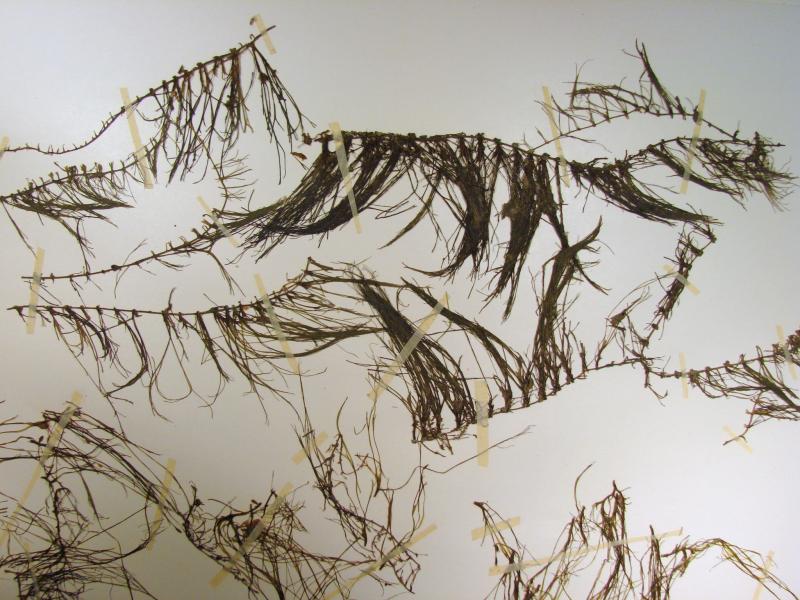 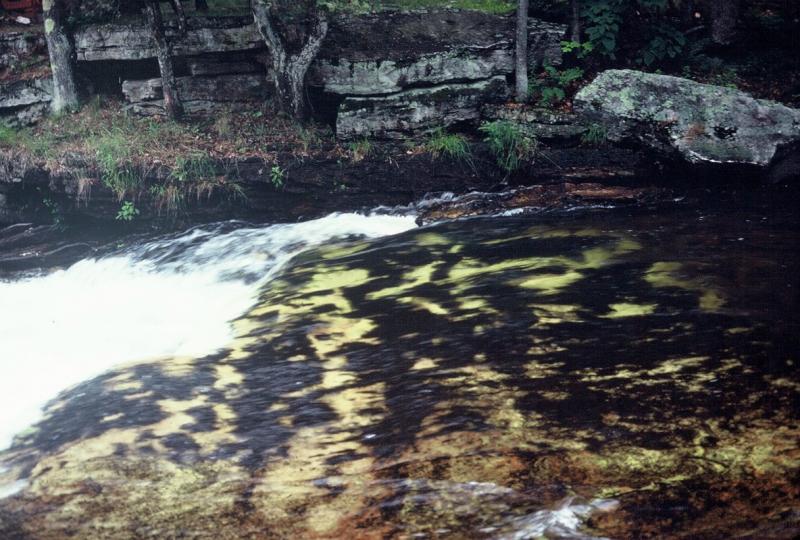 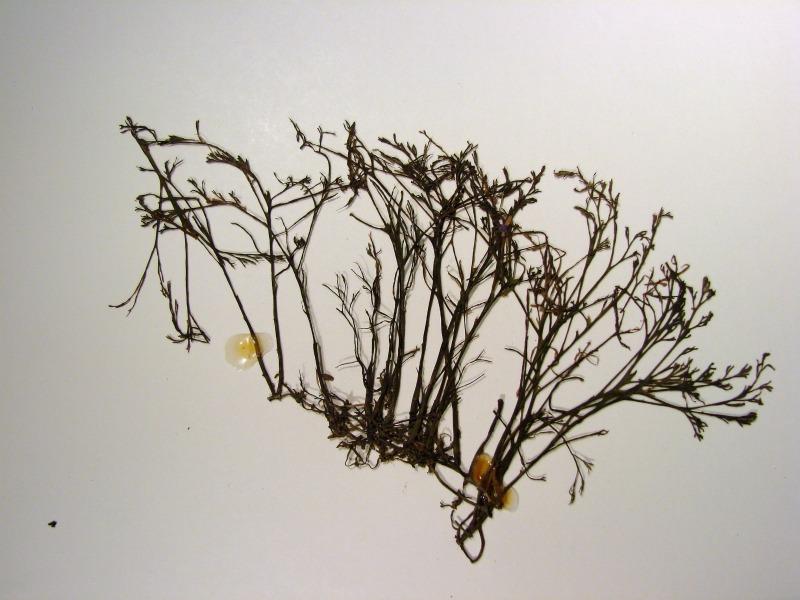 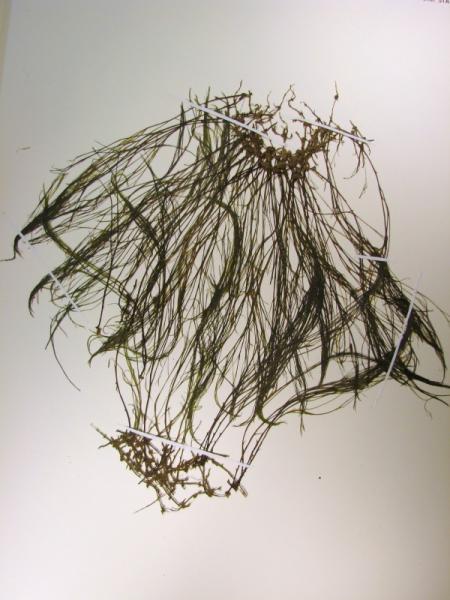 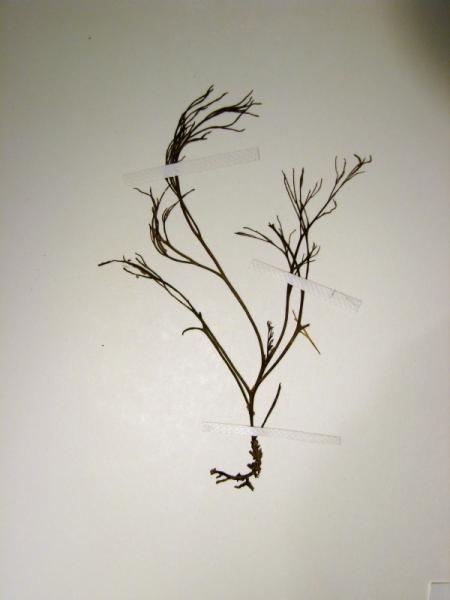 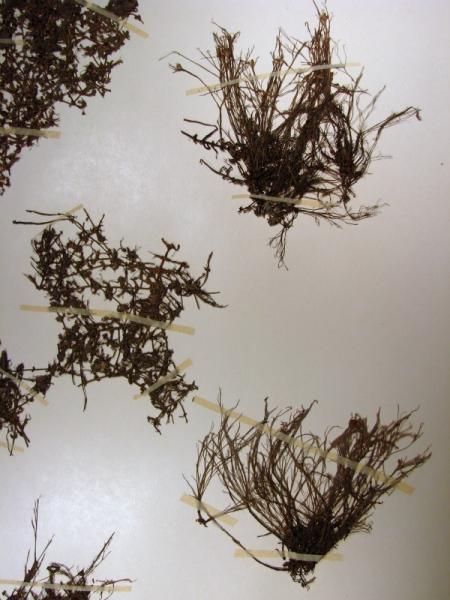 When Michaux (1803) described this genus he used the spelling "Podostemum" in the text and then in a plate illustrating Podostemum ceratophyllum he used the spelling "Podostemon". It appears that Michaux's Podostemon was in error (Sprague 1933) and the family Podostemaceae (based on Podostemum) has been conserved as the correct spelling (McNeill et al. 2006). Podostemon is therefore considered an orthographic variant and is to be replaced by the correct spelling Podostemum.

Information for this guide was last updated on: January 22, 2008