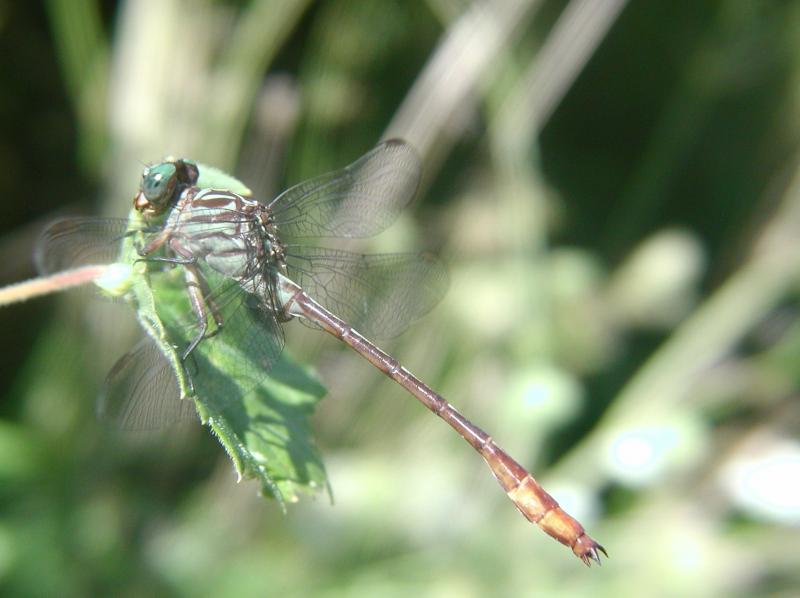 Dragonflies in the Clubtail family of the genus Stylurus are known as the Hanging Clubtails. They get their name from their perching behavior. When they perch on leaves in trees, their weight can bend the leaves downward until they are "hanging" almost vertically (Dunkle 2000, Mead 2003).

The Russet-tipped Clubtail is known to occur in seven counties in New York State, with no population estimates determined. Further survey efforts may result in the identification of additional populations, range expansions, or enable population sizes to be estimated.

No estimate of population size for the Russet-tipped Clubtail has been made based on observations made in the early and mid-1990s (New York Natural Heritage Program 2007). Information prior to this time frame is limited. Therefore, any new location information on the Russet-tipped Clubtail in New York may reflect heightened interest in surveying for this species rather than a population increase or a range expansion (Holst 2005).

Recent observations of Russet-tipped Clubtails have been made in Columbia and Dutchess counties, New York in the early 1990s. General reports of observations made also include locations in Albany, Greene, Putnam, Rockland, and Warren counties, as well as on Long Island (Gebauer et al. 2005, Donnelly 2004). Since these are fairly recent records, and the full extent and size of the populations have not been determined, long-term trends are unclear.

Any activity which might lead to water contamination or the alteration of natural hydrology could impact Russet-tipped Clubtail populations (Holst 2005).

Any efforts to reduce water contamination, hydrological alteration, and surrounding upland development of rivers, streams, and large lakes should be considered when managing for this species (Holst 2005).

Further research is needed to define the distribution and population size of the Russet-tipped Clubtail. In addition, research is required to understand the habitat requirements and threats to this species, and to create appropriate management guidelines for its persistence in known locations (Holst 2005).

The Russet-tipped Clubtail inhabits rivers, streams, and large lakes with sandy substrate (Walker 1958, Dunkle 2000). Larvae are aquatic and found in the water during this lifestage, whereas adults are terrestrial and are found in habitats surrounding streams, rivers and lakes.

The Russet-tipped Clubtail is confirmed in locations from seven counties in the eastern portion of the state, as well as Long Island (Donnelly 2004, Gebauer et al. 2005, New York Natural Heritage Program 2007).

The Russet-tipped Clubtail is distributed across North America from Ontario and the northeastern United States south to Florida, then west to the midwest as far as South Dakota south to Texas. It is also known to occur in New Mexico, Arizona, California, and Nuevo Leon and Sonora, Mexico (Dunkle 2000, Abbott 2007).

As their name suggests, Clubtails have an enlarged tip on the end of their abdomens, giving them a club-like appearance. Clubtails in the genus Stylurus have long and slender abdomens with small to moderately sized clubs. The eastern form of the Russet-tipped Clubtail has a gray-green thorax with dark lateral (side) stripes. This form also has a rusty orange "club" (on abdominal segments 7-10). They are 2.4 inches in length with green eyes and, as with all Gomphids, their eyes are separated dorsally (from the top-down view). Their abdomens are brown with a median green stripe. Male terminal appendages and female subgenital plates are distinctive from other Stylurus species when examined under magnification. Female Russet-tipped Clubtails are more drab, have a more elongate abdomen, and a much narrower club than males. Both sexes have a brownish face and short, blackish brown legs.

Gomphid larvae spend much of their time burrowing into the substrate of rivers and lakes were they are found. Adult Stylurus prefer perching spots on leaf surfaces in trees high off the ground (Nikula et al. 2003). They maintain prolonged flights over water to forage and fly to treetops to consume their meal (Walker 1958). Adult males patrol from 9 A.M. to dark and are strong fliers (Dunkle 2000).

Russet-tipped Clubtail larvae feed on smaller aquatic invertebrates and adults feed on insects which they capture in flight, frequently diving into the water to retrieve a prey item (Walker 1958).

Stylurus plagiatus are active from late June into late September in a northern climate (Dunkle 2000). Clubtails in the genus Stylurus are most abundant in August and early September (Nikula et al. 2003). Adult males may be found patrolling their territories from 9 in the morning until dark (Dunkle 2000). Larvae may be found in appropriate habitats year-round.

The time of year you would expect to find Russet-tipped Clubtail present and reproducing in New York. 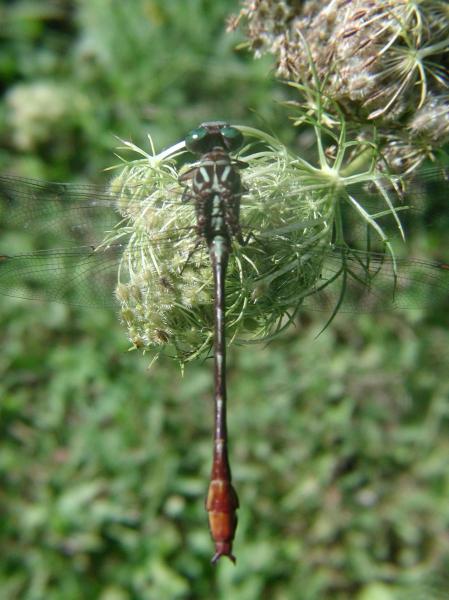 Information for this guide was last updated on: April 5, 2007