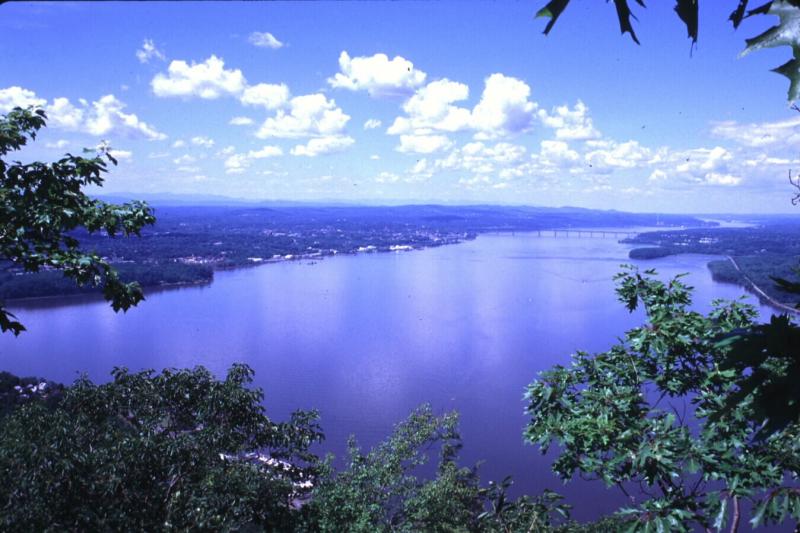 Although it has not been confirmed, the Hudson River is purported to be the world's longest tidal river, reaching 150 miles. The Hudson River is home to both the shortnose and Atlantic sturgeon. Their appearance today is almost the same as when dinosaurs walked the earth during the Triassic period, 245 to 208 million years ago. They are among the oldest living fish species. You can find more information on our sturgeon conservation guides.

The number and acreage of tidal rivers in New York have probably declined moderately from historical numbers likely correlated with shoreline development and dredge spoil deposition. Water pollution was a very serious threat several decades ago, but has improved with the advent of pollution control facilities and regulations.

The Hudson River is recovering from several hundred years of pollution, shoreline development, dredging, commercial shipping, recreational overuse, and invasion by exotic species. Smaller tidal rivers on Long Island have had similar impacts, but at a smaller scale.

Where practical, establish and maintain a riparian buffer to reduce storm-water, pollution, and nutrient run-off, while simultaneously capturing sediments before they reach the river. Buffer width should take into account the erodibility of the surrounding soils, slope steepness, and current land use. If possible, minimize the number and size of impervious surfaces in the surrounding landscape. Avoid habitat alteration within the river and surrounding landscape. For example, roads should not be routed through the riparian buffer area. If the river must be crossed, then bridges are preferred over filling and culverts. Restore past impacts, such as removing obsolete impoundments and ditches in order to restore the natural hydrology. Prevent the spread of invasive exotic species into the river through appropriate direct management, and by minimizing potential dispersal corridors.

Survey for occurrences on Long Island to advance documentation and classification of tidal rivers. Inventory remaining rivers that are in good condition (A- to AB-ranked).

Freshwater tidal rivers similar to those in New York occur on the Atlantic Coastal Plain from Maine to North Carolina.

The aquatic community of continuously flooded substrates that support no emergent vegetation. Within the river there are two zones; the deepwater zone includes areas in which substrates are usually over 2 m (6 feet) deep at low tide, the shallow zone includes submerged areas less than 2 m (6 feet) deep at low tide that lack rooted aquatic vegetation. In the river there is a vertical salinity gradient, with a surface layer of fresh water (with salinity values less than 0.5 parts per thousand) floating over a deeper layer of brackish water (with salinity values between 0.5 and 18.0 parts per thousand). Salinity values at any one place in the river may fluctuate as the tides flow in and out because the "salt wedge" of brackish water alternately rises and falls with the tides (Edinger et al. 2002).

A large river, such as the Hudson River, that has a salinity gradient (i.e., very salty at the river mouth, brackish upstream, and freshwater inland), and shows evidence of two daily tides along the shoreline.

Tidal rivers are observable year round. The powerful and nourishing spring flood can be observed at snow melt in March and April. The flora on the margins of the river can be observed throughout the growing season. Ice floes that move down the channel can be seen in the winter. Bird migration is prominent along the Hudson River in April and May. 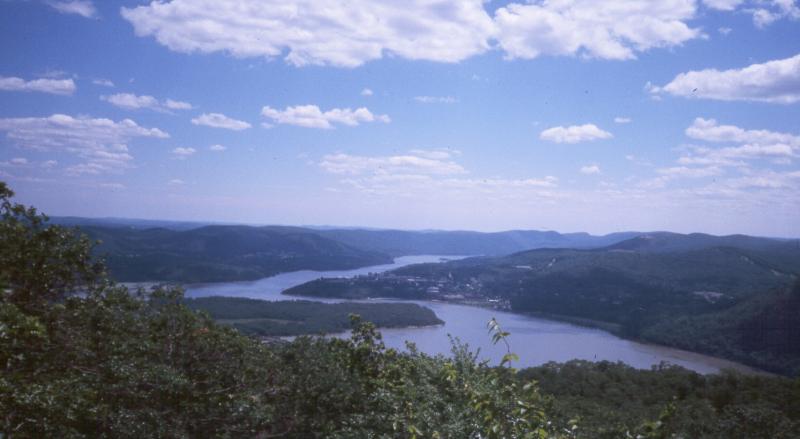 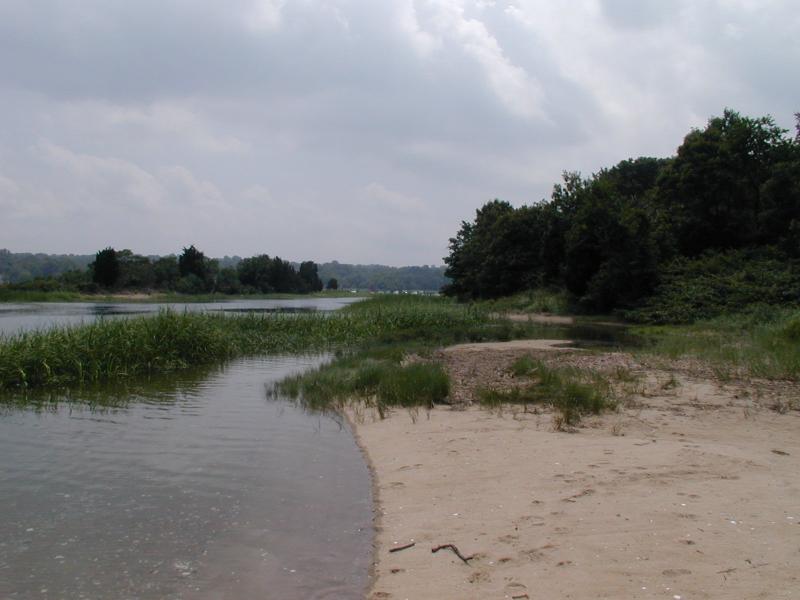 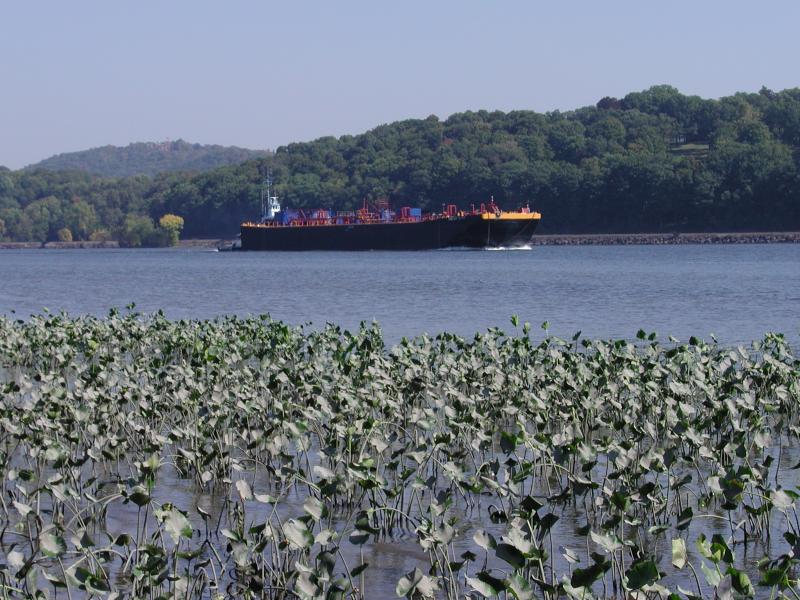 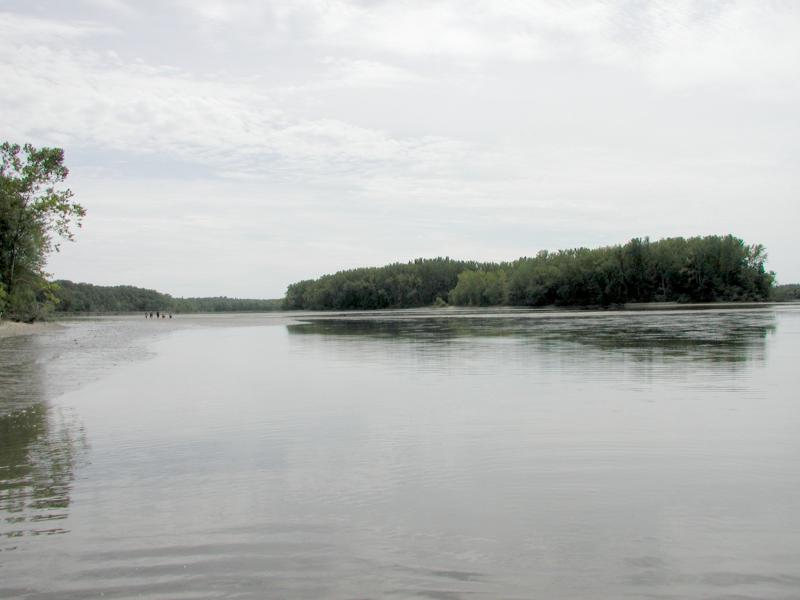 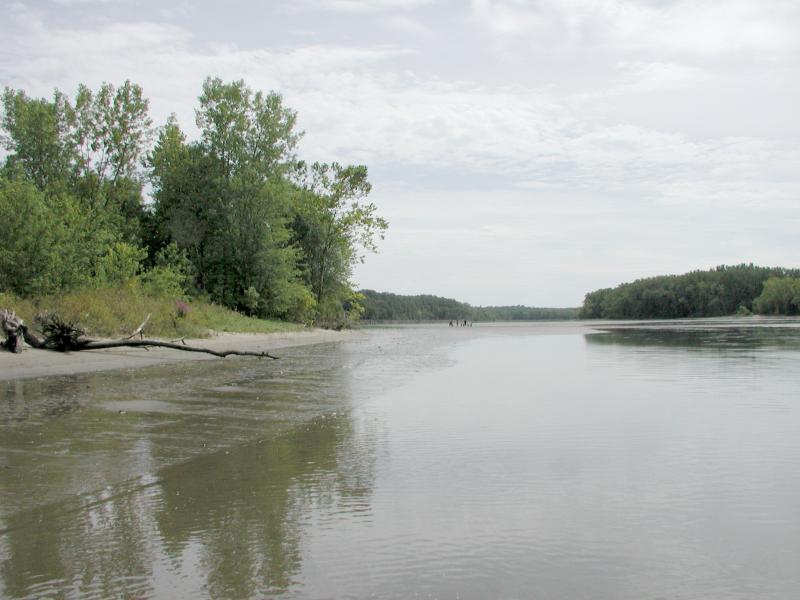 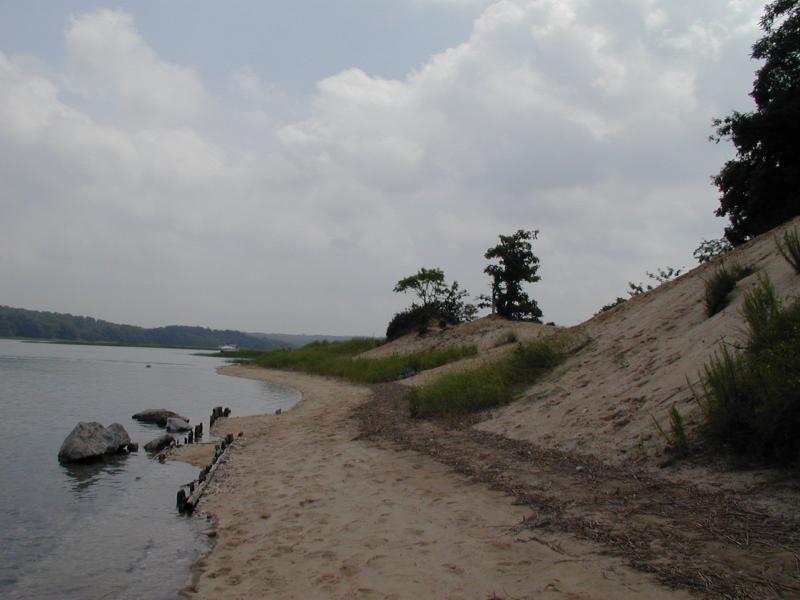 This figure helps visualize the structure and "look" or "feel" of a typical Tidal River. Each bar represents the amount of "coverage" for all the species growing at that height. Because layers overlap (shrubs may grow under trees, for example), the shaded regions can add up to more than 100%.

Boyce Thompson Institute for Plant Research. 1977. An Atlas of the Biologic Resources of the Hudson Estuary. Yonkers, New York. 104 pp.

Cole, Jonathan J., Stuart Findlay and Michael L. Pace. 1988. Basic ecosystem processes in the Hudson River: A Report of a Conference at the Institute of Ecosystem Studies, October 11 and 12, 1988. Unpublished Report.

Gladden, John B., Frank R. Cantelmo, J.M. Croom and R. Shapot. 1988. Evaluation of the Hudson River ecosystem in relation to the dynamics of the fish populations. American Fisheries Society Monograph 4: 37-52.