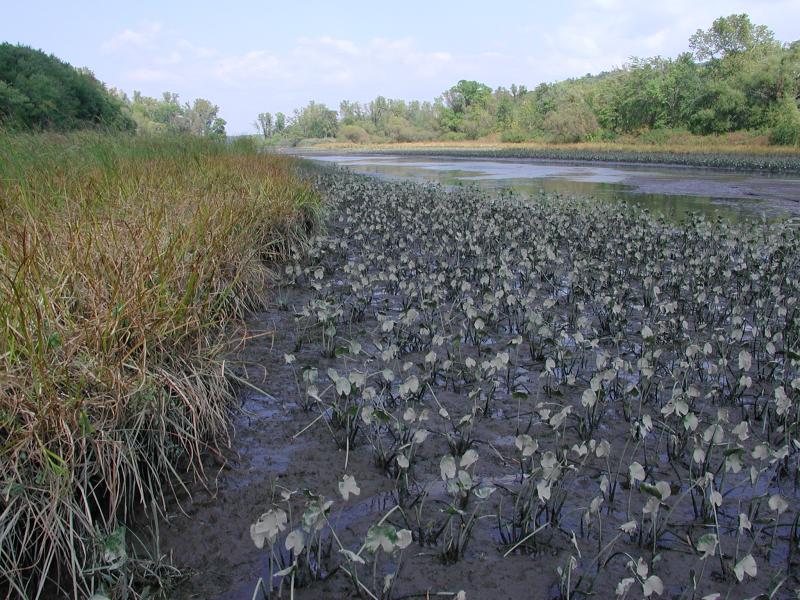 Freshwater intertidal mudflats are characterized by low-growing rosette-leaved aquatics that are adapted to the tides that flush the community daily. At low tide, the community and rosette-leaved plants are exposed. At high tide, they are completely submerged in three to four feet of water.

This community is restricted to the freshwater portion of tidal rivers. All occurrences are on the Hudson River with about 90% in Greene, Columbia, and Dutchess Counties. There are estimated to be less than 100 occurrences in the state. Several of these occurrences are threatened because of shoreline development, invasive plants, and river channel dredging.

The number of freshwater intertidal mudflats in New York have probably remained stable in recent decades as a result of wetland protection regulations.

The number of freshwater intertidal mudflats in New York have probably substantially declined (about 80%) from historical numbers likely correlated with shoreline development and river channel dredging.

The main threats to this community are shoreline development (including railroad tracks), and invasion of exotic species, such as water chestnut (Trapa natans). Recreational boat traffic that scrapes across the mudflats at high tides, and ATV and motorcycle use at low tide cause direct degradation. Dredging of shipping lanes may also pose a threat by reducing water quality and altering natural tidal regime and sediment deposition.

Maintain tidal regime in marshes cut off from the Hudson River near the railroad tracks.

Buffers that diminish or eliminate disturbances in this estuarine community are critical considerations for any development project. Such disturbances include the influx of water-borne solutes (road salt, fertilizers, herbicides, pesticides, sewage), water-borne sediments, and noise pollution. Strive to minimize or eliminate hardened shorelines and maintain very low-sloped shorelines within the tidal zone. Maintain high connectivity between the river and the mudflat to encourage full tidal flushing during each cycle of the tides. For example, barriers such as railway causeways should have numerous culverts to allow sufficient hydrologic connectivity.

This community is currently restricted to the central Hudson Valley portion of the Hudson River, ranging from Albany to Poughkeepsie, with most examples occurring in Columbia and Greene Counties. Small examples of freshwater intertidal mudflats may also occur along tidal rivers on Long Island.

A sparsely vegetated community characterized by low-growing rosette-leaved aquatics. This community occurs on exposed intertidal mudflats where the water is fresh, with salinity values below 0.5 parts per thousand (ppt). This community is best developed where mudflats are nearly level so that broad expanses are exposed at low tide. The plants are completely submerged in 0.9 to 1.2 m (3-4 feet) of water at high tide, and they are usually coated with mud.

Sparsely vegetated mudflats along tidal rivers that are exposed at low tide.

Known examples of this community have been found at elevations between -1 feet and 20 feet.

Freshwater intertidal mudflats are best observed at low tide. The characteristic rosette-leaved plants of this community are generally at their peak from mid-July through August. 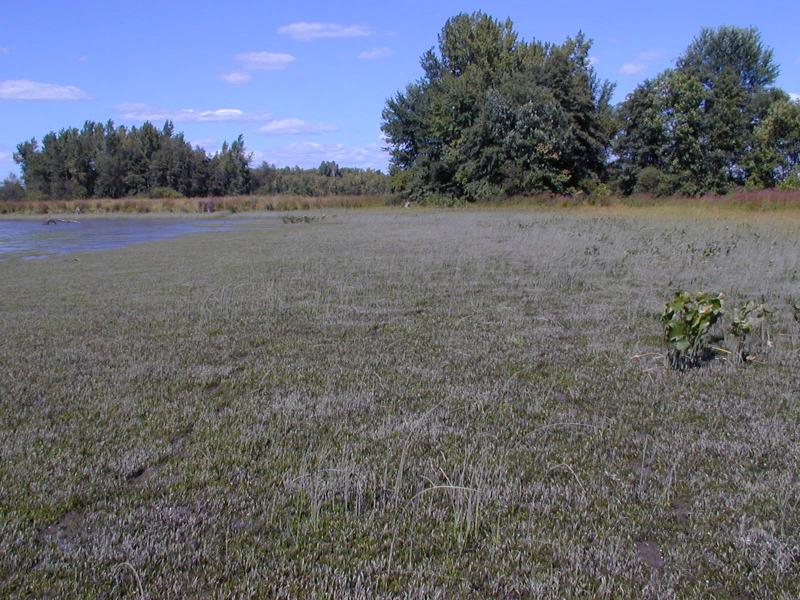 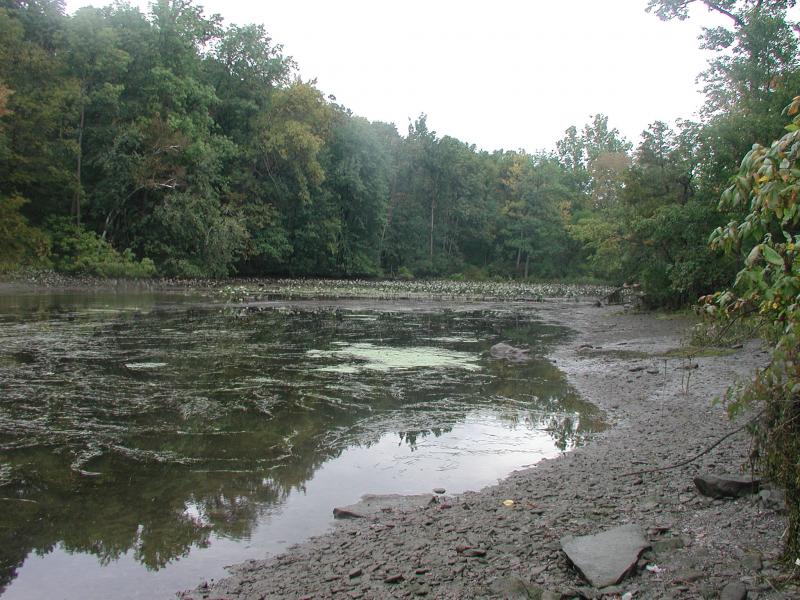 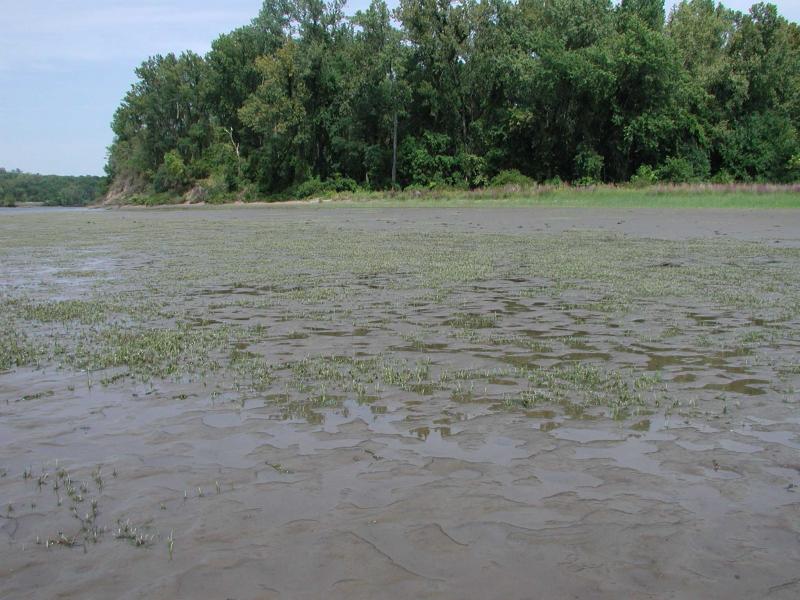 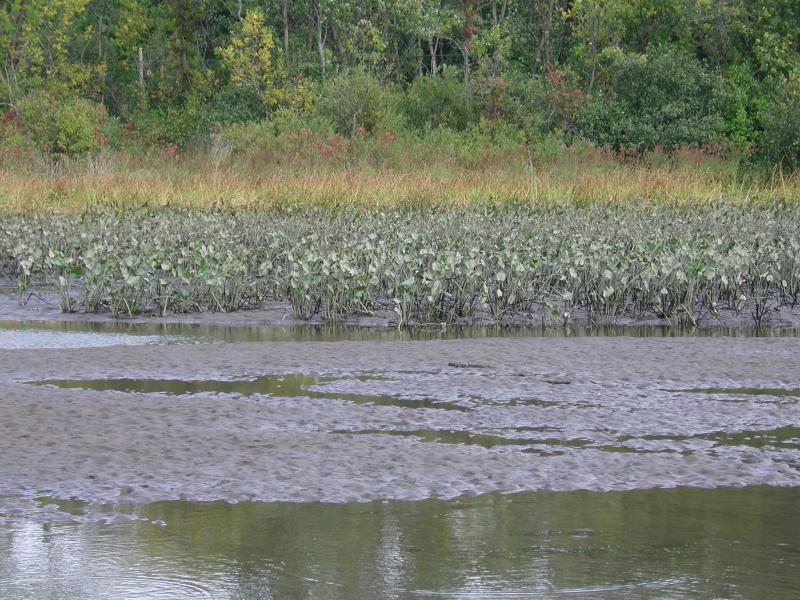 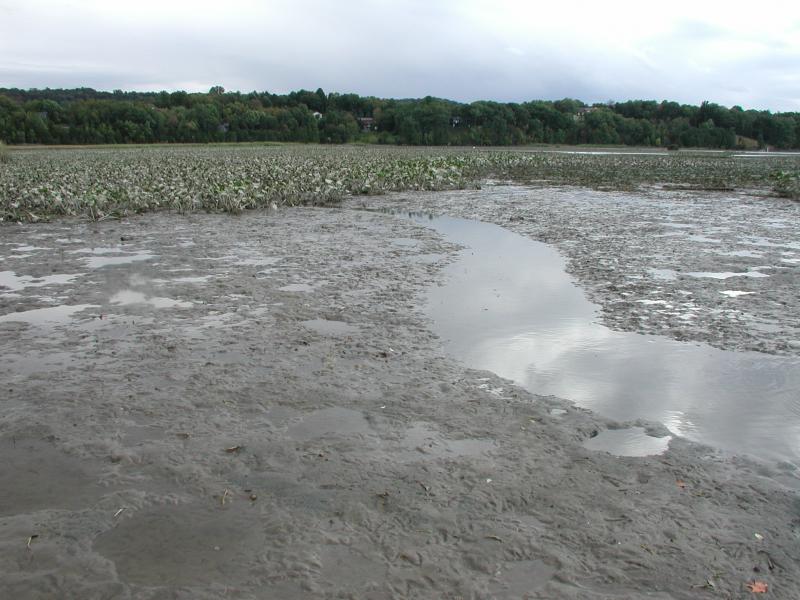 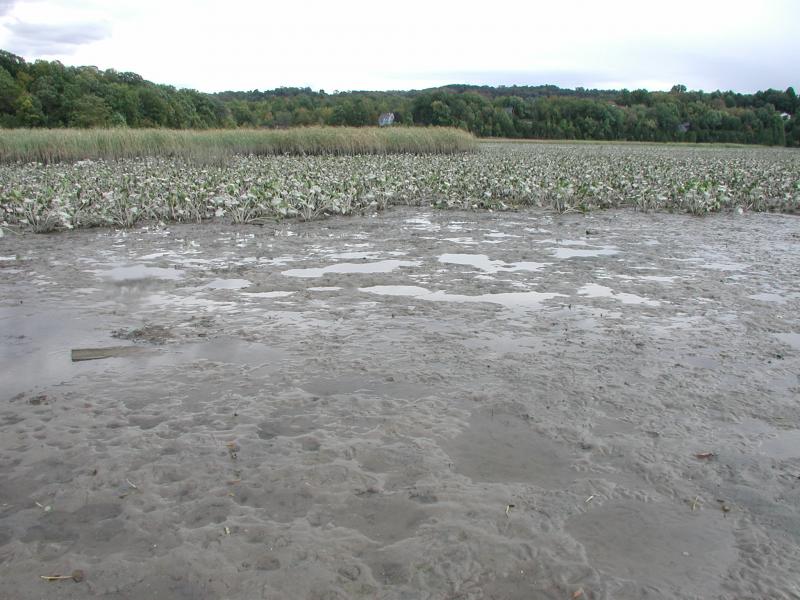 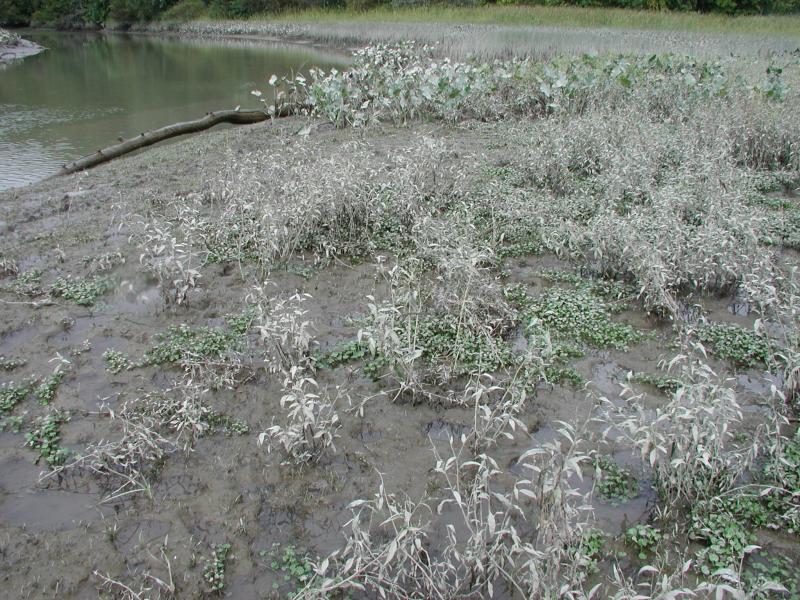 This figure helps visualize the structure and "look" or "feel" of a typical Freshwater Intertidal Mudflats. Each bar represents the amount of "coverage" for all the species growing at that height. Because layers overlap (shrubs may grow under trees, for example), the shaded regions can add up to more than 100%.