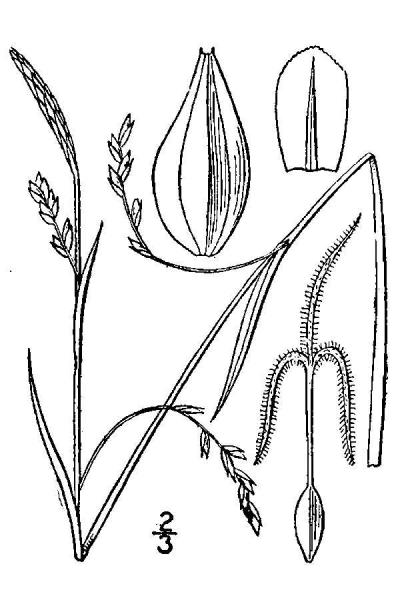 Vaginata means sheathed (Fernald 1970), which probably refers to the lower leaves which are long sheathing and lack blades. Carex vaginata is circumpolar in distribution and occurs around the world in the northern regions.

There is only a single known population with five historical locations. This is a plant of calcareous swamps, a limited and rare community type. New York is also this species' southern range limit. This sedge should be sought in other calcareous swamps similar to Bergen, Bonaparte, and Lisbon Swamps.

The one extant population has been documented since 1865. This population appears robust and healthy but there is no data indicating if this population is truly stable. There are about 4 or 5 other populations which have not been seen in at least 85 years. Dedicated surveys to these sites have not been conducted so it is unclear if these populations are still extant. Overall, long term trends are unknown.

Deer browsing is very heavy in the one known extant site but it is unclear if the deer are browsing the Carex vaginata.

At the one known extant site, deer browsing is high. Deer populations are being managed by the owner of this property and this should continue. The deer population at this site should be lowered even further than current levels.

All historical sites should be surveyed to see if C. vaginata is still extant at these sites. Additional surveys should be conducted to other likely sites, in particular rich cool northern cedar swamps.

Carex vaginata occurs at a few scattered sites in New York from southwest of Rochester to the high peaks region of the Adirondacks.

Carex vaginata is a perennial grass-like plant that occurs in patches. It has long spreading rhizomes and short strap-like leaves that are 1.5-4.0 mm wide. Stems 7-60 cm tall, are produced from the rhizomes. At the apex of the stem is a cluster of male flowers. Additionally, on the upper half of the stems are secondary stems that branch off of the main stem and have female flower/fruit clusters at their apex. Fruits (perigynia) are 3.5-5.0 mm long and have a beak at their apex which is 0.4-2.2 mm long (Rothrock and Reznicek 2002).

Carex vaginata is long rhizomatous and colonial in habit. Lower leaves are bladeless, while the upper leaves have blades which are 1.5-4.0 mm wide. Culms are 7-60 cm tall. Proximal bracts have sheaths and relatively short blades. These blades are 1-1.5 cm long. Lateral spikes are pistillate and 0.8-3.0 cm long. Pistillate scales are purple tinged. The terminal spike is staminate. Perigynia are 3.5-5.0 mm long, smooth, and have a slender beak (0.4-)0.6-1.8(-2.2) mm long (Rothrock and Reznicek 2002).

Carex vaginata is easiest to identify when its perigynia are almost mature to mature but have not shed.

Carex vaginata is in immature to mature fruit from early June through July and sometimes even later. Later in the season the perigynia are shedding making identification harder. Therefore, the best time to survey for this species is from early June till very early July.

The time of year you would expect to find Sheathed Sedge fruiting in New York.