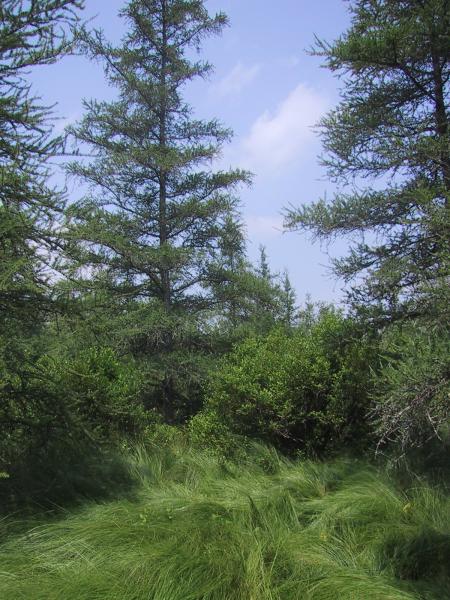 Unlike most conifers such as pine and spruce, tamarack is deciduous and loses its leaves in the fall like maples and oaks. Other conifers lose their leaves too, but in a different way. A small portion of "evergreen" leaves (needles) are shed continuously throughout the entire year, while tamaracks and other deciduous trees lose all of their leaves at once.

There are several hundred occurrences statewide. A few documented occurrences have good viability and several are protected on public land or private conservation land. This community is sparsely scattered but widespread throughout upstate New York, and includes a several large, high quality examples. The current trend of this community is probably stable for occurrences on public land, or declining slightly elsewhere due to moderate threats that include alteration of the natural hydrology (primarily by beaver) and invasive species.

The number and acreage of red maple-tamarack peat swamps in New York have probably declined slightly, or have remained stable, in recent decades as a result of wetland protection regulations. A few examples may have declined due to flooding by beaver.

The number and acreage of red maple-tamarack peat swamps in New York have probably declined substantially from historical numbers likely correlated with agricultural and other development.

Where practical, establish and maintain a natural wetland buffer to reduce storm-water, pollution, and nutrient run-off, while simultaneously capturing sediments before they reach the wetland. Buffer width should take into account the erodibility of the surrounding soils, slope steepness, and current land use. Wetlands protected under Article 24 are known as New York State "regulated" wetlands. The regulated area includes the wetlands themselves, as well as a protective buffer or "adjacent area" extending 100 feet landward of the wetland boundary (NYS DEC 1995). If possible, minimize the number and size of impervious surfaces in the surrounding landscape. Avoid habitat alteration within the wetland and surrounding landscape. For example, roads and trails should be routed around wetlands, and ideally should not pass through the buffer area. If the wetland must be crossed, then bridges and boardwalks are preferred over filling. Restore swamps affected by unnatural disturbance (e.g., remove obsolete impoundments and ditches in order to restore the natural hydrology). Prevent the spread of invasive exotic species into the wetland through appropriate direct management, and by minimizing potential dispersal corridors, such as roads.

Research composition of red maple-tamarack peat swamps statewide in order to characterize variations. Collect sufficient plot data to support the recognition of several distinct types based on composition and by ecoregion.

This community is sparsely scattered but widespread throughout upstate New York, north of the North Atlantic Coast Ecoregion. It is concentrated in the Great Lakes Ecoregion and very uncommon in the Northern Appalachians Ecoregion.

This community is limited to the Great Lakes basin and adjacent areas. This range is estimated to span north to central Ontario, west to Minnesota, southwest to northern Indiana, southeast possibly to western Massachusetts, and northeast to Newfoundland.

A swamp that occurs on organic soils (peat or muck) in poorly drained depressions. Dominant canopy trees include both conifers and deciduous species; red maple and tamarack are characteristic.

Known examples of this community have been found at elevations between 250 feet and 1,584 feet.

Tamarack and red maple are characteristic of red maple-tamarack peat swamps; their striking look is best enjoyed in the growing season from May through September. 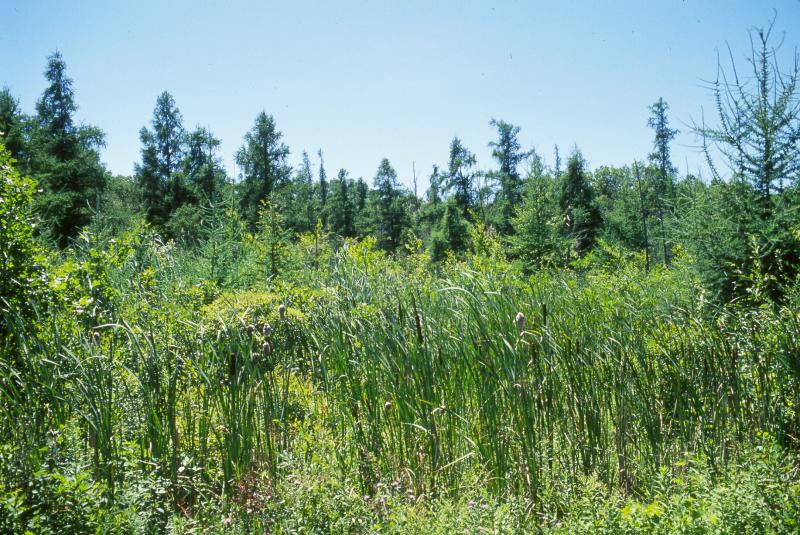 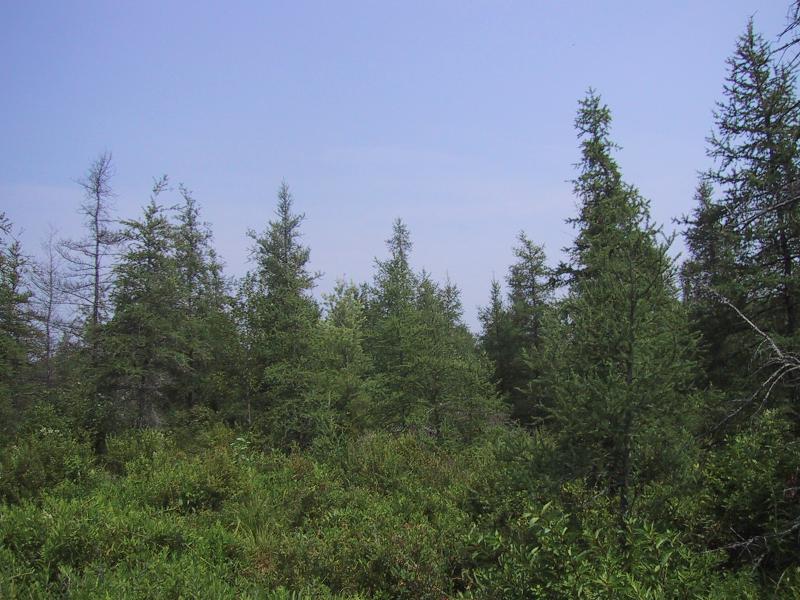 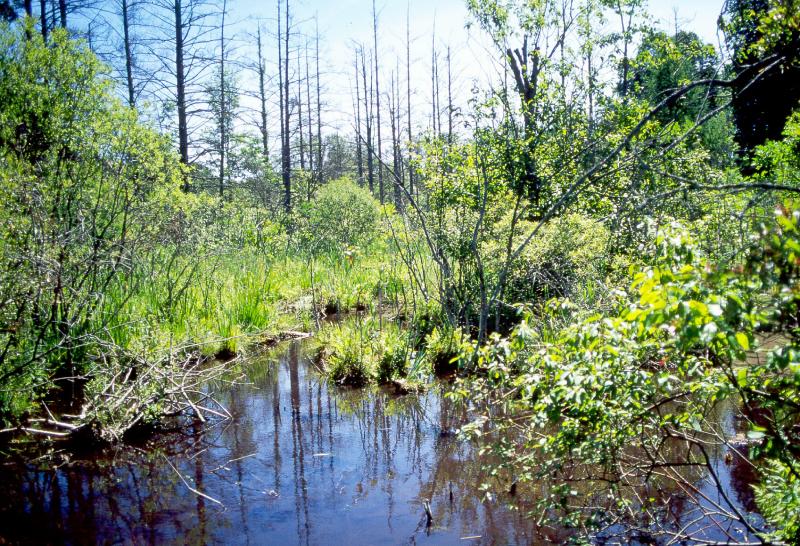 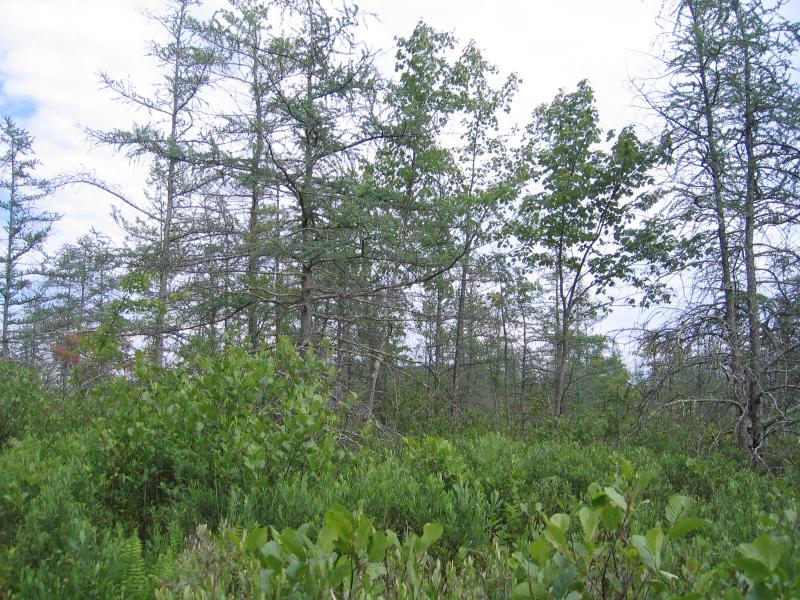 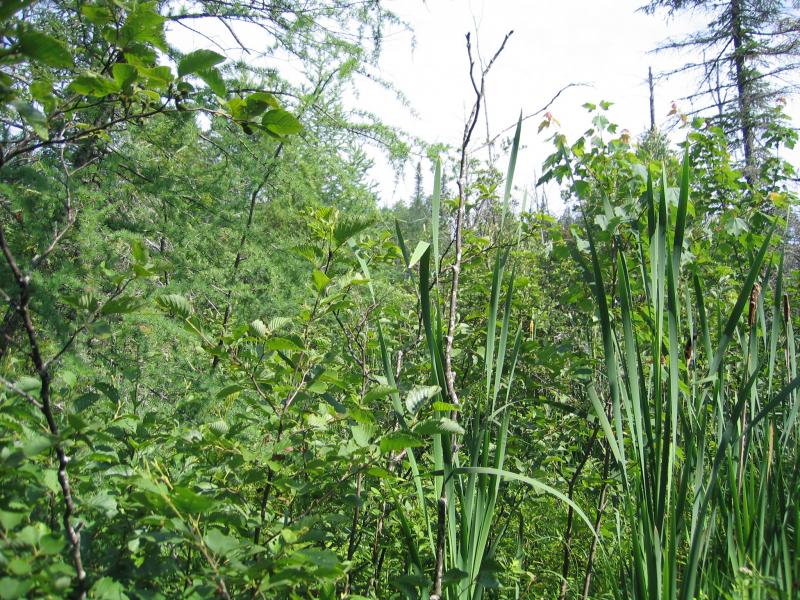 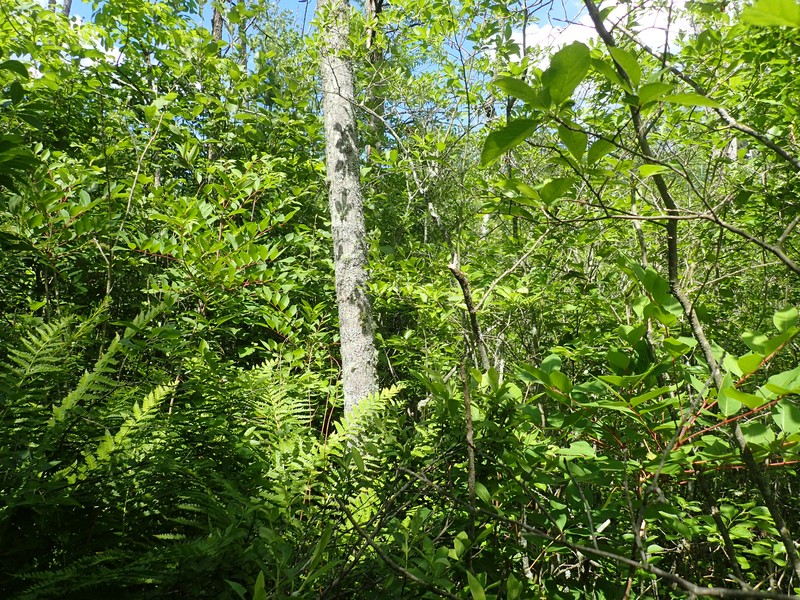 This figure helps visualize the structure and "look" or "feel" of a typical Red Maple-Tamarack Peat Swamp. Each bar represents the amount of "coverage" for all the species growing at that height. Because layers overlap (shrubs may grow under trees, for example), the shaded regions can add up to more than 100%.

Information for this guide was last updated on: June 29, 2020