This pine is named for the spiny bracts on the outside of the cones. It is well adapted to fire because its crook-shaped lower trunk sends up new shoots if the upper trunk is killed by fire (Wikipedia contributors).

There is one small existing population. There were four populations from the late 1800s that no longer exist because their habitat has been eliminated but there's still one record from 1915 on Long Island that needs to be rechecked.

The short-term trend of the existing population is apparently stable.

This plant has always been very rare but populations have been reduced from the 1800s from 5 locations to one.

Trees may be suppressed by shading from taller surrounding vegetation if open-canopied conditions are lost.

Maintain open-canopied conditions around the trees to allow the trees space to grow and reproduce.

The trees grow along the sandy trails and at the bottom of a sandy berm in wet deciduous woods (New York Natural Heritage Program 2012).

Currently this pine is only known from Staten Island. The one historical population in Suffolk County is considered extirpated. There are also a few records of planted trees in Essex and Nassau counties and unconfirmed reports from Albany and Westchester counties.

It is widespread throughout the southeastern US from New Jersey southeast to Missouri, Eastern Oklahoma and eastern Texas. It is scattered and rare from eastern Pennsylvania to Staten Island.

Shortleaf pine is a medium tall tree with a short crown. The bark is reddish-brown (almost black when young), furrowed, and broken into large, scaly plates. The twigs are pale and whitish. The needles are usually 2 per bundle but sometimes 3. They are 7.5-12 cm long, slender, soft and flexible, sharp pointed, yellowish-green to dark bluish-green. The cones are oblong and taper near the tip, 3.8-6.3 cm long and dull brown. The scales have a sharp spine in the middle. They open at maturity and persist for several years (Gleason and Cronquist 1991).

This pine can be identified at any time of the year.

Virginia pine looks very similar but its leaves are always two per bundle and 4-7 cm long (yes, shorter than those of shortleaf). The twigs are purplish brown or purplish gray waxy. The cone may be a little more reddish (Gleason and Cronquist 1991).

The trees and their persistent cones are visible any time of year.

The time of year you would expect to find Short-leaved Pine vegetative and fruiting in New York. 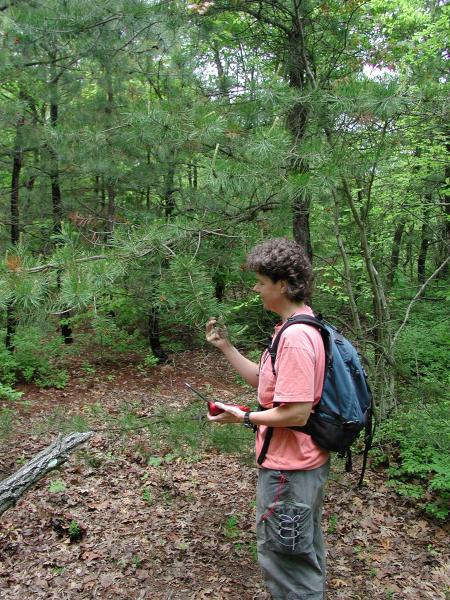 D.J. Evans next to a tree
Stephen M. Young 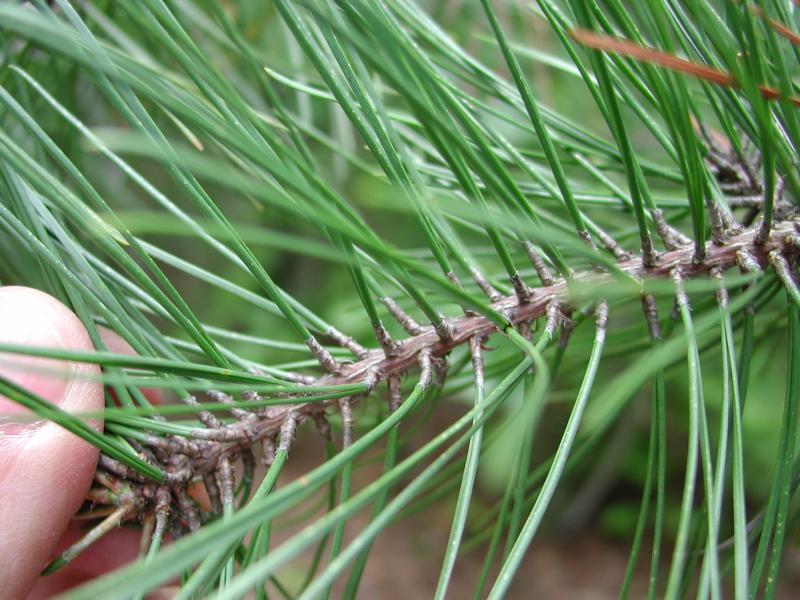