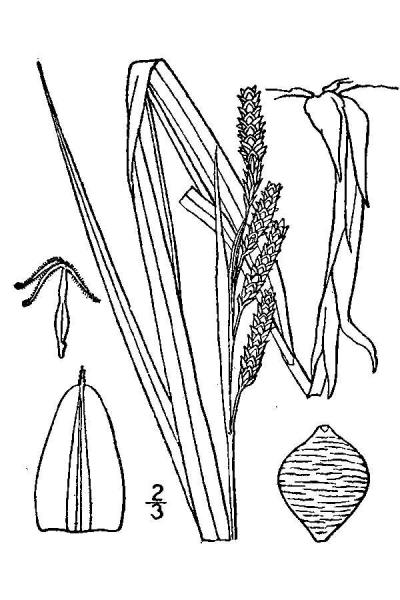 This is only known from two locations in central New York, and there is also a third historical location from Long Island. This sedge's native status within New York may be questioned. The two known locations in central New York were first observed in the 1990s. There is speculation these may have arrived within agricultural seed or hay as this species in relatively common in the Ohio River Valley. There is no concert evidence either way to support a native or non-native conclusion. To be conservative and knowing that it is native to Ohio and Pennsylvania, it is being treated as a native species within New York. The populations within New York are small and unprotected. Better management is needed to protect this species and more surveys targetting this species should be conducted throughout central and western New York.

This species was recently discovered at two sites in NY. It was either overlooked at these sites in the past or perhaps has recently been introduced at these locales. One of these sites has only been surveyed once. The other site has been documented to be extant over a three year period but trends are not known. Therefore, it is unknown what the short term trends are for this species.

There is one historical site in New York which has not been seen in over 100 years. The specimen documenting this occurrence needs to be verified. No surveys have been done to this historical site and it is unknown if it is still extant. The two extant sites are both recent discoveries and may be due to the species being overlook or due to a recent introduction. Therefore long term trends are unclear but may indicate this species has been increasing.

The voucher for the Suffolk County report needs to be verified.

Carex shortiana is a species of the Midwest. It is common in the western part of its range especially in the Ohio River Valley. It occurs from NY west to Ontario, Indiana, Iowa, and Kansas south to Virginia, Tennessee, Arkansas, and Oklahoma (New York Natural Heritage Program 2006, Cochrane 2002).

Carex shortiana is a perennial, tufted grass like plant. It has long strap like leaves that are 4-9 mm wide. Arising from the leaves at the base of the plants are stems that are 30-90 cm long. On these stems are leaves that are usually longer than the stems. Secondary branches with erect cylindrical flower/fruit clusters, 1 to 4 cm long, occur on the upper part of the stems. The fruits (perigynia) are 2-2.6 mm long, wrinkled, and densely crowded in each cluster (Cochrane 2002).

Carex shortiana is a cespitose perennial. Leaves are glabrous and 4-9 mm wide. Culms are 30-90 cm tall and have (3-)4-6 spikes. Spikes are all usually gynecandrous (or sometimes the lateral are entirely pistillate), cylindric, and 1-4 cm long. The lowest is separated from the others by a long internode. It has an elongate peduncle. Further up the culm the spikes become subsessile to short pedunculate. Perigynia are olive green to brown, dorsally flattened, transversely wrinkled, have only 2 veins, and are 2-2.6 mm long. The perigynia abruptly taper to a 0.2 mm long, bent beak. There are 3 stigmas and the achenes are trigonous (Cochrane 2002).

It is easiest to identify this species when it is in just immature to mature fruit but the perigynia are not yet shedding heavily.

This is a unique sedge within its own section. The three stigmas and trigonous achenes along with the spikes usually all being gynecandrous is distinctive.

The time of year you would expect to find Short's Sedge fruiting in New York.