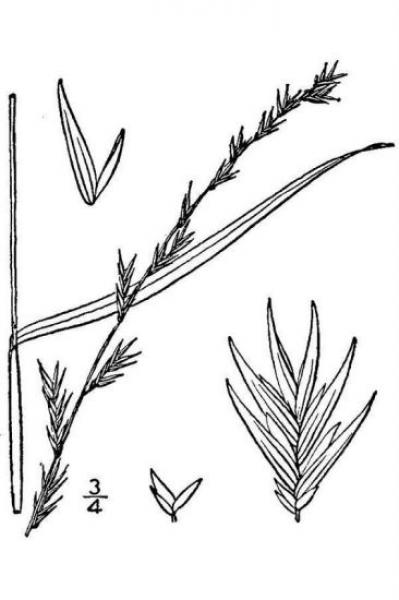 This grass had only been collected a few times in New York before the last collection in September of 1936 from Valley Stream on Long Island. Then in 1996, exactly 60 years later to the month, it was rediscovered in Eastern Long Island during a natural community inventory by New York Natural Heritage botanists Greg Edinger and David Hunt. Their discovery is still the only known occurrence in the state.

There is one existing population which was discovered in 1996. There are two historical populations known from the 1800s and early 1900s which have been surveyed but no plants were found. Three additional populations from western Long Island are considered extirpated.

The only existing population has been surveyed only once so short-term trends are unknown.

This plant was always very rare in New York but none of the old records have been rediscovered and only two small clumps presently survive.

The incursion of Phragmites into this plant's wetland habitat is a threat as well as the direct disturbance of the wetlands through ditching.

The population needs to be protected from direct disturbance and from the invasion of Phragmites.

Research is needed on how to augment and protect the existing population.

The only extant population of Chasmanthium laxum in New York was found in an intact Red Maple-Black Gum swamp, though historically the species has also been reported from bogs (New York Natural Heritage Program 2010). Moist sandy soils of the coastal plain (Rhoads and Block 2000). Woods, meadows and swamps (Fernald 1970).

This grass ranges from Long Island to New Jersey and eastern Pennsylvania south through the eastern states to Florida and west through Virginia, Kentucky, Missouri, and Arkansas to Eastern Texas.

Dune Sandspur is a perennial grass species with unbranched stems 40 to 130 cm tall. The leaves extend halfway up the stem, and are glabrous with blades 15-35 cm long and 3-8 mm wide. The spikelets disarticulate below the glumes, and are strongly laterally compressed (keeled), 5 to 8 mm long and 2 to 6 mm wide, each with 3 to 5 flowers, the bottom 1 or 2 sterile (FNA 2003, Gleason and Cronquist 1991).

Specimens with mature fruit are needed for identification.

Slender Spikegrass is the only species of its genus native to New York, and its laterally compressed spikelets on unbranched stems are distinctive. Chasmanthium latifolium, with broader leaves and larger, drooping spikelets, is sometimes planted as an ornamental species.

The time of year you would expect to find Slender Spike Grass flowering and fruiting in New York.