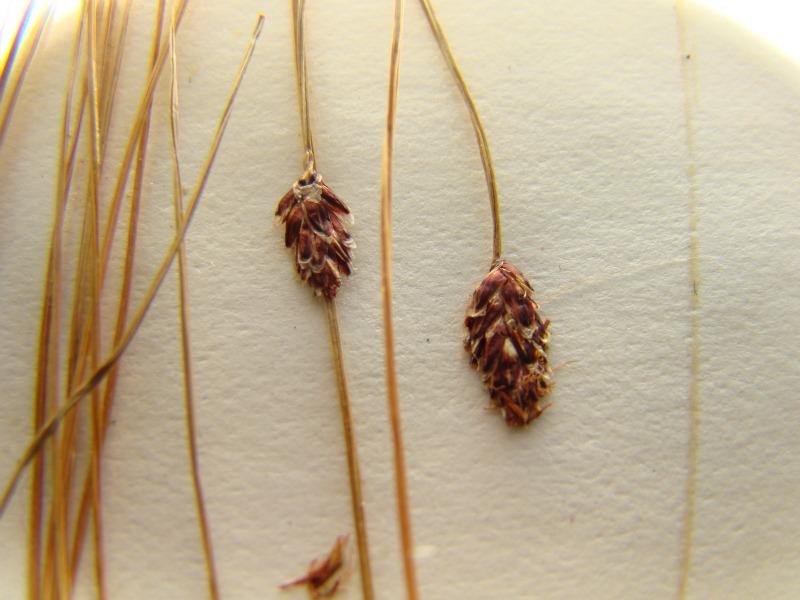 In Quebec this species is known as winged-stem spike-rush because the stems are deeply grooved and thus " falsely winged" (the meaning of pseudoptera) (Flora of North America Editorial Committee 2002).

There are five existing populations, most of them of good quality and in protected areas. There are 12 records from the late 1800s through 1974 that have not been rechecked.

Three of the five populations have been rechecked at least once and numbers remain about the same.

This plant has always been very rare in New York and populations remain at a low level. Old records have not been rechecked so long-term trends are unclear.

Exact threats are unknown at this time.

No management is needed until more study is done of the sites where it occurs.

More survey work is needed to determine the exact range of this species and the habitat it prefers.

There are two New York sites for Slender Spikerush with known habitat information; one is a have been described; one was wet, clayey oldfield, and the other a mowed roadside in a wet pine barrens. More information on the habitat requirements of Slender Spikerush in New York is needed (New York Natural Heritage Program 2010). Wet, fresh, often calcareous meadows, swales, springy places, woods, prairie, serpentine barrens, ditches (FNA 2002). Wet places (Gleason & Cronquist 1991).

This spikerush is currently known from Suffolk County on Long Island and in the Bronx. It has been extirpated from Queens and was also historically known from Lake Carmel in Putnam County.

This spikerush occurs mostly east of the Mississippi, from Québec and Nova Scotia and south to Georgia in the east, and from Indiana south to Louisiana in the west.

Spikerushes consist of a simple stem (the leaves bladeless and inconspicuous), with the infloresence a solitary, many-scaled spikelet at the top of the stem. The perianth (sepals and petals), if present, is reduced to bristles. The base of the style is expanded into a tubercle, and is usually persistent on the fruit (achenes). Slender Spikerush is a perennial, mat-forming species, growing from rhizomes. Its stems have 4 to 5 sharp angles, and the leaf sheaths are reddish at the base and toothed at the apex. Some or all of the upper leaf sheaths have a stout apical tooth 0.4-0.6 (0.9)mm tall. The spikelets are egg-shaped and 3-6 millimeters long and 1.5 to 2 mm wide. There may be 1 to 3 slender bristles, as long or shorter than the achenes. The achenes are trigonous, yellow, angled, and wrinkled (under 10 -20x magnification) with 10 to 14 depressions in each vertical row. The flower scales persist on the spikelet at least until the achenes fall (FNA 2002).

Mature fruit is necessary for identification.

Eleocharis tenuis var. tenuis is also found in New York. It has smooth to bluntly angled stems 0.5 millimeters or less wide. The upper leaf sheaths have a slender apical tooth to 0.2mm tall. The green to brown achenes have tubercles as high as they are wide.

Eleocharis elliptica has stems with (4) 6-8 angles, not sharply winged, or sometimes rounded or compressed. the yellow to yellow-orange achenes are persistent after the scales fall, and have 12 to 20 horizontal ridges per vertical row (FNA 2002).

Fruits are present from July through mid-October.

The time of year you would expect to find Sharp-angled Spike Rush fruiting in New York. 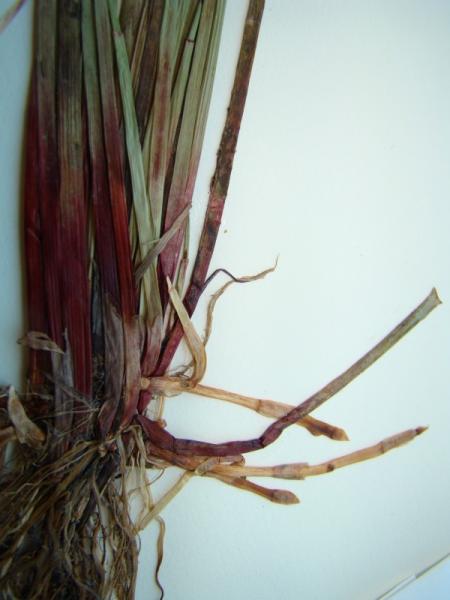 Information for this guide was last updated on: July 8, 2021