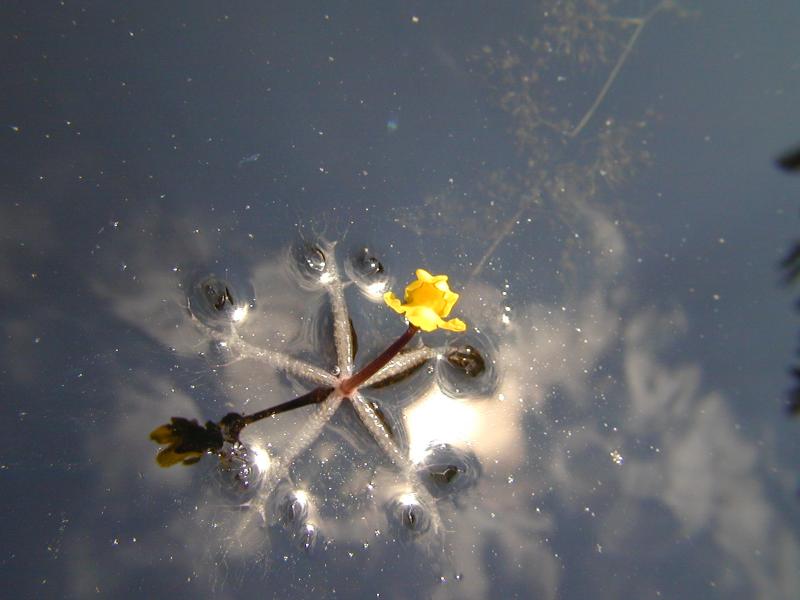 This is one of the few plants in the state where there are fewer historical records than existing populations. Once targeted surveys got underway in the 1980s many new populations were found. The genus name means little bladder while the species name comes from the floating leaves which radiate in all directions (Fernald, 1970).

This is one of the few species that has more current populations than historical records and seems to be expanding its numbers in the state. Climate change may make more water bodies available for colonization.

Invasive aquatic plants like Cabomba, fan-wort, and Myriophyllum spicatum, Eurasian water milfoil, could outcompete this species. The use of copper sulfate could kill plants. When the ponds are dried out improper use by ATVs, horses and people fishing could damage plants.

Research is needed to determine how populations are being affected by invasive aquatic plants. More frequent monitoring of ponds could show how populations fluctuate from year-to-year. Surveys of ponds north of its range could determine if it is expanding northward as climate changes.

In New York most sites for this species are small, shallow ponds, often surrounded by pine barrens. However it also has been discovered in artificial pools, gravel pits, and beaver ponds, including some sites that are eutrifying and/or dominated by exotics (New York Natural Heritage Program 2007). Ponds and sluggish waters (Fernald 1970). In ponds along or near coastal plain (Gleason & Cronquist 1991). Ponds, lakes, swamps, and drainage ditches (Garrett et al 2000).

Nearly all the historical records for this species are from Long Island, but in the last 20 years it has been discovered in Orange, Westchester, and Hamilton Counties as well.

Utricularia radiata ranges along the Atlantic Coast from Nova Scotia and New Brunswick south to Florida, and further inland south and west from Georgia and Tennesse to Texas, Oklahoma, and Arkansas. It is also disjunct to Indiana.

Utricularia radiata is a floating-leaved aquatic plant, carnivorous by means of the tiny bladders which the genus is named for. The plants do not root at all, but float or hang suspended in the water column (collapsing into an unruly tangle in one's hand when lifted out of the water). There are two quite different types of leaves. The lower leaves are alternate, up to 3 cm long, and divided many times into hair-like segments, each bearing many tiny bladders. The upper leaves immediately below the flowering stem are in whorls of 4-7, 1-4 cm long, and obviously inflated, and serve as "floats" so that the infloresence rides above the water surface. The flowers are yellow and 2-lipped, the lower lip 3-lobed, and occur on erect stalks in groups of (1) 3-4 (5) (Garrett et al 2000).

This species is most easily identified when in flower.

Utricularia inflata is the only other species of bladderwort in New York with inflated whorls of leaves. It is a larger or more robust plant in most respects. The floats (pedicels) are 3-8 cm long, there are (3) 9-14 (18) flowers per infloresence, and the flowering stalk bends downward.

The time of year you would expect to find Small Swollen Bladderwort vegetative and flowering in New York. 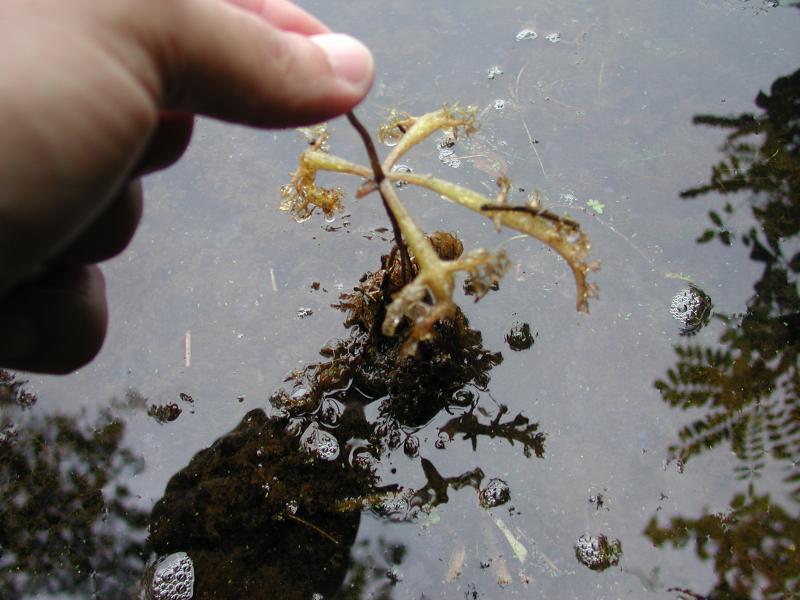