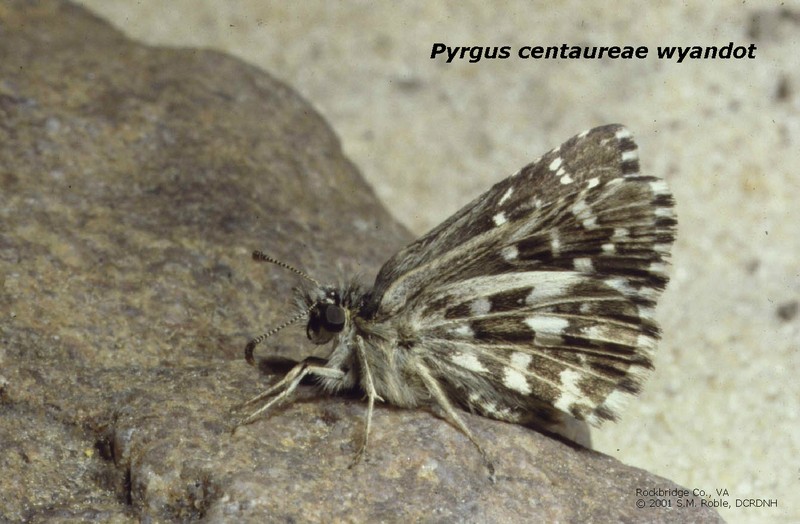 The southern grizzled skipper is univoltine. This means that is only produces one generation per year.

Signifigant declines have occured in response to spraying for insect pests such as the spongy moth. The species is apparently gone from the two New York sites documented in the 1970s. No extant occurrences are currently documented.

The species is considered historical within New York State. It was historically known from the state but has not been verified for an extended time period, more than 15 years. The last recorded sighting was in May of 1970 and more recent surveys (1980s) have not documented individuals at previous locations. Habitat degradation is one of the largest threats to the survival of the southern grizzled skipper. The main threat is spongy moth spraying, however human development is reducing the amount available habitat for this species (Schweitzer 2011).

The larvae are found in open, exposed microclimates and forest types which are also highly susceptible to spongy moth infestation (Schweitzer 2011). As a result, it is possible that they have suffered large declines due to the spraying of Dimlin and BTK for spongy moth control. Loss of habitat due to human development is another potential threat.

Spraying for spongy moths is not compatible with existing occurances of this species. Insecticides should be avoided when possible, especially if rare species are present. If the use of insecticides cannot be avoided, consistent monitoring of rare species and timing can result in successful elimination of the target pest without eliminating the rare species.

Controlling herbivory of the main foodplant Potentilla canadensis, Candian cinquefoil, is preferable. Invasive plants should also be controlled, they outcompete the native host food plant (Schweitzer 2011). A few historical sites were pastures, so grazing might be a potential managment tool.

Development and succession should be reduced near known sites of this species. Clustered colonies should be encouraged. The colonies should be close enough so that females can move to new or vacant areas. Some amount of prescribed burning coupled with high amount of unburned refuge might be beneficial to reduce forest succession and provide habitat (Schweitzer 2011).

Additional guidance is needed to locate areas of appropriate habitat. This guidance could be used to indicate potential new survey locations within New York State.

As recently as the 1960s disjunct populations have been found in northern New Jersey and Tompkins and Tioga counties in New York.

The original range was much larger and more discontinuous than the current range which is a small narrow area of shale ridges from south-central Pennsylvania into Virginia and isolated occurrences in Ohio. The core of the range was the shale region from about Huntington County, Pennsylvania southwest though northeastern West Virginia and adjacent Virginia, including a bit of far western Maryland. These populations reached east, not exclusively on shale, to Lancaster and Dauphin Counties, Pennsylvania in the 1950s and Washington, D.C. in the 1880s (specimen from Rock Creek Park in Academy of Natural Sciences). There are no gaps more than two counties wide from Dauphin County and D.C. to extreme southwest Virginia and (LeGran and Howard, 2008) adjacent North Carolina. There were also a few seemingly isolated records in the early 1970s for central New York which could have been an extension of the main range. There were disjunct well known populations in the trap rock glades region and surrounding areas in northern New Jersey (specimens from seven counties, Iftner and Wright, 1996) and immediately adjacent New York into the late 1950s. There are or were several apparently disjunct populations in southern Ohio and a separate and distinctive group of populations in northern Michigan. Minnesota populations should be referred to the taxon freija. The pre-1863 Long Island record was probably in error for a nearby part of New Jersey or New York since no likely edaphic formations occur on Long Island. The Cook Co., Illinois dot shown by Parshall (2002) is very dubious and has generally been ignored. This also seems to date from around 1900 or earlier and collectors were often sloppy with data in those days. Information on the three reports along Lake Erie in New York and Ohio (Parshall, 2002, Shapiro, 1974) is unavailable. Aside from omitting the seven New Jersey counties, the map in Parshall (2002) seems to be the most complete compilation. The Kentucky record was probably false.

This is a small species of blackish/brown skipper (20-28 mm). It has two irregular bands of white spots on the forewing. The hindwing has two rows of partly diffused, white patches. The body and inner third of the the upper wing surface is covered with long, bluish hairs. The underside is olive colored with two and partially a third irregular white bands of zigzag blotches crossing the hindwing (Parshall 2002, Allen 1997). The fringes of the wing margin are boldly checkered.

The larvae are greenish-white with black heads. Shapiro identifed P. centaureae wyandot from other species of skipper based on the differences in genitalia described by Warren in 1924 (Parshall 2002).

Southern grizzled skipper may be distinguished from other species Pyrgus based on differences in the adult appearance, reproductive structures, and habitat preferences (Schweitzer 2011, Parshall 2002, Allen 1998). While many of the species of skippers prefer subarctic, alpine habitats, the southern grizzled skipper may be found in much hotter microclimates (Schweitzer 2011).

This species of butterfly flies low over vegetation at a height of about 1 meter off the ground. It has quick darting flight. The color and wing markings of this species make it difficult to distinguish from the background environment. When disturbed, it will fly into nearby forest or fly a short distance before landing on the ground. The wing marking of this species make it nearly impossible to find it within its surroundings. When at rest or nectaring, it holds its wings horizontal to the surface it has landed on. The larvae take shelter during the day and actively feed at night.

The species is present April 29th though the first week of May. Adults are visible in May.

The time of year you would expect to find Southern Grizzled Skipper present, active, larvae present and active, and pupae or prepupae present in New York.

Allen, T. 1997. The Butterflies of West Virginia and their Caterpillars. University of Pittsburgh Press, Pittsburgh, PA.

This guide was authored by: Colleen M. Lutz