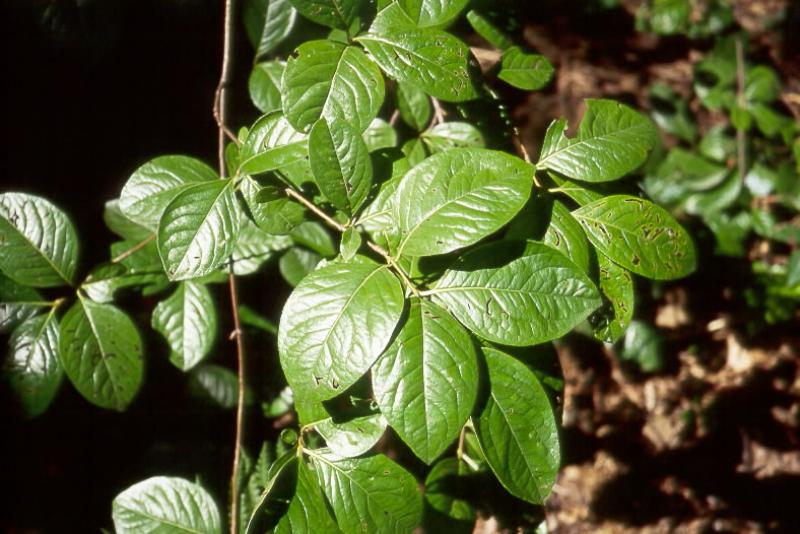 This beautiful shrub was introduced into cultivation as early as 1752 and has been grown in temperatures as low as -25 degrees F (Dirr 1975) even though in New York it is mostly native to southeastern New York, Staten Island, and Long Island where it rarely, if ever, gets that cold.

There are four existing populations but only one of them has more than 100 plants. The other ones have less than 10 each. There are two historical occurrences which need more checking but are probably gone.

The short-term trend appears somewhat negative. Some of the small populations have not been seen again and may have disappeared.

The long-term trend is apparently negative. This species has always been very rare in New York and populations remain at low levels.

Development of a hotel complex has threatened one population but the remaining populations have remained stable.

Avoid disturbance of the wetland habitat.

Research is needed to see if present populations can be augmented where they exist.

This shrub is currently known from Suffolk County, Long Island and from Staten Island. It has historical records in a nearby Nassau County and is considered extirpated from Queens, Brooklyn, and Westchester County to the west and north.

This is a shrub of the Northeastern, Southeastern, and the South-Central US. It reaches its northeastern range limit in New York, Connecticut and Rhode Island and its southeastern limit in East Texas.

Possum-haw is a shrub that grows to 4 meters tall. The opposite, petiolate leaves are mostly elliptic or oblong to oblong-lanceolate in shape with smooth margins that can sometimes be a little wavy. The tip and base are acute. They are shiny on the upper surface and very veiny on the lower surface. The winter buds are reddish brown to gray-brown. The ultimate flower cluster peduncles average 3.5 cm long when in flower. The pink fruits mature to a blue color. The stone of the fruit is round-obovate and the pulp is usually bitter-tasting (Gleason and Cronquist 1991).

This shrub can be identified vegetatively but is best identified in flower and/or fruit.

Northern wild-raisin, Viburnum nudum var. cassinoides, looks very similar and sometimes overlaps in range but its leaves are dull and not shiny on the top and the veins are not as distinct underneath. The margins have low rounded teeth. The winter buds are yellow-brown or golden. The ultimate flower cluster peduncles average 1.3 cm long when in flower. The stone in the fruit is elliptic or oblong-elliptic and the pulp is sweet (Gleason and Cronquist 1991). Silky Dogwood, Cornus amomum, may also look similar but the leaf venation in dogwoods is arcuate and not the straighter pinnate veins of Viburnum.

This plant flowers in June through July. Fruits persist through October.

The time of year you would expect to find Southern Wild Raisin vegetative, flowering, and fruiting in New York.