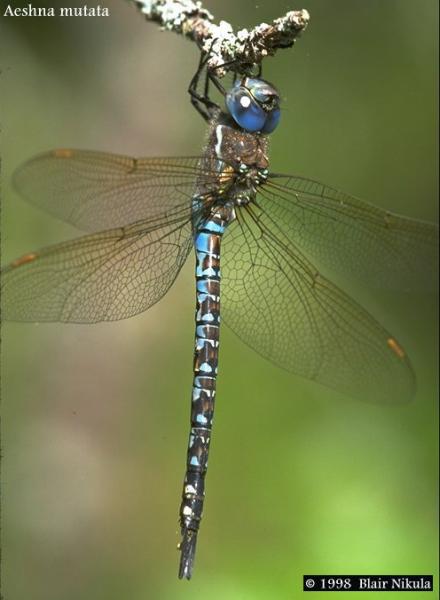 The bright sky-blue eyes of the spatterdock darner distinguish it from all similar darners in the eastern states, but the closely related blue-eyed darner (Aeshna multicolor), found in the western states, is nearly identical.

To date, this species has been recorded from just 15 localities in the state. The distribution of these records is widespread and the species' principal habitat, vegetated ponds, pools and bogs (Nikula et al. 2003, Dunkle 2000), is also widespread, but localized. These considerations suggest that existing collection locations are not an accurate representation of the actual number of populations. However, the species is thought to be fairly local in New York and other states, and the apparent preference for fishless ponds with spatterdock may also indicate that the number of undiscovered populations may not be large. It is likely that there are particular qualities such as water depth, bottom substrate type, amount and type of aquatic vegetation, pH, and the absence of certain types of fish, that make some lakes and ponds suitable while others are not suitable. In addition, there are a number of actual or potential threats to the types of waters occupied by this species.

There is no information on population trends for this species at known locations, as a number of sites have only recently been discovered while some older sites have not been visited in recent years.

There is no information on population trends for this species, although it seems likely that at least some occupied sites are being lost due to changes in hydrology and water quality at some lakes and ponds across the species' state range.

Little published information is available citing specific cases of negative impacts to this species or other lake-dwelling odonates, but any activities that degrade the sensitive hydrology of these habitats would threaten populations of these species. Examples include eutrophication and changes in dissolved oxygen content, direct effects of pesticides (e.g. for mosquito control or from agricultural runoff), increases in the sediment load of the lake (such as might result from agricultural runoff or removal of vegetation from the adjacent uplands), chemical contamination by runoff of agricultural or other discharge, and acidification of lakes by airborne industrial emissions. Groundwater withdrawal is also a likely threat at suitable sites on Long Island. Removal of large areas of forest or shrub habitats adjacent to occupied lakes and ponds could also threaten populations, as these adjacent habitats are important for recently emerged adults until they reach maturity.

Research aimed at obtaining information on population size at occupied sites would be useful in determining the overall population for this species in the state. Research on larval habitat requirements may provide a better understanding of why the species is uncommon.

The habitat of this pond/lake species has been described as "fishless ponds, usually with water lilies" (Dunkle 2000) or "vegetated ponds and pools, open marshes and bogs, often with spatterdock" (Nikula et al. 2003). Most New York locations are small ponds with abundant vegetation, including spatterdock. One New York location is better described as a bog, the Long Island location (which may not be the breeding habitat) is a coastal plain pond, and spatterdock is almost entirely absent at another location. There is a lack of information on whether New York sites for this species are fishless or not (New York Natural Program 2006).

This species has been recorded from just 15 locations in New York. These records come from nine counties in various regions of the state including the southern tier, southern Catskills, southern Hudson Valley, and Long Island. The wide distribution of these counties suggests that the species is likely to occur in other counties in these regions of the state. However, as in other portions of the species' range, it is expected that this darner will be spotty, or local, in its distribution and a large number of populations will not be found.

This species is uncommon and local within a range restricted to the northeastern United States and southern Ontario. Specifically, the range extends from Maine and southern Ontario, south and west to southern Michigan, southeastern Wisconsin, eastern Illinois, Kentucky, and northern Tennessee, and east to northern Virginia and New England (Dunkle 2000).

Like other blue or mosaic darners (genus Aeshna), adult spatterdock darners are large dragonflies with large eyes, a brown thorax with two blue stripes on the front and two on the side, and a long slender brown abdomen marked by two rows of sky blue spots. Unlike other species of Aeshna, the eyes of this species are bright blue, and males have peculiar-shaped, forked terminal appendages. Adult spatterdock darners average approximately 2.8 in (7.1 cm) in length. The wings are clear. Females are similar to males, but the thoracic markings are generally more dull, and the occasional female has yellowish thoracic stripes and greenish abdominal spots (Nikula et al. 2003, Dunkle 2000). The larvae are elongate, cylindrical-shaped aquatic insects that are usually patterned in drab brown and greenish colors. They climb and crawl among aquatic vegetation. The antennae are composed of seven small, slender segments. Body length is approximately 1.4 in (36 mm) at maturity (Walker 1958), which may be at 1-3 years.

Close examination of the thoracic pattern is helpful in identification, although the eye color and, for males, the shape of the terminal appendages, are conclusive.

Adults hunt along forest edges, dirt roads, and fields, often in the vicinity of the wetland where eggs are laid. Females lay their eggs, on the undersides of aquatic and emergent vegetation, especially spatterdock (Nuphar). Males chase other males and patrol for females while flying low along the wetland shoreline or over the open water, often with a leisurely erratic flight. As with other darners, spatterdock darners rest by hanging verticallyon tree trunks or branches where they can be difficult to detect (Nikula et al. 2003, Dunkle 2000).

The time of year you would expect to find Spatterdock Darner present and reproducing in New York.

Information for this guide was last updated on: March 31, 2006