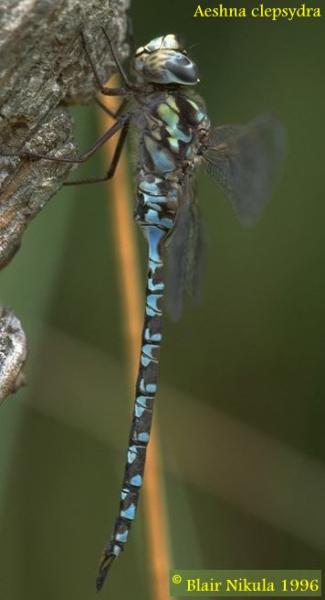 The very constricted abdomen is due to the hourglass shape of the third abdominal segment that gives this species its name. The specific name, clepsydra, comes from the Greek word klepsydra meaning water clock or hourglass.

The distribution of state records is widespread and the species principal habitat, small lakes and embayments on larger lakes with marshy or boggy edges (Dunkle 2000), is also widespread, but localized. These considerations suggest that existing collection locations are not an accurate representation of the actual number of populations. However, the species is thought to be fairly local in New York and other states so the number of undiscovered populations may not be large. It is likely that there are particular qualities, such as water depth, bottom substrate type, amount and type of aquatic vegetation, and pH, that make some lakes and ponds suitable while others are not.

There is no information on population trends for this species, although it seems likely that occupied sites are being lost due to changes in hydrology and water quality at some lakes and ponds across the species state range.

All but two of the locations where the species has been recorded are historical, but the historical locations have probably not been revisited. If the historical occurrences are no longer extant it would indicate a long-term decline.

Little published information is available citing specific cases of negative impacts to this species or other lake dwelling odonates, but any activities which degrade the sensitive hydrology of these habitats would threaten populations of these species. Examples include eutrophication and changes in dissolved oxygen content, direct effects of pesticides (e.g. for mosquito control or from agricultural runoff), increases in the sediment load of the lake (such as might result from agricultural runoff or removal of vegetation from the adjacent uplands), chemical contamination by runoff of agricultural or other discharge, and acidification of lakes by airborne industrial emissions. Groundwater withdrawal is also a likely threat at suitable sites on Long Island. Removal of large areas of forest or shrub habitats adjacent to occupied lakes and ponds could also threaten populations as these adjacent habitats are important for recently emerged adults until they reach maturity.

Research aimed at obtaining information on population size at occupied sites would be useful in determining the overall population for this species in the state. Research on larval habitat requirements may provide a better understanding of why the species is uncommon.

Small lakes, or bays of larger lakes, with marshy or boggy edges, and clear water with water lilies appear to be the principal habitat for this species (Dunkle 2000, Mead 2003). In Massachusetts, this darner is also reported from marshes and bogs with open water and coastal plain ponds (Nikula 2003). One historical record for New York is from a coastal plain pond, while other recent records come from a small lake and from a pond with an island of floating bog vegetation in the center (Donnelly 1992).

This species has been recorded from just ten locations in New York with these records coming from eight counties in various regions of the state including the Adirondacks, Finger Lakes, southern tier, eastern and southeastern counties, and Long Island. The wide distribution of these counties suggests that the species is likely to occur in other counties in these regions of the state. However, as in other portions of this species' range it is expected that this darner will be spotty, or local, in its distribution and a large number of populations will not be found.

This is a decidedly northeastern species that occurs from Nova Scotia, New England, and New Jersey, west to southern Ontario, northern Ohio, northern Indiana, Michigan, and Wisconsin (Needham et al. 2000). Within portions of this range the species is considered uncommon (Mead 2003) or local in its occurrence (Donnelly 1992, Nikula et al. 2003).

Like other blue or mosaic darners (genus Aeshna), adult mottled darners are large dragonflies with large eyes, a brown thorax with two blue-green stripes on the front and two on the side, and a long slender brown abdomen marked by two rows of sky blue spots. Unlike other species of Aeshna, the two stripes on the side of the thorax (the lateral stripes) are a broad, complicated pattern of blue, green, and yellow. The abdomen is very constricted at segment 3 giving this species a "wasp-waisted" appearance and the segments are separated by blackish joints. Adult mottled darners average approximately 2.7 in (6.8 cm) in length. The face is greenish with a brown crossline and a heavy black "T-spot" above the face. The eyes are blue-gray to greenish. The wings are clear. Females are similar to males, but pale areas may be more green than blue and may be more extensive than on males (Needham et al. 2000, Nikula et al. 2003, Mead 2003). The larvae are elongate, cylindrical shaped aquatic insects that are usually patterned in drab brown and greenish colors. They climb and crawl among aquatic vegetation. The antennae are composed of six or seven small, slender segments. Body length is approximately 1.42-1.57 in (36-40 mm) at maturity (Walker 1958 ), which may be at 1-3 years.

Close examination of the thoracic and abdominal pattern and terminal appendages is necessary for positive identification.

Adult males patrol shorelines during the middle of the day defending breeding sites, while females oviposit in emergent vegetation. Adults of both sexes will hunt in sunny clearings and woodland openings and will join other darners in feeding swarms (Dunkle 2000). As with most other darners, mottled darners typically perch vertically on tree trunks (Mead 2003, Nikula et al. 2003).

Based on available records the peak of the flight season in New York appears to be from mid-July through mid-September. There is just one New York record for June and the latest date is September 22 (Donelly 1992). Publications for Massachusetts (Nikula 2003) and the western Great Lakes area (Mead 2003) list the flight season as beginning in mid-July so the June record is probably an anomaly. Although the latest flight date recorded for New York is September 22, most September records are from the first half of the month, whereas the flight season in Massachusetts appears to extend into early October (Nikula 2003).

The time of year you would expect to find Mottled Darner present and reproducing in New York.

Information for this guide was last updated on: April 21, 2005