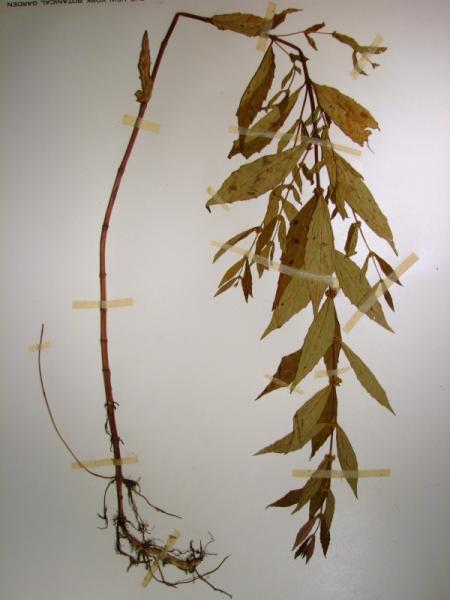 Stalked bugleweed is also known as stalked water horehound. Horehound comes from the Old English words har and hune, meaning downy plant. This descriptive name refers to the white hairs that give the related European herb Marrubium vulgare its distinctive hoary appearance. Another suggested derivation is from the name of the Egyptian god of sky and light, Horus. (Horehound in: Encyclopedia of alternative medicine by Claire Hanrahan at FindArticles.com. 15 Nov. 2007).

There are five existing populations but all of them are small and their continued existence may be tenuous. There are 10 historical occurrences but none of them have been relocated.

More survey work is needed to understand short-term trends as most populations have not been resurveyed in detail.

This species has always existed in low numbers in the state. There are probably never more than five existing populations at one time.

One population was found on the side of a boat dock that may be affected by the future decay of the dock. Information about threats has not been gathered for other populations.

Not enough is known about the current conditions of these populations to recommend specific management techniques other than the protection of the wetlands where they occur.

Herbarium studies are needed to determine if specimens of this species were originally identified as closely related common species.

In New York Lycopus rubellus has been found in marshes, fens, and flooded swamps, and at one site, growing from cracks in the stone wall of a dock along the Hudson River. More habitat information is needed from the few stations of this species in the state (New York Natural Heritage Program 2007). Damp soils of woods, thickets, etc. (Fernald 1970).

All the known, extant sites for this species are in the Lower Hudson Valley and Long Island. There are also historical records from Erie and Niagara Counties in western New York and Franklin County in the north.

Lycopus rubellus is found throughout most of the Eastern U.S., ranging from New York and Massachusetts to Florida in the east, and to Texas and Kansas in the west, reaching the northwestern edge of its range in Ontario and Michigan.

Lycopus rubellus is a perennial herb, growing erect from tuberous stolons (underground stems). It has opposite, toothed, petiolate leaves 5-10 cm long. The flowers are white, tiny (3.5 to 4mm long), and grouped into ball-like infloresences where the leaves meet the stem. The sepals are green, half as long as the petals, and longer than the fruit, which are tiny (1-1.6mm) nutlets.

Stems with fruit or flowers are needed for identification.

Lycopus virginicus and L. uniflorus have smaller calyx lobes that are shorter than the fruit; L. europaeus, an introduced species, has stiff, appressed hairs on the underside of the leaves (L.rubellus' leaves are glabrous or only nearly so); L. asper, L. anguistifolius, and L. amplectens all have sessile leaves (Gleason and Cronquist 1991, Voss 1996, Rhoads and Klein 2000).

Lycopus rubellus flowers from July to mid-August, and the fruits mature August through September and persist to early October.

The time of year you would expect to find Stalked Bugleweed flowering and fruiting in New York. 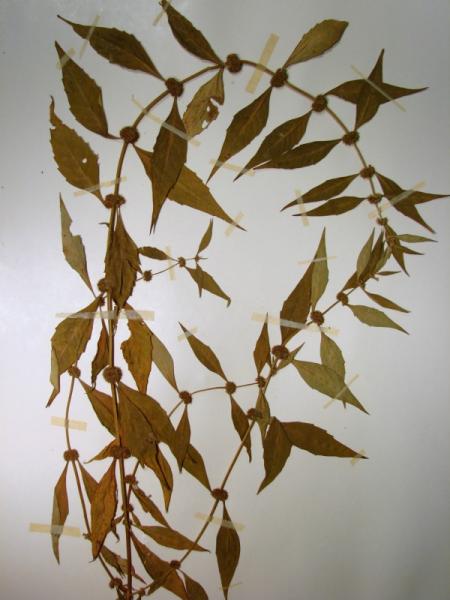 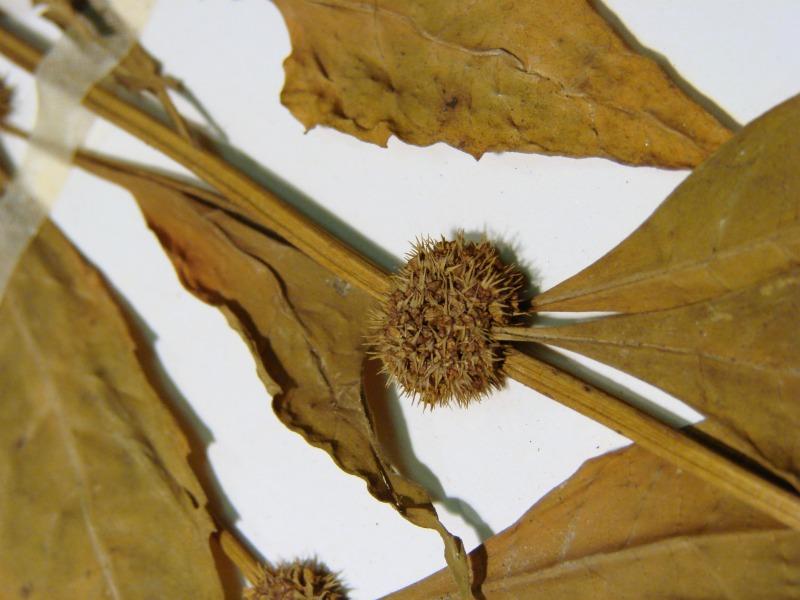 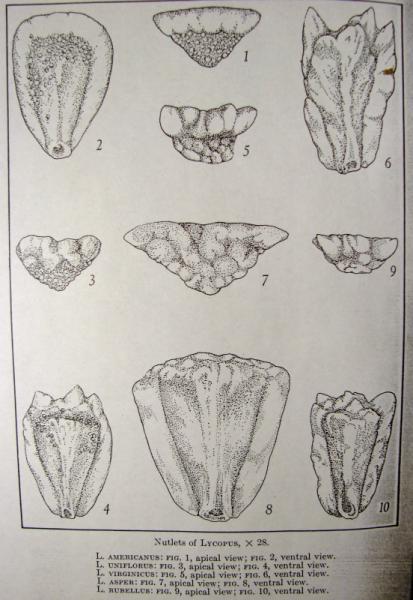 Information for this guide was last updated on: October 5, 2022