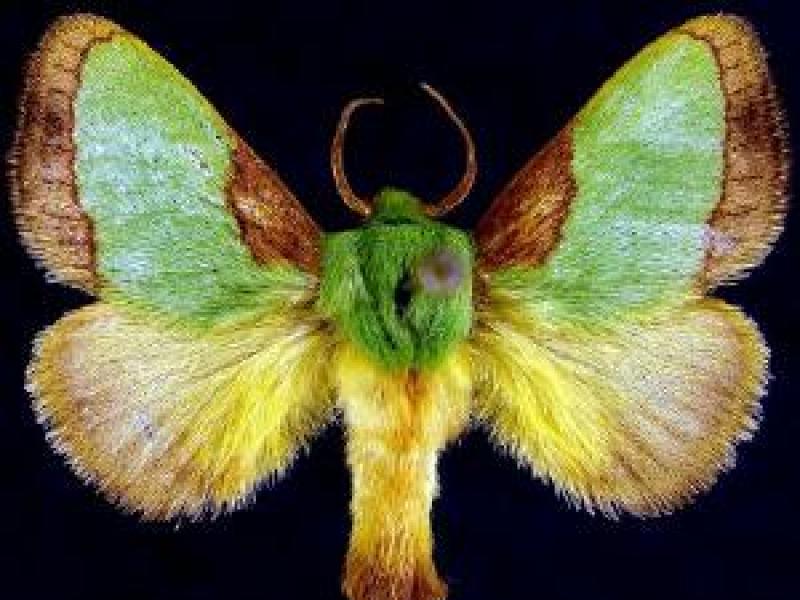 Stinging rose caterpillar moth larvae have detachable spines that contain toxins to ward off predators. These toxins can irritate human skin when contact is made with the spines.

This species was found on Long Island in Suffolk County in 2007. There are historical New York records that need further investigation, one apparently from Staten Island. Covell (1984) considers this species to be uncommon.

The short-term trend is unknown for this species. However, it was considered possibly extirpated from New York until it was documented in 2007 at a site on Long Island.

The long-term trend for this species are unknown. Covell (1984) stated that the species is uncommon, but information for New York is sparse.

Known threats include habitat loss due to development and fire suppression in some habitats, although the threat of development for the remaining habitat on Long Island may be low. The suppression of fires in barrens and other dry places could cause a loss of habitat for the species and therefore a drop in population size. Conversely, a fire affecting an entire occurrence could eliminate all life stages that are present.
This species is attracted to artificial lighting. Artificial lighting can: increase predation risk, disrupt behaviors such as feeding, flight, and reproduction, and interfere with dispersal between habitat patches. In addition, many individuals die near the light source. It is not known if the impact of artificial lighting is severe, but the impact is likely greater for small, isolated populations (Schweitzer et al. 2011).
Another potential threat is persistent use of biocides such as those used to control gypsy moths (Bess 2005).

The best management strategy for this species is the management of the natural community or habitat where it occurs. Historically, fire has played a role in maintaining maritime grasslands. The entire occupied habitat for a population should not be burned in a single year. For example, in places where prescribed burning is used, refugia (unburned areas) are needed for many species to ensure that any life stage can survive a fire. Schweitzer et al. (2011) suggests waiting five years before burning a unit again to give the lepidopteran population a chance to recolonize and increase local populations to withstand another fire. It may also be beneficial to know the locations of rare lepidoptereans since there's a chance of losing localized populations if there are no individuals at the area set aside as refugia (Schweitzer et al. 2011).

Insecticide use should be avoided when possible if rare species are present. When insecticide use cannot be avoided, careful planning along with consistent rare species monitoring, can result in successful eradication of the target species without eliminating rare species. A biocontrol alternative is Bacillus thuringiensis (Btk) for some target species, such as gypsy moths. Sensitivity varies between species and it appears that most species are not sensitive to Btk approximately two weeks post-application. Since it appears that spiny rose caterpillar moths are sensitive to some biocontrols, it is important to try to time applications to minimize mortality for this species. There are two other gypsy moth biocontrols that are currently unavailable, but appear to be very effective at eliminating gypsy moths with little effect on non-target species: Gypchek (a viral preparation) and Entomophaga maimaiga (a fungus).

New York is at the northern limit of this species' range. There is a single extant location in Suffolk County.

The range for stinging rose caterpillar moth extends from New York to Florida and west to Missouri and Texas.

Stinging rose caterpillar moth is approximately 2.3 to 3 cm. The forewing is brown with a large green patch and rounded outer edge. The terminal border has a dark patch in the light brown outer margin. The yellowish hindwing has a narrow brown border (Covell 1984). Eggs are laid along stems or on leaves. Larvae are less than one inch in length and are brilliantly colored with blue, orange, and white stripes. Six pairs of large tubercles are along the dorsal surface. These tubercles are covered with hollow spines with detachable tips. The tips contain toxins that can irritate skin. There is a additional row of spines along the sides of the body (Bess 2005).

Larvae have been documented to feed on: apple, dogwood, hickory, maples, oaks, poplars, and rose bushes.

Throughout most of this species range, adults can be found from June to July. Larvae feed throughout the summer and into the fall (Bess 2005).

The time of year you would expect to find Stinging Rose Caterpillar Moth present and active in New York.

Information for this guide was last updated on: June 26, 2012