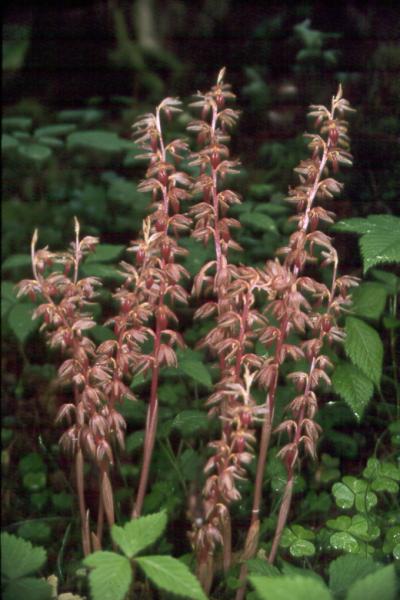 These orchids are almost totally devoid of chlorophyll and are dependent on fungi infecting their roots to gather nutrients from the surrounding organic matter. The jointed, coral-shaped roots gives this group of orchids their name. The alternate name fever root comes from its use in herbal medicine to reduce fever.

Currently, there is only one known population and three historical populations. This plant has always been rare in New York. While this is one of the more showy coral-root species, limited surveys in wetland habitats and a short flowering period may indicate that this species is somewhat overlooked.

The population size of the one known occurrence has fluctuated between zero and 16 plants. This is a plant that seems to survive at very low levels and not much is known about how it responds to its environment. Since the population is fairly isolated we do not expect major changes in the population in the near future.

This orchid was only ever known from four locations in the state. The historical locations are vague enough that we don't know if they still survive and searching for it is very difficult. Therefore it is unknown at this time whether it has declined or increased in size. We don't expect a large increase in numbers over time.

These plants are isolated but since they are the only occurrence in the state there is always a risk that researchers and photographers may trample plants while they are being studied and photographed.

Visits to the population need to be limited so disturbance is minimized.

Studies that determine what influences popualtion size would create a better understanding of this plant biology and may lead to management activities that will result in larger populations. We would also like to know how this plant responds to its environment and the best places to search in a large wetland environment.

This plant is limited to central New York and the western foothills of the Adirondacks. New York is at the southern edge of this species northeastern distribution. Further west it ranges south into Texas and Baja California

The main range of this species in the northwestern US and southwestern Canada. The full range extends from Labrador through southern Canada and the northern US west to Montana, at which point the range then extends south to Wyoming, New Mexico, and Texas and west to Baja California, California, and British Columbia.

Coralroot is one of our most striking and beautiful orchids. It has an erect red to reddish purple, succulent stem with 3-4 slightly loose and paler sheaths around the base. The inflorescence is half the length of the plant and contains 10-25, dime-sized, drooping flowers with distinctive light pink, translucent petals with red striped veins. The red lip is tongue-shaped with three darker red veins. It droops down with the petals forming an umbrella above.

This orchid may grow to a half-meter tall. The stem and sheaths are stoutish and a dull purple or magenta color. The flowering portion may be as long as 20 cm. This is one of the larger flowered coral-root species, with purplish flowers up to 2 cm long. The sepals and petals are purple-veined (darker than the surrounding tissue) and with 3-5 purple stripes. The lip is tongue-shaped, unlobed, and a madder-purple color. This lip is only striped near the base, about as long as the other petals, and abruptly drooping forward. The capsules are 1.5-2 cm long.

Flowers are really needed to properly identify this plant. Due to its rarity and typically small population size within New York, only photos should be taken. These photos show the entire plant with stem and close-ups of the flower, including something in the image to scale the size of the flowers and stem.

The sepal and petal of Corallorhiza odontorhiza is smaller (3-7.5 mm) and not striped. This plant flowers late summer to fall. The lip of Corallorhiza trida and Corallorhiza maculata is 3-lobed or with a prominent lateral tooth on each margin.

This orchid flowers late May to late June, although the peak blooming period seems to be mid-June. Surveys should be conducted during this flowering period.

The time of year you would expect to find Striped Coralroot vegetative, flowering, and fruiting in New York. 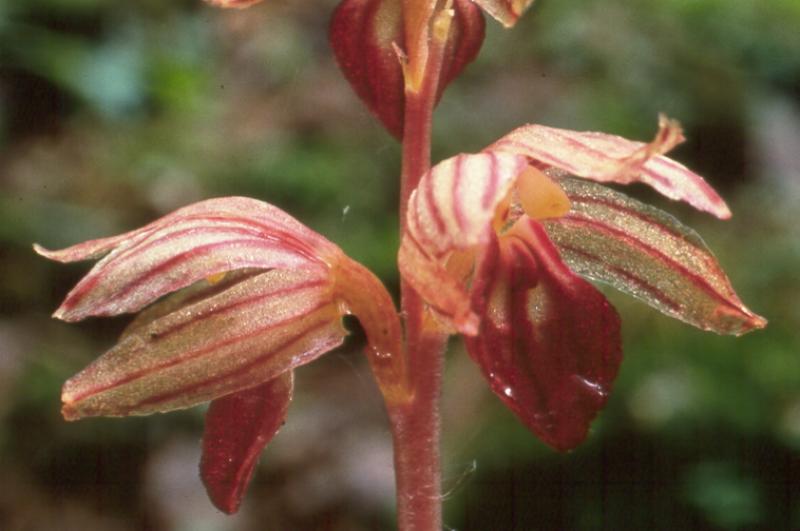 Many references do not list any varieties. We recognize this variety to distinguish from var. vreelandii, a taxon mainly restricted to the western US.