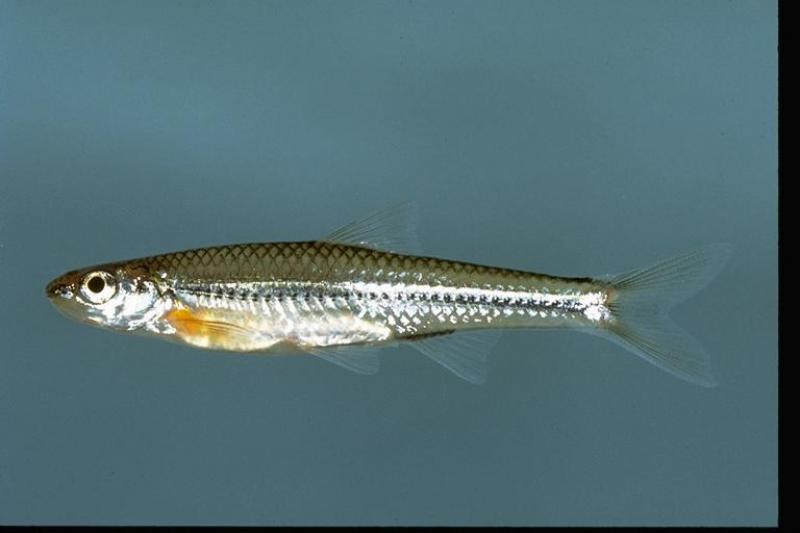 In the early 19th century, swallowtail shiners were a popular commercial aquarium species because of their small size, coloring, and somewhat docile behavior. Their popularity decreased as more colorful fishes became available (Estes and Gebhardt 1988).

New York is the northern extent of the swallowtail shiner range. Native populations are found in three of the 18 watersheds in New York: Susquehanna, Chemung, and Delaware. Populations in the Susquehanna and Chemung watersheds appear to be in decline, possibly due to the introduction of Notropis volcellus (mimic shiner) (Carlson et al. 2016).

Short-term trends are unknown at this time.

The decline varies by watershed in New York. The greatest decline is in the Chemung watershed that includes fewer locations and loss of known range (Carlson et al. 2016, New York State Department of Environmental Conservation 2005). Declines are noted in the Susquehanna watershed. Populations appear to be more stable in the Delaware watershed (Carlson et al. 2016).

Management needs are difficult to recommend until additional research addresses reasons for population declines. It is assumed that any practices that reduce water pollution would benefit the aquatic community. Restoration of riparian vegetation will help control nonpoint pollution. Agricultural practices that reduce the amount of runoff from livestock and crops could reduce nutrient enrichment and excess sedimentation. It is possible that mimic shiners were introduced in different areas of the state by fishermen discarding unused bait. Public education may help reduce this practice.

Swallowtail shiner are typically found in upland streams, small river, (Smith 1985) and occasionally in lakes (Carlson et al. 2016). Spawning occurs in riffles that are 4 to 12 in deep (Smith 1985). This species is tolerant of turbidity and sandy substrates, but avoids deep pools and swift rapids. Schools of fish are usually observed near the bottom.

Swallowtail shiners are native to three of the 18 watersheds in New York: Susquehanna, Chemung, and Delaware. It was introduced to the Upper Oswego and Lower Hudson watersheds, but has not been observed since 1972 and 1884, respectively (Carlson et al. 2016).

Swallowtail shiners are found above and below the Fall Line, from Santee River Drainage (South Carolina) to Susquehanna and Delaware river drainages (New York) and the Lake Ontario drainage (New York). This species is generally common throughout its range, but can be localized at the northern and southern part of its range. Occurrences in the New River drainage and the Upper Oswego watershed are apparently introductions (Page and Burr 1991).

Adults are the easier life stage to identify.

This species matures after one year. Males guard a territory of 4 to 18 inches.

Fish are typically found in schools near the bottom. They can be found in spawning habitat from late May through early July (Smith 1985).

The time of year you would expect to find Swallowtail Shiner active and reproducing in New York.

Information for this guide was last updated on: June 26, 2017