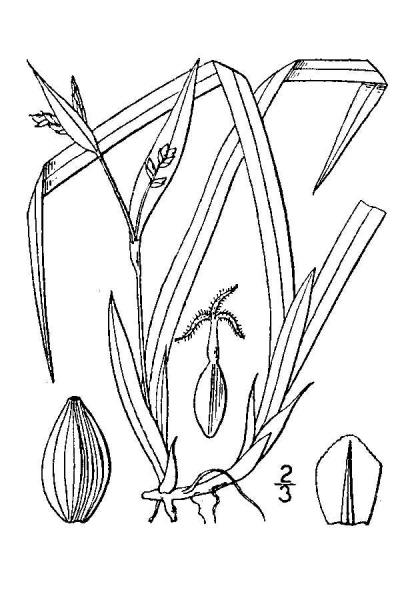 The specific epithet abscondita means concealed (Fernald 1970) which could refer to both: the staminate spike which is sessile and often concealed by the distal bract and/or pistillate spikes; as well as the culms which are shorter than and concealed by the leaves of the vegetative shoots.

There are currently six known populations and 15-20 historical populations, although some mis-identifications may exists. This plant may be overlooked, but New York is near its northern range limit. Still, we should anticipate finding a few more populations once more people have a better search image. All currently known populations are relatively small. No trend information is known and the threats are likely minimal.

All six extant sites have only been surveyed once and therefore, short term trends are unknown.

There are numerous historical populations (15-20) that have not been seen for over 20 years. These sites have not been revisited so it is unknown if the populations at these sites are still extant. All six extant sites were first seen in the 1980's and 90's. Some of these may be misidentifications while others were probably overlooked in the past. Therefore, long term trends are unknown.

Carex abscondita occurs in successional shrublands, mesic young and mature forests, forested banks of streams, and in or near swamps (New York Natural Heritage Program 2006). Rich, moist, wet slopes or bottomlands, deciduous or mixed deciduous-evergreen forests, on or just above flood plain of streams and rivers (Bryson and Naczi 2002).

Carex abscondita occurs almost exclusively in southeastern New York including Long Island, but a single extant record is reported from Steuben County. This record should be verified as it is quite disjunct from the rest of the range of the species and may represent C. digitalis or C. cumberlandensis. The range of this species in New York may be slightly obscured because some of the records of this species may be misidentified.

Carex abscondita is a perennial, tufted grass-like plant. Its leaves are long and strap like and 3-9 mm wide. Stems arise out of the leaves at the base of the plants and are 7-30 cm tall. The stems are relatively short and mostly are hidden among the leaves. Flower/fruit clusters occur at the end of secondary branches which come off of the main stems. The fruit clusters are 6-12 mm long. Fruits (perigynia) are 2.8-4.2 mm long (Bryson and Naczi 2002).

Carex abscondita is a cespitose perennial. Leaf sheaths of the lower leaves are white to brown. Leaf blades are 3-9 mm wide. Culms are 7-30 cm tall and the tallest vegetative shoots (measured from the base of the vegetative shoots to the longest fully outstretched leaves) are (1.4-)1.7-3.7(-4.9) times taller than the tallest culms. Therefore, the culms appear hidden in the leaves. There are (3-)4 spikes per culm. The lateral are pistillate and widely separated with the lowest being basal. The terminal is staminate, sessile to subsessile, and (3.5-)4.5-10.2(-11.5) mm long. It is often hidden by the approximate pistillate spikes and/or distal bracts. Staminate scales are obtuse. Perigynia are sharply trigonous in cross section at maturity, spirally arranged, and 2.8-4.2 mm long (Bryson and Naczi 2002).

As with many other Carex species, C. absondita is most easily identified when the perigynia are almost mature to mature but are not yet shedding heavily.

Carex abscondita is in immature to mature fruit from early June through early August. During the early part of this season the fruits are quite immature and identification is a little difficult. Likewise, toward the end of this season the fruits are shedding and identification is also more difficult. Therefore, surveys are most successful if conducted between mid-June and mid-July.

The time of year you would expect to find Thicket Sedge fruiting in New York.

Carex abscondita is in section Careyanae. It had previously been placed in section Laxiflorae by many authors. A recently described species, C. cumberlandensis, which occurs south of NY, was segregated out of C. abscondita (Naczi et al. 2001). So, only recent descriptions of C. abscondita should be used.