The species was noted as different from the closely related species Eleocharis diandra and Eleocharis ovata in 1975 but it was not formally assigned its present scientific name until the year 2000. It was referred to for many years by the unpublished name Eleocharis pallidostachys. It is globally rare because the only recent records are from the Androscoggin and Kennebec rivers in Maine and the Hudson River in New York. Its species name aestuum means "tidal" since it is found in the freshwater tidal areas of these three rivers.

There are two existing populations, one large and one small. There are 10 historical populations from the Hudson River area, mostly from the 1930s when intensive surveys were done.

The short-term trend is unclear because no recent surveys have been performed to see how the plants are doing.

Not enough recent surveys have been done at the historical occurrences of this species to determine its long-term trend. There are many historical records from the Hudson River surveys of the 1930s and they need to be checked again. The small size of this plant, its difficult technical characters, and its habitat in tidal areas will make this determination a long process.

There may be a threat from phragmites or purple loosestrife in tidal marshes but the full extent of threats is unknown.

It is unclear which specific management techniques are necessary to preserve these populations. The open shoreline habitat needs to be maintained by preventing establishment of invasive species and direct human destruction.

Research is needed on habitat preference and best management practices to protect current populations. All of the historical occurrences need to be checked for existing populations.

In New York this species has only been found in Ulster, Dutchess, Greene, and Columbia Counties, along the freshwater tidal portion of the Hudson River.

Tidal spikerush has been found in tidal rivers from Maine to Delaware.

Spikerushes consist of a simple stem (the leaves bladeless and inconspicuous), with the infloresence consisting of a solitary, many-scaled spikelet at the top of the stem. The perianth (sepals and petals), if present, is reduced to (usually 3 or 6) bristles. The base of the style is expanded into a tubercle, and is usually persistent on the fruit (achenes). Tidal spikerush may be up to 30 cm tall, the stems often spreading or declining. The spikelets are ellipsoid to ovoid and 3-10 mm long, and the scales colorless to pale brownish, except for a green midrib. There are 2-4 perianth bristles, or sometimes none, the tubercles are deltoid, and the achenes .75 to 1 mm long.

Fruiting specimens are necessary for identification.

Eleocharis aestuum is most similar to E. diandra and E. ovata. E. diandra differs from E. aestuum in its lower tubercles, brown floral scales, and absence of perianth bristles. E. ovata differs by having more (5-7) and longer perianth bristles (exceeding the combined length of the achene and tubercle), and narrow but taller (.3 to .5 mm high) tubercles, and is only rarely found in the tidal zone (Haines 2003, Haines 2001, FNA 2003).

The time of year you would expect to find Intertidal Spike Rush fruiting in New York. 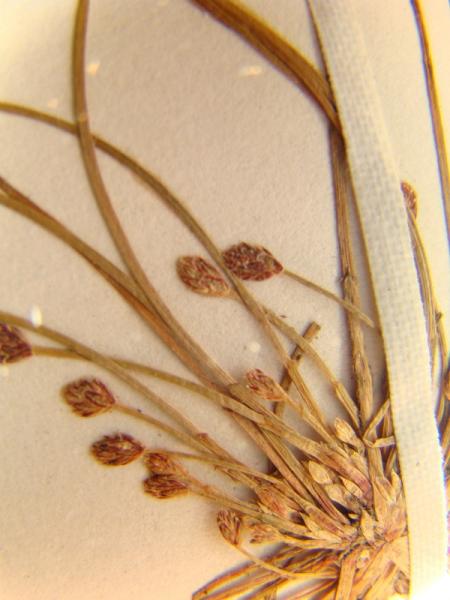 Eleocharis aestuum spikelet and base of plant
Richard M. Ring -- Courtesy of the William andLynda Steere Herbarium of The New York Botanical Garden 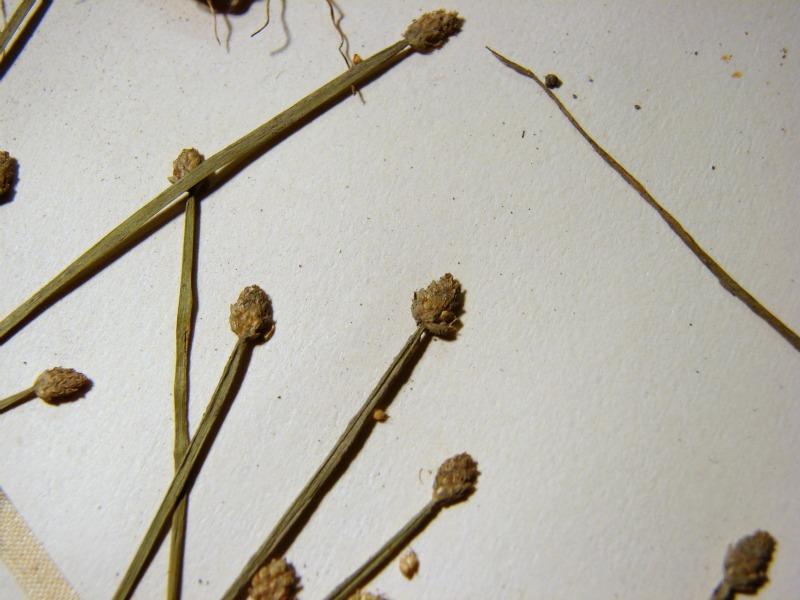 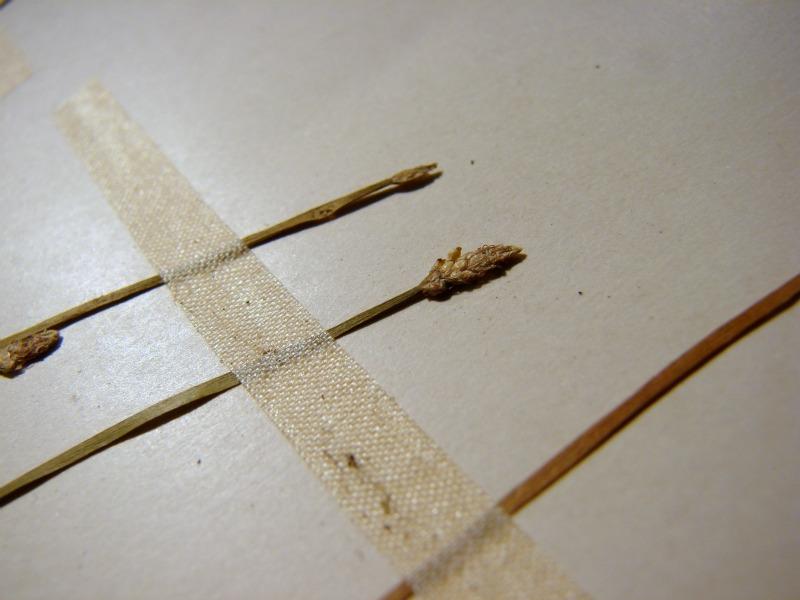