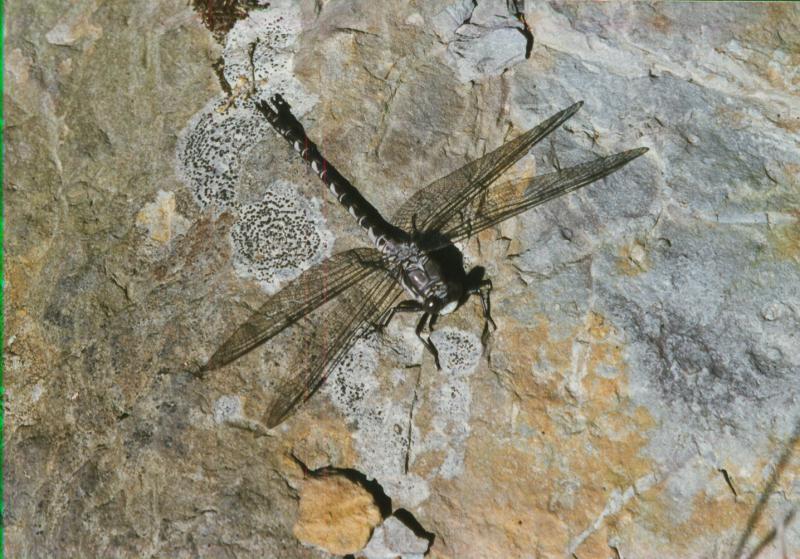 The gray petaltail is the only northeastern dragonfly species whose larvae may not be truly aquatic. The larvae live in the mud and vegetation of mucky, mossy, spring seeps which often contain very little standing water (Needham et al. 2000, Nikula et al. 2003).

As of 2006, there are just 11 confirmed locations for this uncommon and local species. Several of the sites are in close proximity to one another and could be functioning as a single metapopulation. While additional, undiscovered populations are expected, the specific nature of the species' habitat suggests that the number of sites may not be large. Although most known populations are on protected lands, populations for this species are not thought to be particularly large and there are some potential threats to the species.

There is no information on population trends for this species at known locations, although several sites have been known for decades, indicating that they are viable and presumably stable. There is also the possibility that some sites have been lost in recent years due to new suburban and other development in at least the rapidly growing lower Hudson Valley portion of the species range.

Several sites have been known for decades indicating that they are viable and presumably stable over the long-term. Suburban and other development has been taking place in the lower Hudson Valley portion of the species range for decades and it is possible that some sites, including two represented by historical records, have been lost.

Since seepage areas are the key larval habitat for this species, any activities that alter the quality or quantity of groundwater seepage in an occupied area would pose a threat to gray petaltails. The most important likely negative impacts would come from changes in natural hydrology through the building of dams, increases in sediment load of the seepage (such as might occur should extensive logging take place in or adjacent to the seepage), changes in dissolved oxygen content, direct effects of pesticides, and chemical contamination by runoff or agricultural discharge. Direct, intentional killing by people is a possible threat to this species. In at least one state park, petaltails squashed by park visitors have been observed. Petaltails are not wary and occasionally land on people whose first reaction is probably to swat the insect.

Consideration should be given to providing information to the public at state parks where this species occurs. The tame and harmless nature of the insects could be stressed in order to reduce the likelihood of the dragonflies being killed by startled hikers. For example, a photograph and brief information sheets could be provided at kiosks located near the entrances to trails during the late May-July flight period.

Although the larvae are known to be associated with seepage areas, and seepage areas are very apparent at some known sites, probable larval habitat is less apparent at some others. Efforts to locate larvae or exuviae to determine specific larval habitat is warranted for at least some of the known sites. A mark-recapture study similar to the study conducted by Dunkle (1981) in Florida would provide the basis for a better overall population estimate and long-term monitoring efforts for the species.

The general habitat of the gray petaltail can be described as hillside seeps and fens in areas of deciduous forest (Dunkle 2000). In New York, all known populations are found at rocky gorges and glens with deciduous or mixed forests. Small shallow streams flow through the gorges and glens, and these streams are fed by hillside seepage areas, groundwater fed seepage streamlets or fens. The seepage areas represent the larval habitat for these populations, while the adults use both the seepage areas and the stream courses (New York Natural Heritage Program 2006).

Gray petaltails are large black and gray dragonflies that are often seen perching on tree trunks. While they resemble some of the species of mosaic darners (genus Aeshna), they are easily distinguished from them by their well-separated eyes,and the long, parallel-sided stigma on the wing. The eyes are dark brown to gray. The thorax is mainly gray, while the abdomen is gray with black markings. Adult gray petaltails are approximately 7.1-8.0 cm in length. Females are similar to males, but have a well-developed blade-like ovipositor. The larvae can be recognized by their short, thick, and hairy 7-jointed antennae and by the quadrate form of the prementum and the strongly- angulated side margins of the abdominal segments (Needham et al. 2000).

The well-separated eyes and the long, parallel-sided stigmas on the wings are important characters for this species, although its large size and black and gray color make it difficult to confuse with any other northeastern dragonfly species.

The behavior of adult gray petaltails is quite interesting. They frequent sunny openings at, or near, the hillside seepages where males chase one another and wait for females to enter the habitat, mate and oviposit. Males also will fly up the length of large tree trunks searching for females and both sexes frequently perch on tree trunks. Adult petaltails are easy to approach, not wary of people and in fact will frequently land on people. At the same time, they are swift of flight and are difficult to follow when they do take flight (Dunkle 1981, Needham et al. 2000, Nikula et al. 2003).

The majority of the New York records and observations for this early-season species are from mid June through mid July, although there are also records from early June and into early August (New York Natural Heritage Program 2006, Donnelly 1999).

The time of year you would expect to find Gray Petaltail present and reproducing in New York.

Information for this guide was last updated on: March 31, 2006