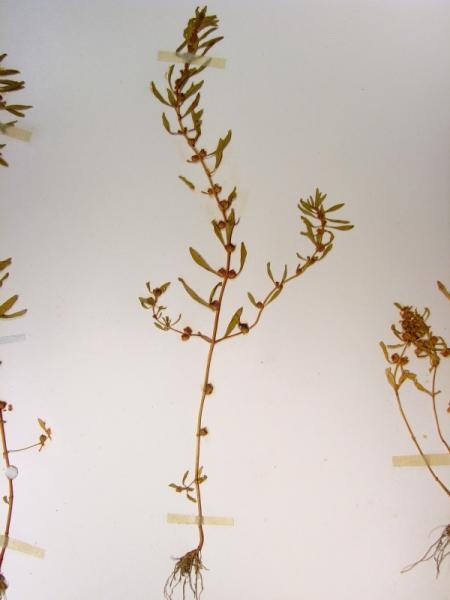 This is by far our smallest plant in the loosestrife family in New York. The genus name means wheel and comes from the whorled leaves of some of the species that look like the spokes of a wheel. The species name means many-branched and refers to its habit (Fernald, 1970). This is the only species of the genus in the Western Hemisphere but some other old world species are popular aquarium plants.

Short-term trends seem stable although more survey work would result in a better understanding of trends in a habitat where plants do not appear every year.

The shoreline habitat where this species occurs should be protected from direct human disturbance during the growing season and from the invasion of exotic plant species.

It should be determined if this species is able to use artificial drainage basins, or sumps, in any significant numbers.

In New York tooth-cup has been found most often along the shorelines and edges of ponds and lakes, as well as those of artificial wetlands including reservoirs and roadside catchment basins. It also will occupy seasonally-wet sites such as wet meadows or agricultural fields, especially where paths or other disturbance provides bare soil substrate. It has been found growing in organic muck as well as in sandy soil (New York Natural Heritage Program 2007). Sandy shores and damp depressions (Fernald 1970). In mud or wet soil (Gleason 1952).

Today this species is known in the state from Long Island and the Lower Hudson Valley, as far north as Orange and Putnam Counties. There are historical records as far north as Ulster and Albany Counties.

Tooth-cup is found in all U.S. states east of the Mississippi, except Maine and Vermont, and in just two Canadian Provinces: Ontario and British Columbia. It occurs in most of the western U.S. as well, and its range extends to South America.

Tooth-cup is a small (up to 10 cm high), annual species with often spreading or prostrate, branching stems. The leaves are opposite, short and narrow (1.5 to 3 cm long), and the stem, and sometimes the leaves as well, may be flushed with red (Voss 1985). The tiny, solitary flowers are sessile in the axils of the upper leaves. The calyx is cup-shaped and 1-4 mm long, and the petals white and only 1 mm long.

Flowering of fruiting specimens are best for identification, though it may be possible to identify this plant from only vegetative parts.

Tooth-cup is the only species of Rotala in New York (or for that matter, in North America.) Marsh seedbox (Ludwigia palustris), a common species which grows in similar habitats, has a similar overall appearance, but with much broader leaves and longer calyx lobes than tooth-cup. Rotala ramosior also confused with Ammania coccinea, a related species not yet known from New York but found in New Jersey and Pennsylvania, which differs from Tooth-cup by its cordate, clasping leaf bases.

Tooth-cup flowers from July through September, the fruits persisting through October.

The time of year you would expect to find Toothcup flowering and fruiting in New York. 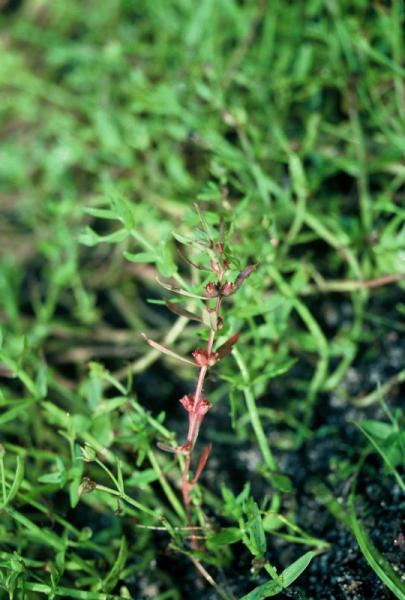 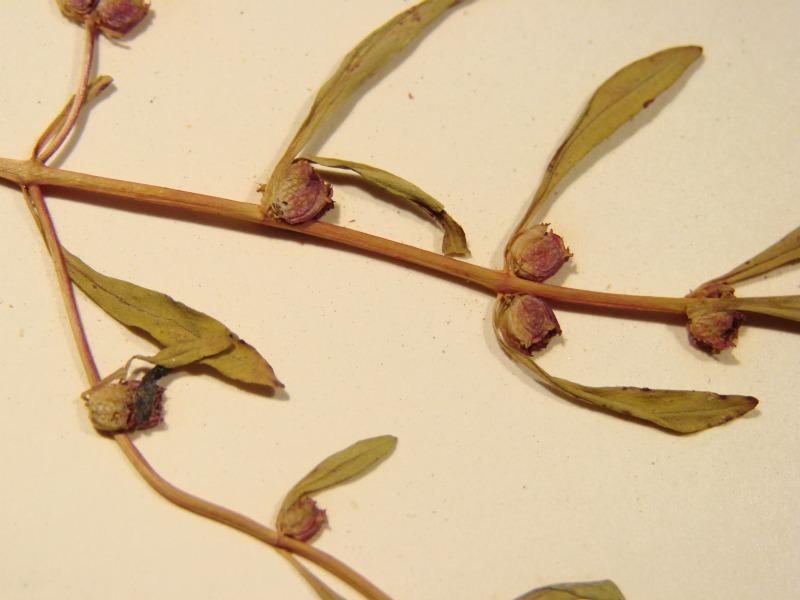 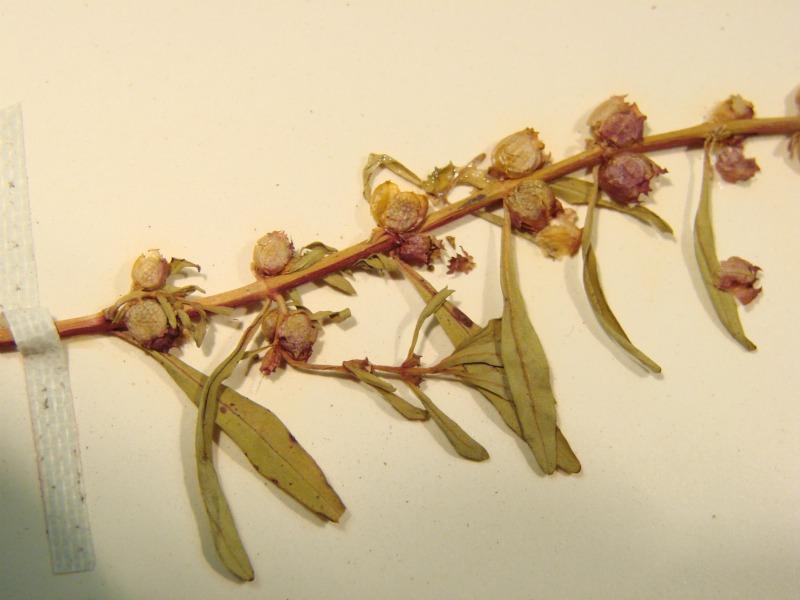 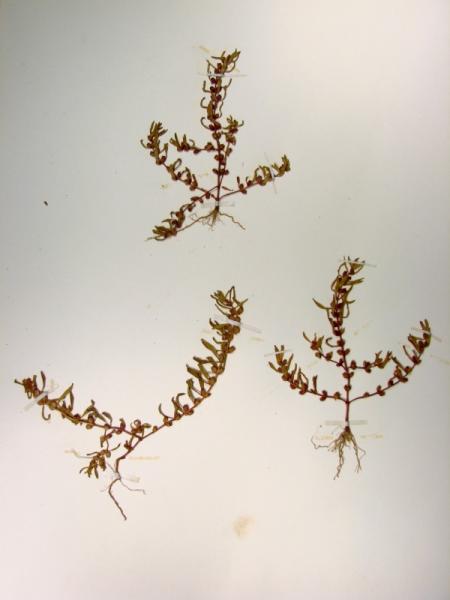 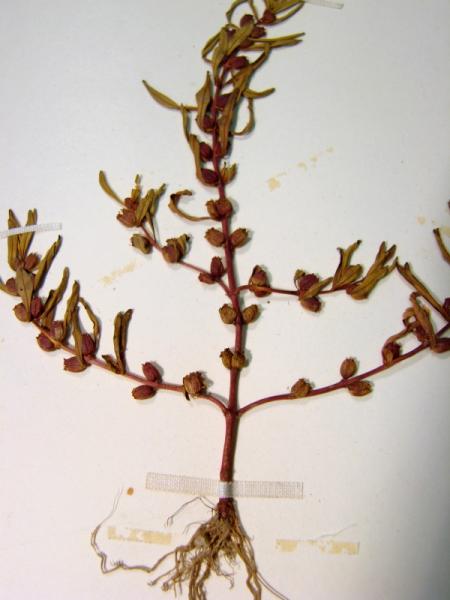 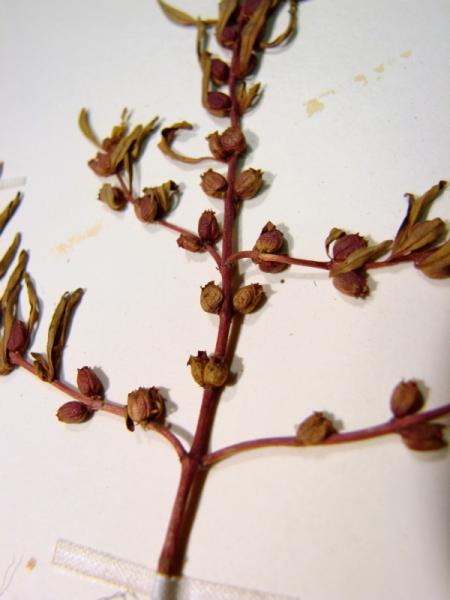