A cobble is a rock or rock fragment with a particle size between 6 and 25 cm (2.5-10 inches) in diameter. Pebbles are the next smaller geologic size class; they range from 4 mm to 6 cm (<2.5 inches). Pieces of gravel range from 2 to 4 mm in size and particles of sand and silt are smaller still.

There are probably only a few dozen occurrences statewide. A few documented occurrences have good viability and few are protected on public land or private conservation land. This community is limited to the water bodies with cobble shores that remain wet in the state, and there are only a few high quality examples. The current trend of this community is probably stable for occurrences on public land, or declining slightly elsewhere due to moderate threats that include alteration to hydrology, shoreline development, instream gravel mining, and invasive species.

The number and acreage of cobble shore wet meadows in New York have probably declined slightly in recent decades as a result of shoreline development, ateration to the hydrology, instream gravel mining, and invasive species.

The number and acreage of cobble shore wet meadows in New York have probably declined moderately from historical numbers likely correlated to the alteration of natural hydrology from impoundments, shoreline hardening, and instream gravel mining.

Where practical, establish and maintain a natural wetland buffer to reduce storm-water, pollution, and nutrient run-off, while simultaneously capturing sediments before they reach the wetland. Buffer width should take into account the erodibility of the surrounding soils, slope steepness, and current land use. Wetlands protected under Article 24 are known as New York State "regulated" wetlands. The regulated area includes the wetlands themselves, as well as a protective buffer or "adjacent area" extending 100 feet landward of the wetland boundary (NYS DEC 1995). If possible, minimize the number and size of impervious surfaces in the surrounding landscape. Avoid habitat alteration within the wetland and surrounding landscape. For example, roads and trails should be routed around wetlands, and ideally not pass through the buffer area. If the wetland must be crossed, then bridges and boardwalks are preferred over filling. Restore past impacts, such as removing obsolete impoundments and ditches in order to restore the natural hydrology. Reduce or eliminate instream gravel mining from the best examples of cobble shore wet meadow. Prevent the spread of invasive exotic species into the wetland through appropriate direct management, and by minimizing potential dispersal corridors, such as roads. Maintain or restore the natural flood and ice scour regime.

Where practical, establish and maintain a natural riparian buffer to filter storm-water, pollution, and nutrient run-off from surrounding uplands and to capture sediments before they reach the cobble shore. Avoid habitat alteration along the shoreline and in surrounding landscape. Minimize potential dispersal corridors for exotic species, such as roads and bridges. Maintain or restore the natural flood and ice scour regime.

Survey for occurrences statewide to advance documentation and classification of cobble shore wet meadow. Continue searching for large sites in good condition (A- to AB-ranked).

Currently mapped sites are restricted to Clinton County on the shores of Lake Champlain. It probably also occurs along Lake Ontario and the St. Lawrence River River, and possibly on a few large inland lakes (such as the Finger Lakes).

This community is possibly restricted to the Great Lakes basin. Concentrated in the Saint Lawrence and Lake Champlain lowlands. It probably also occurs along the five Great Lakes and possibly on a few large inland lakes such as the Finger Lakes of New York. This range is estimated to span north to southern Ontario, west to Minnesota, south to Ohio and east to Vermont.

Cobble shore wet meadows occur on the cobble shorelines of lakes and rivers where the substrate is moist from seepage or intermittent flooding. The substrate is a mixture of cobbles, sand, and clay. These communities are likely to be scoured by floods or winter ice floes, but there is apparently no significant accumulation of pack ice. Vegetation may be sparse.

Known examples of this community have been found at elevations between 84 feet and 250 feet.

During late summer, when water levels are at their lowest, the greatest diversity of herbaceous plants can be observed. The exposed substrate along the water's edge can feature a large variety of forbs, sedges, and rushes. 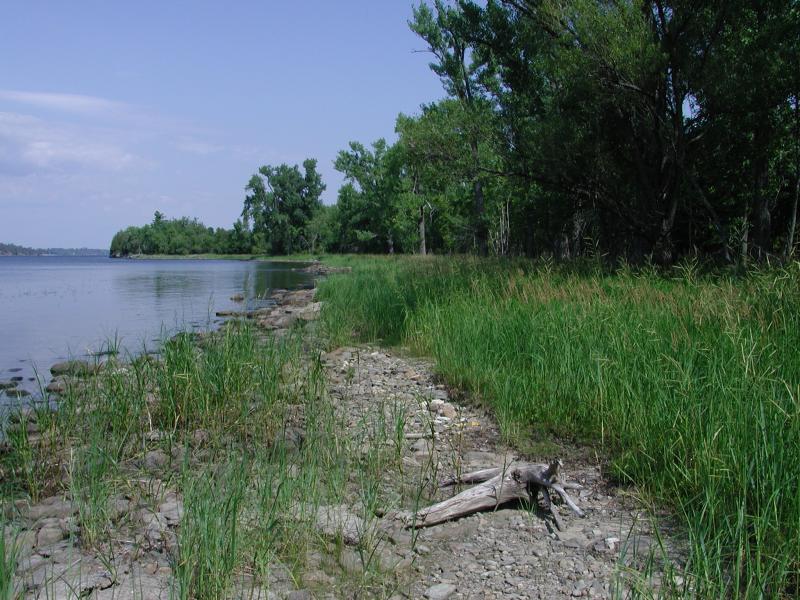 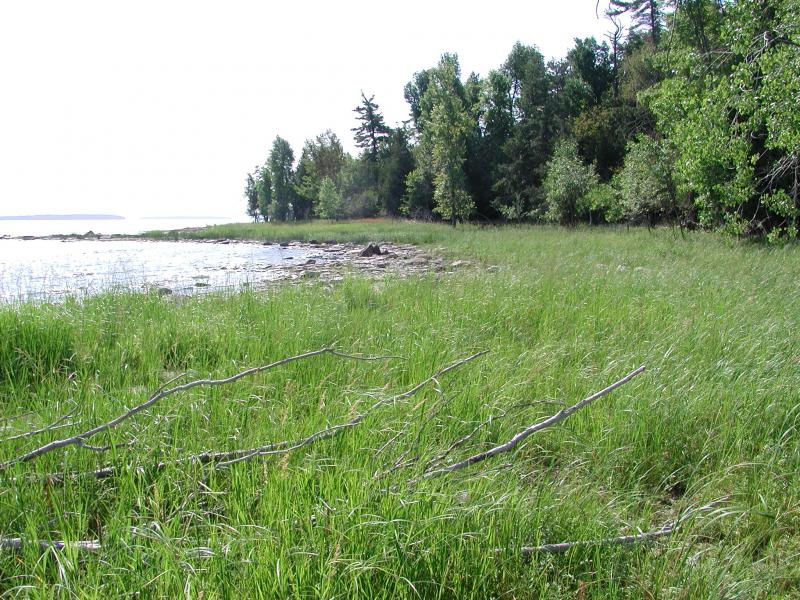 This figure helps visualize the structure and "look" or "feel" of a typical Cobble Shore Wet Meadow. Each bar represents the amount of "coverage" for all the species growing at that height. Because layers overlap (shrubs may grow under trees, for example), the shaded regions can add up to more than 100%.