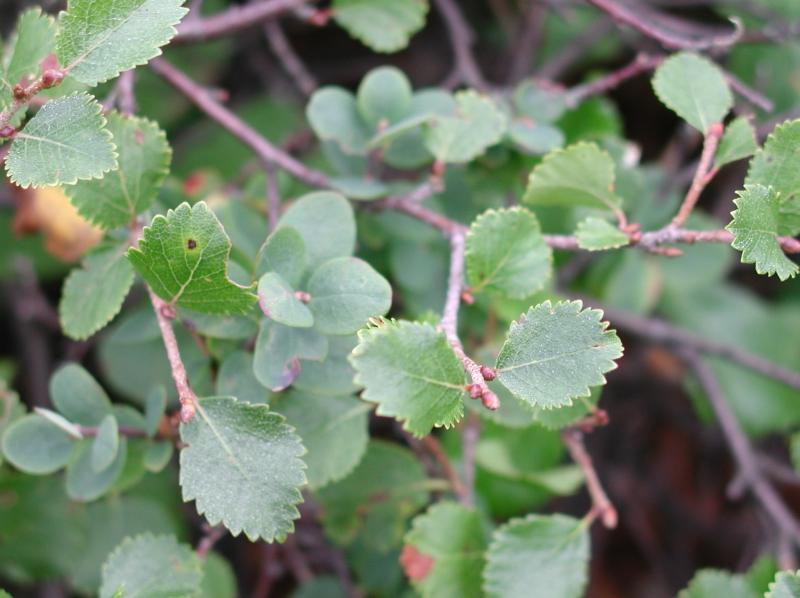 The scientific epithet glandulosa is in reference to the very dense gland-like structures that occur on the twigs of this species. Unfortunately, in New York, tundra dwarf birch has fewer and less glands on its twigs than in the rest of its range (Furlow and Mitchell 1990). This species has the smallest leaves of any birch in New York.

There are only three known populations, all restricted to the highest summits of the Adirondacks. One population has fewer than than 50 individuals, and two of the populations are only about one mile apart.

Short-term trends are unknown except that to at least some degree trampling by hiker traffic is threatening and perhaps has already damaged at least part of some populations.

No populations are believed to have been extirpated in the past 100 or so years. At least one population appears to be robust and vigorous. There are no other data indicating the long-term trends for this species in New York.

Trampling by hiker traffic is a threat to at least part of the population at two of the three populations present in New York State.

Continued regular inventories which include an assessment of the size of the populations are needed. A clear assessment should also be determined for the impact of trampling by hiker traffic.

In New York, the species is restricted to alpine meadows and openings in alpine krummholz (New York Natural Heritage Program 2007). Throughout the range of the species it occurs in arctic and alpine tundra, acidic rocky slopes and barrens, muskegs, peat bogs, stream banks, and open subalpine summits (Furlow 1997). In New York, it grows only on crests and summits (Furlow 1990). Throughout the range of the species it occurs in bogs and wet alpine slopes and summits (Gleason and Cronquist 1991). In arctic North America it occurs on acidic rocky barrens, crests, and summits. Also in more southern areas such as the Adirondacks it grows in alpine areas (Fernald 1970).

This species is only known from three alpine summits in the high peaks region of the Adirondacks all of which are less than five air miles from each other.

This species grows throughtout the subarctic regions of North America and south in alpine habitats. It occurs from Alaska east to Greenland and Newfoundland south in the mountains to California, Utah and Colorado, and in the east to northern New York and northern New England (Furlow 1997).

In New York, Tundra dwarf birch is often a very low shrub growing in dense thickets, but very rarely it can get grow up to 6 or occasionally 10 feet. The branches are often twisted together and the twigs have large resinous glands, although in the western part of this species range the twigs are more densely glandular. The leaves are leathery, up to 1/2 or rarely 1 and 1/4 inches long, and have teeth along the edges. The flowers are small and inconspicuous but grow in dense clusters known as catkins. Separate catkins are composed entirely of female or male flowers.

Betula glandulosa has twigs with large conspicuous warty glands although in New York these can be somewhat smaller and less dense. The alternately arranged leaves are obovate to suborbicular, singly dentate, have a rounded apex, a mostly glabrous adaxial surface, a glabrous to sparsely pubescent (more densely pubescent on veins and in leaf axils) and glandular abaxial surface, and are (0.5-)1-2(-3) cm long. The scales of the fruiting aments have upturned lateral lobe apices (Furlow and Mitchell 1990).

This species is easy to identify vegetatively although it can sometimes approach B. pumila except that the habitats where they grow are quite different and the two are not found together at least in New York. Therefore, vegetative characteristics and a description of the habitat are all that is needed for identification although fruiting characteristics are useful.

The time of year you would expect to find Tundra Dwarf Birch vegetative, flowering, and fruiting in New York. 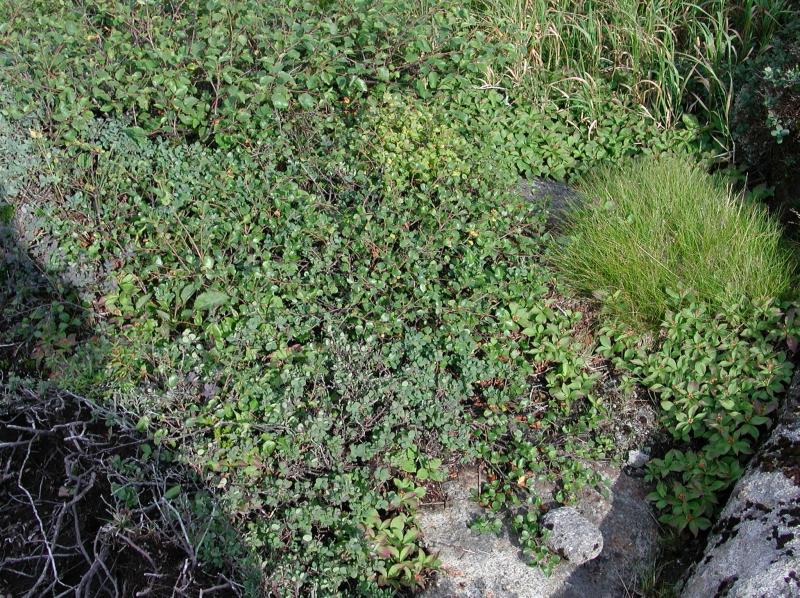 Following Furlow (1997), Betula glandulosa is considered distinct from B. pumila and B. nana (only the former also occurs in New York). This species is known to hybridize with B. pumila, producing plants known as B. x sargentii Dugle but this hybrid is not known to occur in New York probably because the two species grow in different habitats and locations that are isolated from each other (Furlow and Mitchell 1990).