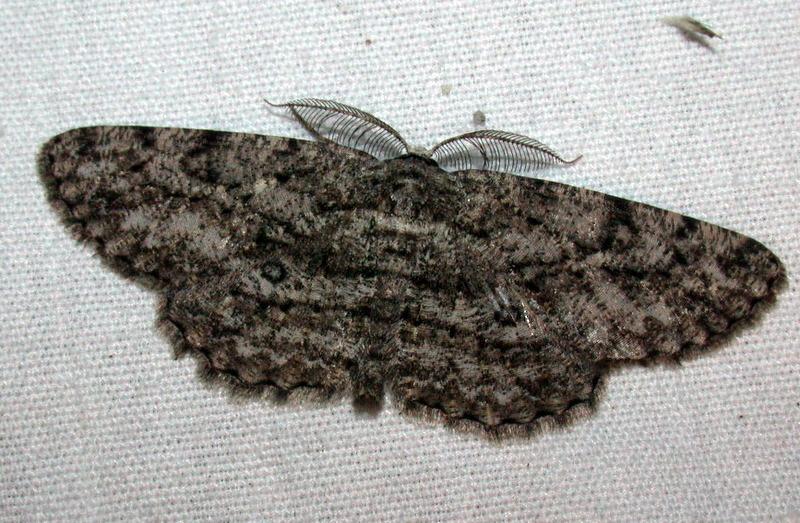 Geometridae are also known as "inchworm moths" because of their distinctive larval form.

Covell (1984) says this species is common rangewide. However, there is one known extant occurrence in the state. Further investigation is needed to determine the status.

Known threats include habitat loss due to development and fire suppression, although the threat of development for the remaining habitat on Long Island may be low. The suppression of fires in barrens and other dry places could cause a loss of habitat for the species and therefore a drop in population size. Conversely, a fire affecting an entire occurrence could eliminate all life stages that are present.

The best management strategy for this species is the management of the natural community or habitat where it occurs. Historically, fire has played a role in maintaining maritime grasslands. The entire occupied habitat for a population should not be burned in a single year. For example, in places where prescribed burning is used, refugia (unburned areas) are needed for many species to ensure that any life stage can survive a fire. Schweitzer et al. (2011) suggests waiting five years before burning a unit again to give the lepidopteran population a chance to recolonize and increase local populations to withstand another fire. It may also be beneficial to know the locations of rare lepidopterans since there's a chance of losing localized populations if there are no individuals at the area set aside as refugia (Schweitzer et al. 2011).

Insecticide use should be avoided when possible if rare species are present. When insecticide use cannot be avoided, careful planning along with consistent rare species monitoring, can result in successful eradication of the target species without eliminating rare species. A biocontrol alternative is Bacillus thuringiensis (Btk) for some target species, such as gypsy moths. However, sensitivity to Btk varies among native species and this option should be fully researched for treatment timing and regimes and weighed with other options to have the least impact on native lepidopteran populations (Schweitzer et al. 2011).

It would be beneficial to determine the ability of this species to persist after fires within pine barrens habitat and how the species has responded at sites where fire has been suppressed. Further investigation is needed to determine this species' habitat needs in New York.

In New York, umber moths have been found between maritime dunes and maritime grassland habitats. Further investigation is needed to determine this species' habitat needs in New York. NatureServe (2011) considers this to be a pine barrens species.

Umber moths have a wingspan of 2.6-4 cm. Wings are pale to dark gray with scalloped, jagged antemedial, postmedial, and subterminal lines that are black. All wings have discal spots that are elliptical and hollow (Covell 1984). Larvae are approximately 37 mm in length. The head is "reddish brown with areas of dark brown composed of irregular spots." The body is "mottled in shades of reddish brown" (Heitzman 1982).

Throughout the umber moth's range, the active dates are from April until August (Covell 1984). On Long Island, they are most likely to be found May through June (Schweitzer 1998).

The time of year you would expect to find Umber Moth present and active in New York.

FORBES (1948) PUTS THIS MOTH IN THE GENUS PSEUDOBOARMIA.

Heitzman, R.L. 1982. Descriptions of the mature larva and pupa of Hypomecis umbrosaria Lepidoptera Geometridae. Proceedings of the Entomological Society of Washington 84: 111-116.

Information for this guide was last updated on: June 27, 2012