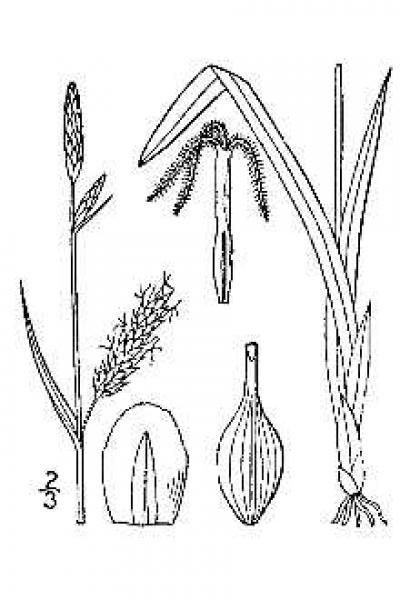 State Conservation Status Rank
SX
Presumed Extirpated from New York - No existing locations known anywhere in New York despite intensive searches of historical locations and other appropriate habitat, and virtually no likelihood of rediscovery.
Global Conservation Status Rank
G3
Vulnerable globally - At moderate risk of extinction due to rarity or other factors; typically 80 or fewer populations or locations in the world, few individuals, restricted range, few remaining acres (or miles of stream), and/or recent and widespread declines.

This species was considered for federal listing under the Endangered Species Act but was withdrawn when additional populations were found. Still, there are fewer than 45 extant populations in the world (Everett 2001).

There are no known populations within New York today, but there are ten historical sites. Extensive surveys of the Long Island locations have failed to locate this plant and habitat has been severely diminished through urbanization and other types of habitat alteration. With New York is located within the middle of this sedge's range, the liklihood of finding it within New York is pretty low.

The species is considered extirpated in New York. The last report was from 1929.

The plant was historically known from 10 sites in New York but all of these sites no longer have habitat for this species. Therefore, Carex polymorpha is presumed extirpated in New York. The last report was from 1929.

This species is considered extirpated at all of its historical locations due to habitat alteration and destruction. Mostly this is the result of urbanization. Based on these New York sites, urbanization has been the highest threat.

All the historical sites for Carex polymorpha in New York (Queens, Nassau, and Suffolk Counties) are considered extirpated. Most of these sites are in areas now completely urbanized. Botanist working on Long Island or in southeastern New York should be aware of how to identify this species and keep an eye out for it in potential habitat. Due to the fact that the areas where this sedge used to grow have been destroyed, more of a concerted effort is not needed.

In New York the species has been reported from open dry ground on a sandy bank of a reservoir, the edge of swampy woods, the edge of a bog, and dry sandy open scrub (New York Natural Heritage Program 2005). Thin woods with sandy soils (Rothrock and Reznicek 2002). Carex polymorpha occurs in sandy soils with low or high organic content and little or substantial duff. Sometimes the soils are loams. Sites often have a clay layer below the sandy surface soils creating seasonally saturated conditions. Many sites are just upslope of more regularly inundated wetlands. Sites occur in the open and less vigorously in the shade. (Standley and Dudley 1989). Occurs in uplands or adjacent to wetlands in strongly acidic friable soils that are seasonally saturated. Habitats where it occurs include forests, woodlands, shrubby, and open sites (Rawinski 1988). Dry sandy open woods and clearings (Fernald 1970).

The species was historically known only from Long Island and New York City (Queens, Nassau, and Suffolk Counties). All historical populations are considered extirpated. The Shawangunk Ridge also provide some potential habitat but the species has never been found there.

This sedge is an herbaceous grass-like perennial herb. Reproductive shoots are up to 60 cm tall. Leaf width is 2.5-5.0 mm wide. It spreads vegetatively by elongate rhizomes with one or a few shoots arising from nodes along the rhizomes.

All shoots are annual and are produced singly or in small clumps from nodes of the elongate rhizomes. Overwintering perennating shoot tips bend rather than stab, under gentle pressure. In shaded habitats as opposed to more open environments, there are fewer reproductive culms present. Leaves are up to 45 cm long, 2.5-5.0 mm wide, and are pale green (yellowing later in the season). Proximal leaves of reproductive shoots have bladeless sheaths that are red-brown to purple-brown and do not disintegrate into a ladder-fibrillose (pinnate network of persistent veins) condition. The abaxial surface of the leaf sheaths are densely papillose. Ligules are 2-10 mm long and are longer than wide. Bracts all have a sheathing base. Distal 1-3 spikes are staminate. Proximal 0-3 spikes are pistillate or androgynous, often branch at the base of the spikes, and are 1.5-3.5 cm long by 7.5-10.0 mm wide. Perigynia are 4.2-6.8 mm long by 1.5-2.5 mm wide, papillose, have a purple tinged obliquely bidentate beak. (Rawinski 1988, Standley 1989, Rothrock and Reznicek 2002)

This species is easiest to identify when in immature to mature fruit although some populations especially in shaded environments will have few or no flowering/fruiting culms.

Although from a different section, Carex vestita has been considered to be morphologically similar. Standley (1989) lists the following differences. Carex vestita has bladeless sheaths 8-10 cm long (vs. 5 cm. long); apex of bladeless sheaths with a sharply acute apex (vs. broadly acute); bladeless sheaths disintegrating into a pinnate network of persistent veins (vs. not disintegrating into network of veins); abaxial surface of bladed leaf sheaths smooth (vs. densely papillose); abaxial surface of leaf blades smooth, shiny, and dark green (vs. rough appearing white or dull); and adaxial surface of leaf blades with numerous antrose prickles on surface and veins (vs. no or few prickles on veins).

Carex polymorpha is a member of the section Paniceae. Other members of this section that occur in New York have beakless perigynia except for C. vaginata which occurs in calcareous wetlands (vs. acidic dry to wet habitats) and has proximal bladeless sheaths brown (vs. red brown to purple brown).

In New York, Carex polymorpha is likely in immature to mature fruit from early June through mid-July and probably into August. The best time to survey for the species is during this time period.

The time of year you would expect to find Variable Sedge fruiting in New York.