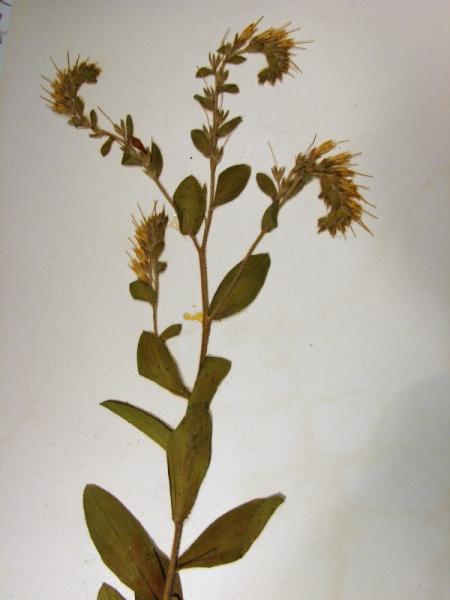 The genus name Onosmodium comes from this plant's similarity to the Eurasian genus Onosma, also in the Borage family.

There is one existing population of approximately 20 plants. There are 22 historical records mostly from the late 1800s and early 1900s from open disturbed areas on Long Island and the Lower Hudson region. The probability of relocating more populations is low because many of the areas have been developed or have been previously searched.

The one existing population has been stable at low numbers for the last 20 years.

None of the 22 historical records from the late 1800s and early 1900s have been relocated because they are from areas that have been developed or have succeeded to other vegetation. This decline has not been offset by new discoveries in other areas.

There are no immediate threats to the current population. Future threats could include succession by woody plants and invasion by exotic species.

Research is needed to determine the specific habitat requirements of this species and why it was not able to survive in the existing habitat that remains on Long Island and the Lower Hudson region.

The sole extant record for this species in the state is at an inland red cedar barrens, where it is found growing in calcareous soil with exposed bedrock and a mixture of trees, grasses and herbs. Most of our historical records are from the Long Island and New York City area, and indicate only that it was found in sandy, open sites. Elsewhere in its range it also occupies these two distinct habitat types: both open maritime uplands and inland limestone or other rocky calcareous sites (New York Natural Heritage Program 2007). Pinelands, dry sandy woods and open sands (Fernald 1970). Dry woods and barrens (Gleason & Cronquist 1991).

In New York Onosmodium virginianum has been collected from Long Island and from scattered locations in the Hudson Valley, from New York City to as far north as Albany County. The only known extant site is in Dutchess County.

This species is found along the Atlantic and Gulf Coasts, from New York (and believed to be extirpated from Massachusetts) in the north to Louisiana in the south. It is of conservation concern in many of the states in the northern portion of its range.

Onosmodium virginianum is a perennial wildflower, its hairy stems growing up to 60 cm tall. Its leaves are alternate, narrow, and entire, progressively smaller up the stem and into the branched infloresence as reduced bracts. The flowers are unusual in that the pistil and stamens develop before the petals. The petals are yellow, fused into a tube, and hairy.

This species is best identified when in flower, though it is also possible to identify specimens with mature fruit.

If seen in flower, this species should not easily be confused with anything growing in New York. Onosmodium molle, the only other species of Onosmodium in the state, has white or greenish flowers.

In New York this species flowers in June and July and the fruits may persist to mid-November.

The time of year you would expect to find Virginia False Gromwell flowering and fruiting in New York. 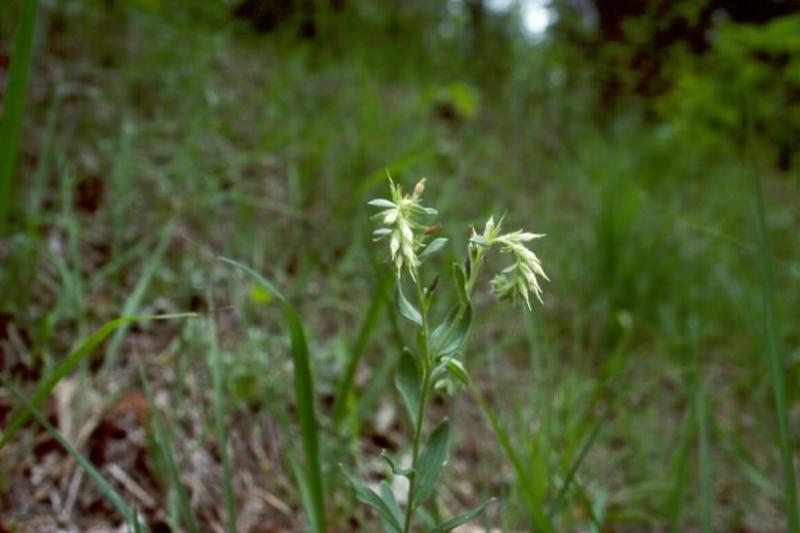 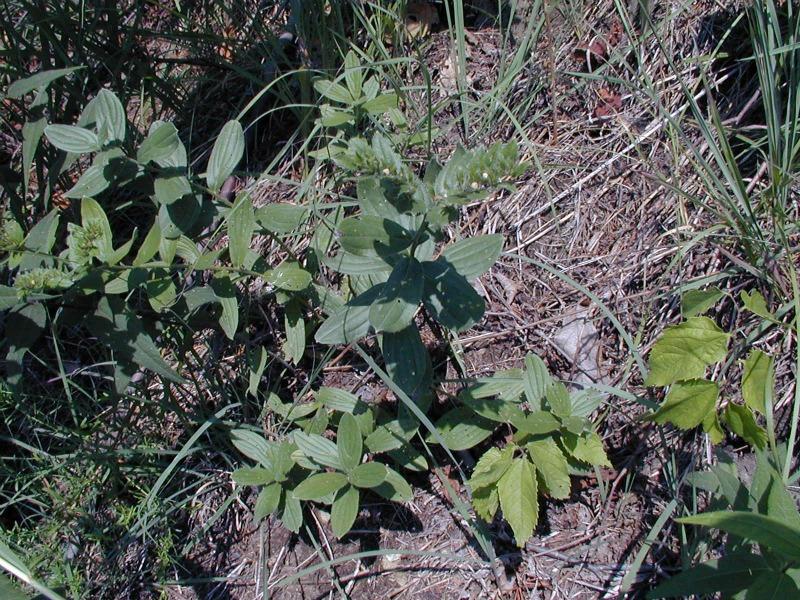 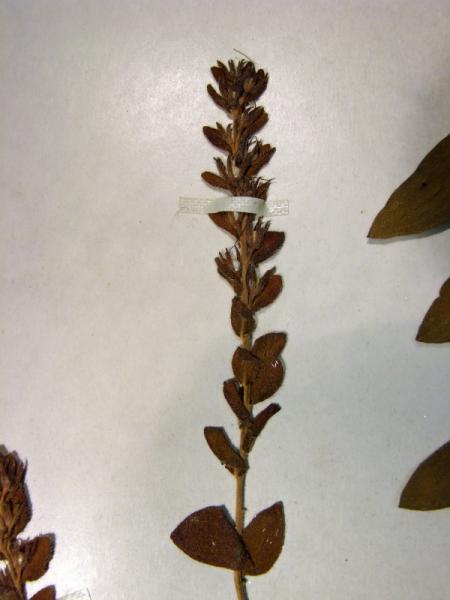 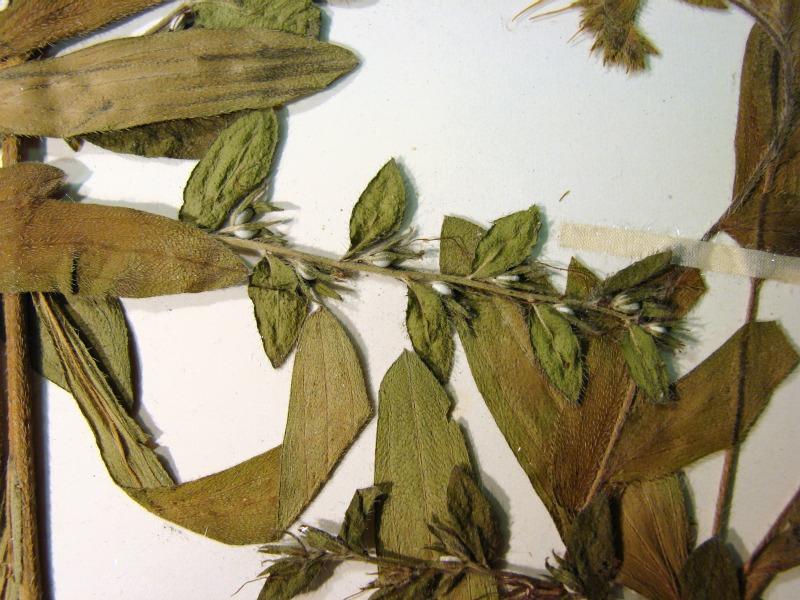 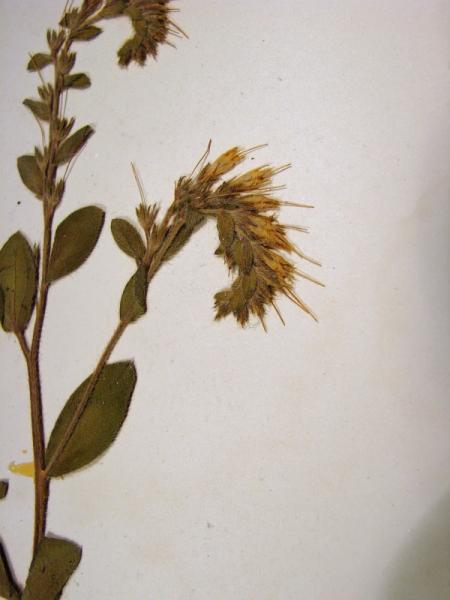 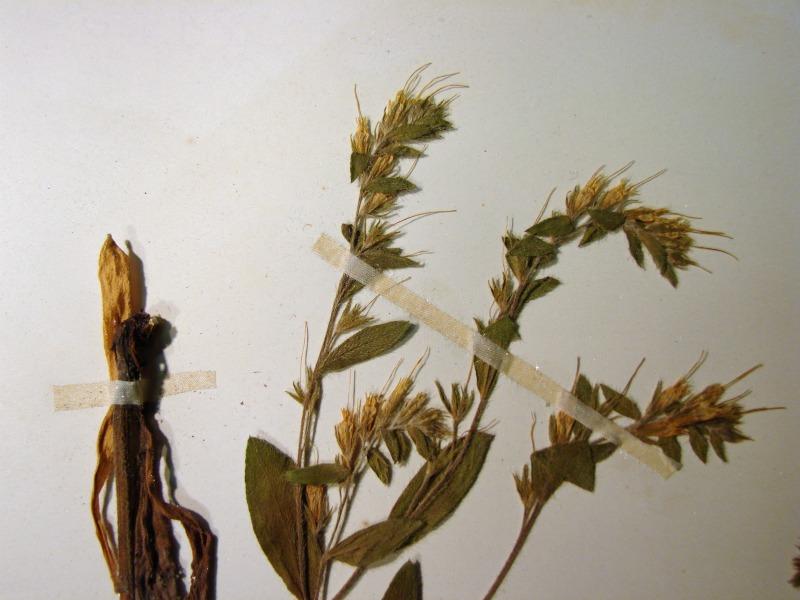