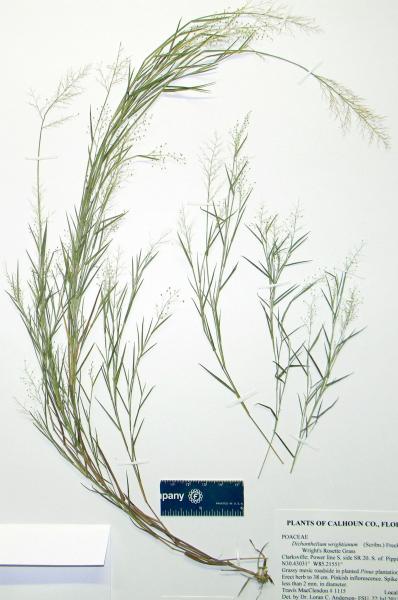 The name for the genus comes from the Greek words meaning two-flowering, and refers to the two flowering periods of these grasses, once on the primary stalk in the spring and again on the branches in late summer. This species was named for its discoverer, 19th century botanist Charles Wright (Fernald 1950). Wright collected plants from Texas for Asa Gray and has many plants named after him (Wikipedia contributors).

There are three existing populations but the population size is only known in one of them. This population has hundreds of plants. There are four historical populations from the early 1900s and one from 1966 which have not been rediscovered although habitat still exists.

Repeated surveys have not been performed for any of the populations so short-term trends are unknown.

This plant has always been rare in New York and at very low levels where it remains today. This trend should continue into the foreseeable future.

Some ponds have seen too much development along the shoreline which threaten populations with direct disturbance by trampling and ATV use. Road runoff is also a threat to one population.

The pondshores need to be protected from direct disturbance by ATVs and excessive trampling. Exotic invasive species must be prevented from colonizing the shores. A natural buffer of at least 200 feet should be established around the ponds to prevent excessive runoff and pollution events.

The few known occurrences for D. wrightianum in New York are from the edges of ponds or vernal ponds along the coastal plain, sometimes within pine barrens (New York Natural Heritage Program 2010). Moist, sandy or peaty areas, low pine savannahs, bogs, the margins of ponds, and cypress swamps (FNA 2003). Wet ground, beaches, and borders of ponds (Gleason and Cronquist 1991).

This grass is only known from the eastern end of Long Island.

This grass occurs on the coastal plain from Massachusetts and New York south to Florida and west on the Gulf Coast of Texas. It is rare from North Carolina north to Massachusetts. It also extends south to Cuba, Mexico, Central America, and northern South America.

This species is a perennial grass which forms small clumps. The erect or ascending stems are from 15 to 50 cm tall, usually hairy, and arise from a basal rosette of ovate to lance-shaped leaves. The nodes are swollen and darker than the internodes. There are 4 to 7 stem leaves, with blades 2-4.5 cm long, 2-5 mm wide, and finely hairy on the lower surface. The primary panicles are 2.5-5.5 cm long and about 1/3-2/3 as wide, and the pedicels are slightly sticky. The spikelets are only 0.8 to 1.1 mm long, the lower florets sterile, and the upper (fertile) ones 0.7 to 0.9 mm long (FNA 2003). Like other Dichanthelium species, Wright's Panic Grass produces two sets of flowers. The descriptions above refer to the primary infloresence. In the "fall phase", from July to October, the stems produce numerous new branches from the nodes. The secondary infloresence consists of panicles hidden in the leaf axils of these new branches, containing cleistogamous (hidden), self-fertilizing flowers (FNA 2003).

Stems with leaves and mature fruits, preferably including both primary and secondary (late season) infloresences are needed for identification.

D. wrightianum is most similar in appearance to D. ensifolium and D. chamaelonche, which are southern species not found in New York (FNA 2003). It differs from its closest New York relative, Dichanthelium villosissimum var. villosissimum, by having smaller spikelets (<1.0 mm long versus 1.1 to 2.5 mm for D. villosissimum) and narrower leaves (3 to 5 mm wide versus 3 to 13) (Gleason and Cronquist 1991).

The mature fruits develop and are visible from late July through October.

The time of year you would expect to find Wright's Rosette Grass fruiting in New York.