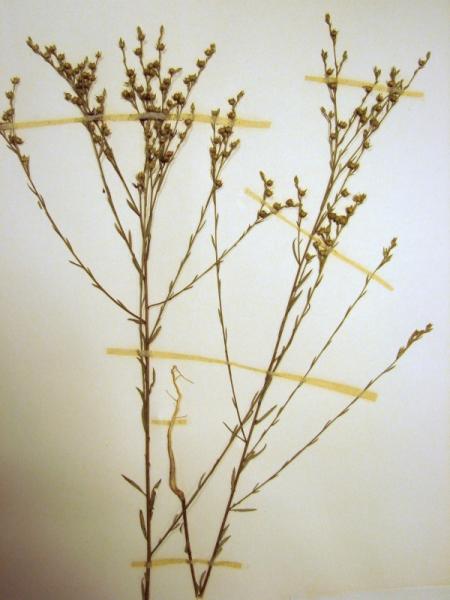 These plants are difficult to find when they are not in flower, because their tall thin stems and narrow leaves blend in well with other wildflowers and grasses. The species name is Latin for grooved and refers to the grooved stems of these plants. It was given that name by John Riddle, a 19th century botanist who received his early training in botany from Amos Eaton at Rensselaer Polytechnic Institute in Troy, New York (Dexter 1988).

There are eight existing populations, but only four of them have populations that contain hundreds of plants. Some smaller populations are threatened by succession, and one population from the 1980s that contained 200 to 300 plants may have been lost to succession. There are 14 historical occurrences, but the likelihood of relocating them is low because many of them were from the fields or roadsides of the first half of the 20th century, that have long since succeeded to forest or have been developed.

The short-term trend seems stable with some variability in numbers from year-to-year, but no existing populations have become extirpated.

This species was never common in New York, but there has been a decline from historical numbers, as open areas have become more forested and land has been developed.

Populations are threatened by direct development of their habitat, and by succession of open grassland and meadow habitats.

Determine the ability of this species to recover from succession by seed banking.

This herb is scattered throughout the state, south of the Adirondacks and north of Long Island.

Yellow Wild Flax's range extends throughout most of eastern and central North America, from Saskatchewan east Quebeck in the north and from Florida to Texas in the south,and including most states and provinces in between.

Sandplain wild flax is an upright annual herb with grooved, branched stems reaching 20 to 80 cm. The leaves are alternate, sessile, and narrow, 1 to 2.5 cm long and 1.5 to 5 mm wide, and have a pair of tiny dark glands at the base. The flowers are borne in panicles with slender ascending branches, with pedicels up to 3 mm long. The sepals are persistent and 3 to 6 mm long with gland-tipped teeth, and the petals are yellow and 5 to 10 mm long. The styles are united for about their bottom third of their lengths. The fruit are oval to round capsules 2.5 to 3.5 mm long, at maturity breaking into pairs of sharp-tipped carpels (Gleason and Cronquist 1991).

Flowering and/or fruiting individuals are needed for identification.

All the other yellow-flowered Linum species in New York are perennial, lack glands on their leaf bases, and have entirely distinct styles. L. rigidum, a similar midwestern and western species, has styles united more than half their lengths, and sepals which are deciduous in fruit.

Flowers June and July and fruits may persist into late November.

The time of year you would expect to find Grooved Yellow Flax flowering and fruiting in New York. 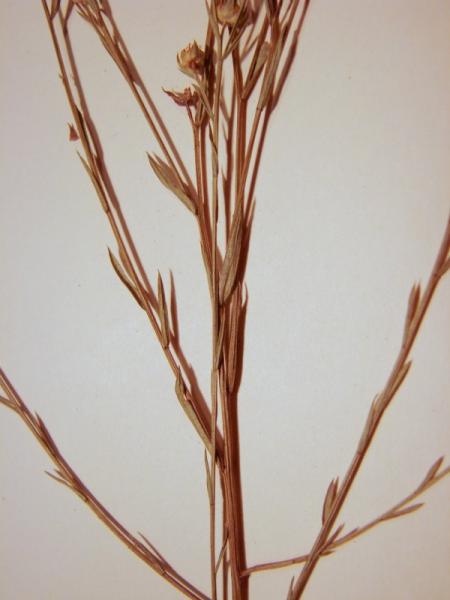 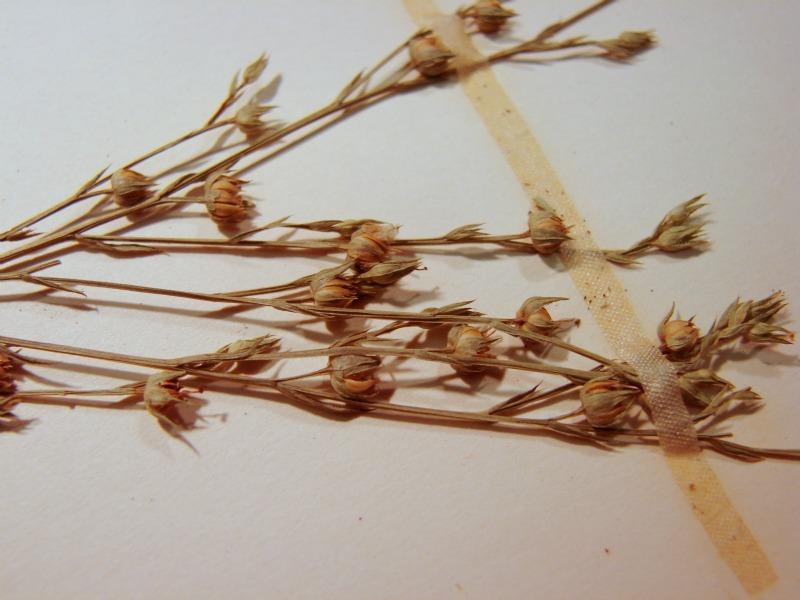 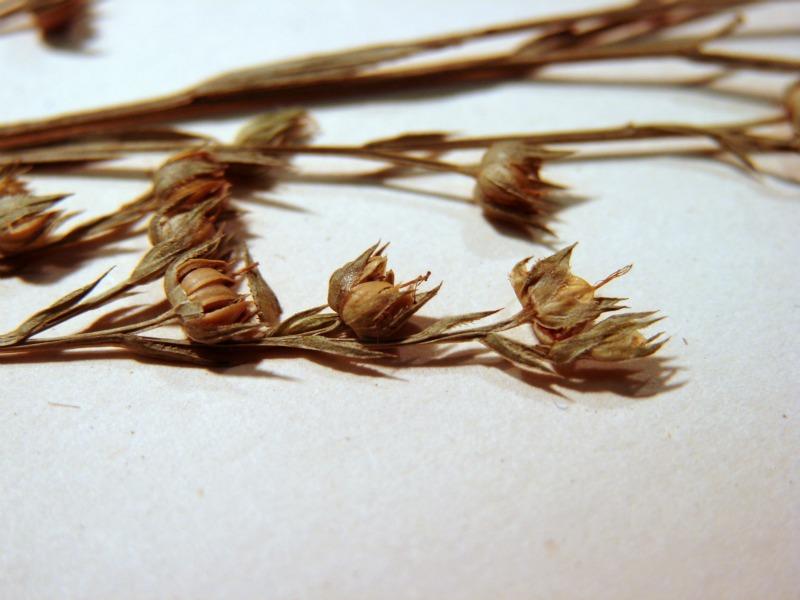 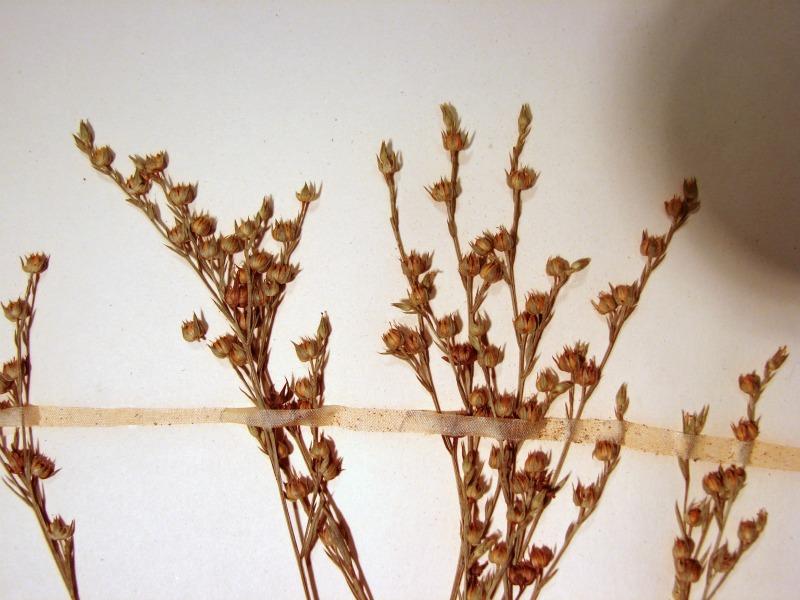 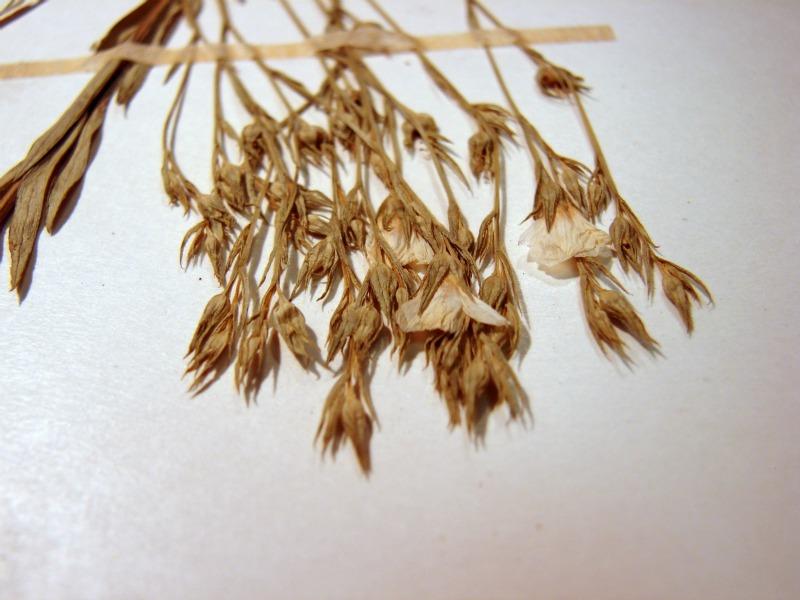