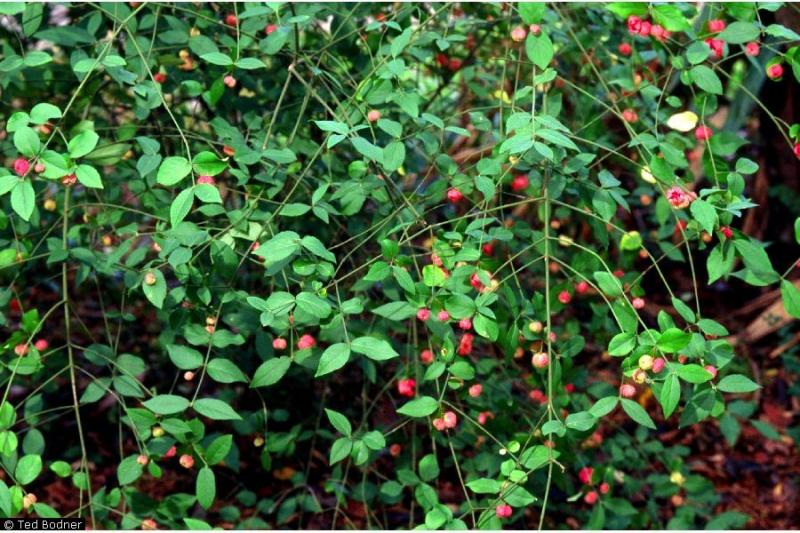 One of the common names, hearts-a-burstin', comes from the way the orange seeds appear to burst from the red fruit when it is mature. These showy fruits certainly make up for the small drab flowers. Shrubs are readily available in the nursery trade but New York is at the northern end of its range so cultivation may not always be successful.

There are five existing populations but none of them exceed 50 plants. There are 14 records known from the late 1800s through 1928 but six of them are extirpated due to habitat destruction and the other seven have not been resurveyed in detail.

Short-term trends seem stable but deer overbrowsing is a new threat that may be decreasing populations.

This plant has always been very rare in New York but populations have decreased in the last 100 years because of development in Western Long Island and the New York City area.

All populations exist in small green spaces surrounded by development. These highly-visited areas provide less opportunity for plants to reproduce and thrive. The overabundance of deer is threatening the long term viability of many populations because of persistent overbrowsing.

Plants must be protected from overt human disturbance and existing populations should be augmented. Reduce the deer herd locally or erect deer fencing to protect individual populations.

Research should be undertaken to determine methods of effective propagation to augment existing populations.

This shrub is currently known from Staten Island and Nassau County on Long Island but historical records exist north from Queens through the Bronx to Rockland County with a disjunct record in Monroe County near Rochester.

This is a species of the Southeastern United States. It ranges from Florida to East Texas, north to Arkansas and east to New Jersey. Its northern limits skirt the southern counties of Missouri, Illnois, Indiana, and Ohio. Its northeastern limit reaches a handful of counties in Pennsylvania and New York where it is rare.

This is an erect shrub with stiffly divergent branches. The uppermost leaves are lanceolate to ovate with petioles 1-5 mm long. The small flowers have 5 sepals and 5 greenish-purple petals that are narrowed at the base. The crimson fruit has 3-5 lobes and is covered in little projections (tuberculate).

The best time to identify the plant is when it is in flower or fruit although it may be identified in leaf only.

Euonymus alatus has a winged stem and a 4-merous flower. E. obovatus is a trailing shrub, possibly with a few ascending branches and obovate uppermost leaves.

The time of year you would expect to find American Strawberry Bush vegetative, flowering, and fruiting in New York. 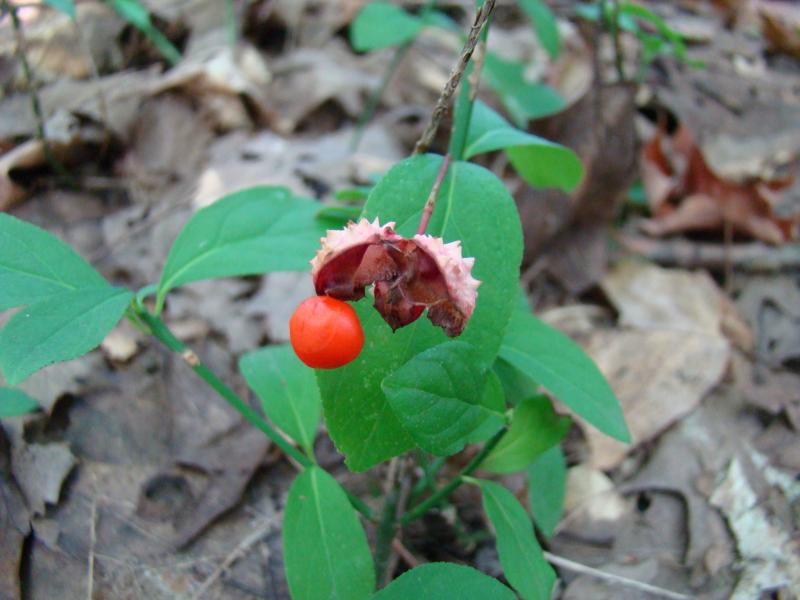