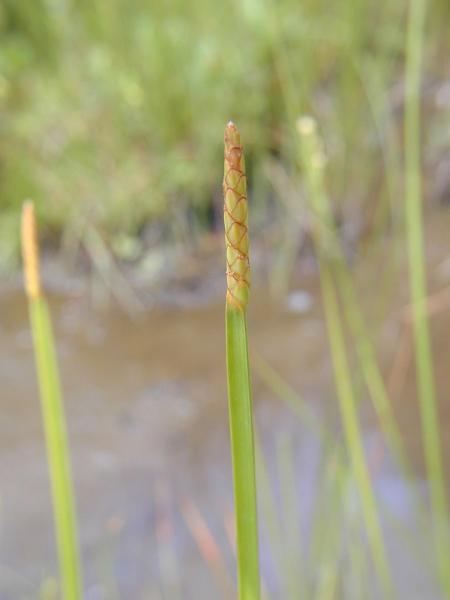 This is the only Eleocharis species in New York with a tall square stem, thus the species name. The genus name Eleocharis comes from the Greek "elos" for marsh and "charis" for grace. This and many other Eleocharis species are important wildlife food for wetland birds and other animals. You can often see damselflies and dragonflies perching on the tops of the stems.

There are four existing populations but only one of them is large. The three other populations are small or threatened by development. There are about 10 historical populations, some of which need to be checked and some are considered extirpated.

The short term trend seems to be declining but more surveys are needed to determine this more accurately. One large population was in an area slated for development on Staten Island and other existing populations are in unprotected lakes.

This species has probably declined from historical populations since many of them exist in lakes in highly developed areas. There are about 10 historical localities which have been extirpated or not relocated in recent years although one population from 1938 was relocated in the late 1990s in Central New York.

Many of the ponds have water levels that are manipulated or have boat traffic that can threaten these plants. Shoreline development is a threat to one large population. European alder may also threaten one population.

Keep shoreline plants from being destroyed by direct human development and by erosion from boat traffic.

More research could be done with techniques designed to augment populations at existing sites. We would also like to know what limits its distribution along shorelines.

In New York this species occurs on the mucky bottoms of two shallow, artificial ponds, and along the rocky shoreline of a lake. More information on its habitat requirements in New York is needed (New York Natural Heritage Program 2007). Pools and creeks (often tidal), chiefly of the Coastal Plain (Fernald 1970). Shallow water (Gleason & Cronquist 1991).

The only known, extant populations of Eleocharis quandrangulata in New York are from Staten Island, Long Island, and a single population from a lake in Cayuga County. It has also been collected from the Lower Hudson Valley, and Oswego County in Western New York.

Eleocharis quadrangulata reaches the northeastern edge of its range in Ontario, New York, and southern New England, is present in most of eastern US south as far as Florida, Texas and central Mexico, and through most of the Mississippi Valley to Wisconsin. There are disjunct populations in California and Oregon

Spikerushes consist of a simple stem (the leaves bladeless and inconspicuous), with the infloresence a solitary, many-scaled spikelet at the top of the stem. The perianth (sepals and petals), if present, is reduced to bristles. The base of the style is expanded into a tubercle, and is usually persistent on the fruit (achenes). Eleocharis quadrangulata is perennial, from a rhizome. The stems are 30 to 105 cm tall, and, unique among spikerushes, are sharply 4-angled and spongy. The spikelet is about 2-7 cm long. The achenes are biconvex and finely reticulated (at 10 to 15x magnification), and are 1.8 to 3 mm long.

This species is best identified with mature fruit, though it may be possible to identify it from its quadrangular stem.

The four-sided stesma are unique among New York Eleocharis species. Eleocharis equisetoides may appear superficially similar, but has a terete stem and is septate.

Eleocharis quadrangulata flowers in July and fruits may be seen mid-July through to mid-October.

The time of year you would expect to find Square-stemmed Spike Rush vegetative and fruiting in New York. 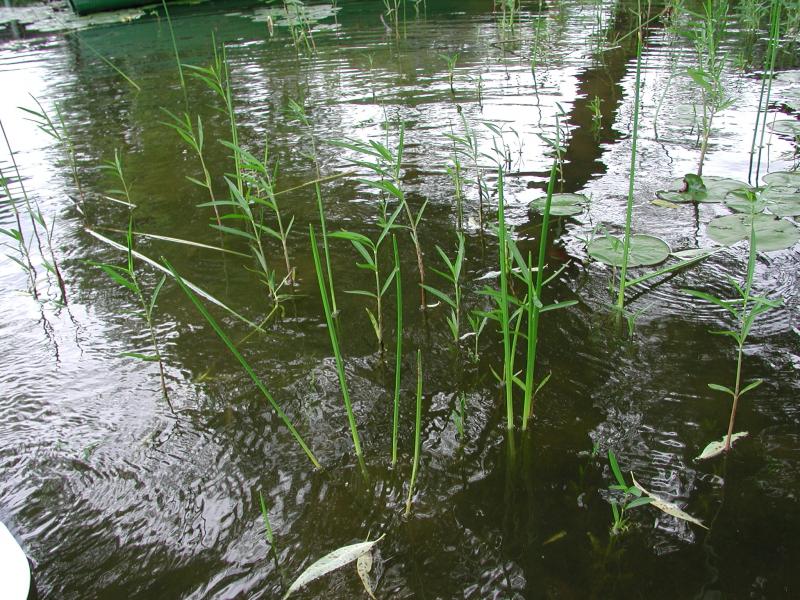